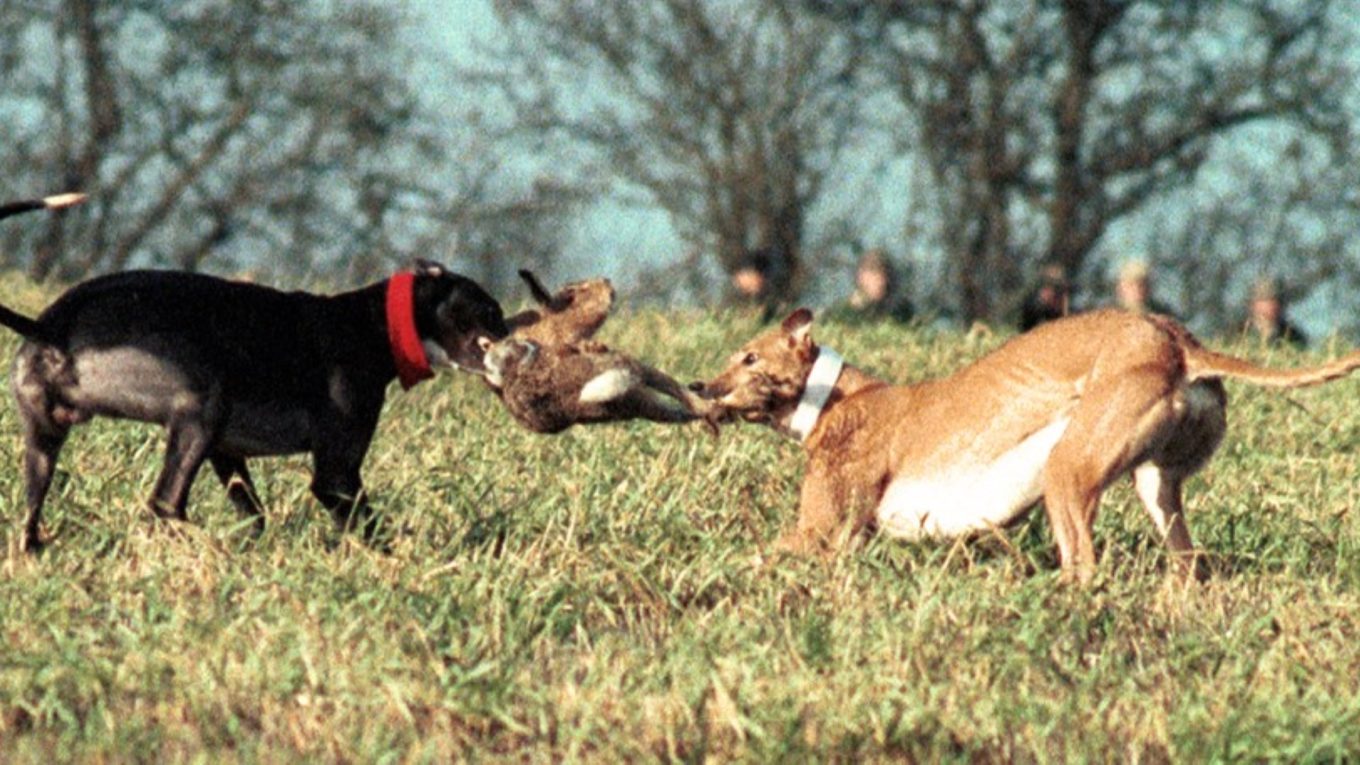 A recent newspaper report from Scotland titled ‘Illegal hare-coursers threatened to ‘burn down’ Angus farm’ highlighted the ongoing problem with a form of wildlife abuse that was supposed to end with the passing of the Hunting Act 2004. But what is ‘hare coursing’ and what can be done to tackle it?

Originally introduced by the Romans some two thousand years ago, there were about four million Brown Hares in Britain in the late 1800s. Once a familiar part of the countryside, our fastest-running wild mammal has declined by more than 80% during the past 100 years. In some parts of Britain, particularly the south-west, the Brown Hare is almost a rarity and in some areas may be locally extinct.

There is always more than one reason for a species to decline so markedly, but intensification of agriculture and the loss of biodiverse grasslands certainly appears to be the major factor. Hares don’t hibernate or store appreciable amounts of fat in their bodies and so need a constant food supply throughout the year. 95% of the hay meadows hares used to call home have been destroyed or converted since the Second World War.

The 2018 “A review of the population and conservation status of British mammals” put the UK Brown Hare population at around 579.000 (down from 817,000 in 1985), and suggested that overall numbers appear to be stable. They do state though that “…human management – suppression of the population during specified times of year by culling” may be a driver of change to that assessment. An additional new threat has come from the first UK discovery of the deadly rabbit haemorrhagic disease in Brown Hares after reports of a high number of sick and dead hares being found across East Anglia last autumn.

Despite the risk to the overall population, ‘culling’ of Brown Hares does still take place. Whilst the species is the subject of a Species Action Plan under the UK Biodiversity Action Plan (which has so far failed to expand existing populations), they have minimal legal protection. Because they are considered a game species they can be shot throughout the year, including – ridiculously – through their breeding season. They are the only so-called ‘game species’ in the UK without a closed season, a period when hunting would be prohibited to allow recovery of the population.

Shooting organisations admit that in some areas Brown Hares are scarce, but claim that in others they can be extremely abundant and ‘need control…to prevent serious damage to farm crops’. The pro-wildlife Hounds Off website disputes this, saying, “A scientific report (Harris and McLaren) says that damage to cereal and grass crops is so low as generally not to be noticed. Hares can sometimes be blamed for the damage caused by rabbits, but the light grazing by the hares actually produces a ‘tillering’ effect, which can actually cause additional shoots to sprout and increase crop yield. There can, in rare cases, be some damage to crops like peas, vines and sugar beet, but this is still small scale and in general farmers are not concerned. Hare damage to forests is negligible. Therefore, talk of hares as an agricultural pest is more likely to be an excuse to justify mass shoots.”

A staggering 350,000 Brown Hares are killed in England in legal organised shoots each year, including thousands of female hares who are pregnant or nursing dependent young.

There are also over 70 registered harrier and beagle packs in the UK, who still illegally hunt hares. 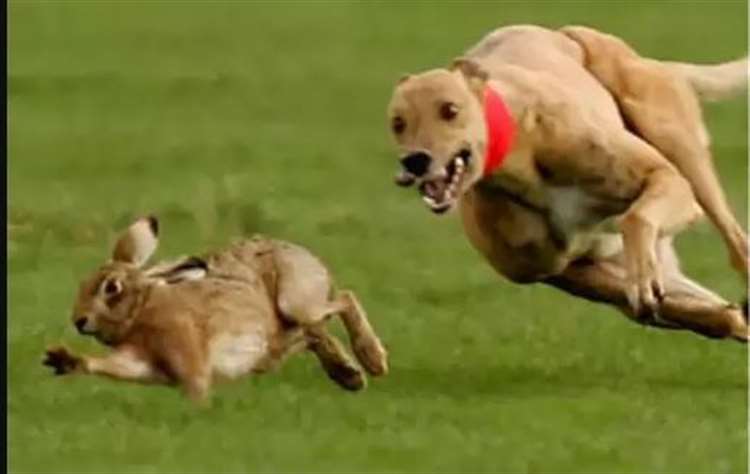 Hare coursing is an added – and especially cruel – pressure on Brown Hares, and is a serious problem in some areas of the UK (notably the Fens and East Anglia, where fields are large and flat). Coursing normally peaks in autumn after fields have been harvested, giving hares no place to hide.

Banned under the Hunting Act 2004 (which made hunting wild mammals with hounds illegal, and also made the participation in or publicity of a hare coursing event an offence), hare coursing involves lurchers or greyhounds. The dogs compete against each other in pursuit of a live hare, and bets are placed on which of the dogs will be the quickest to turn and catch the hare.

Whilst Brown Hares evolved to sprint at high speeds for short periods to escape predators (they can reach speeds of 45mph (72km/h)), they don’t have the stamina of dogs which can continue the chase until the hare is exhausted.

Coursers often claim that caught hares die instantaneously from the bite of one dog, however, hares are often unsuccessfully grabbed several times by the dogs causing terrible injuries and stress. Hares are killed by “ragging” – shaking the animal in its teeth – and are sometimes heard screaming in terror and pain as the dogs fight over them. Veterinary autopsies show that hares caught by dogs suffer terrible internal injuries and trauma.

The government inquiry into hunting with dogs which led up to the Hunting Act concluded in 2000 that ‘It is clear, moreover, that if the dog or dogs catch the hare, they do not always kill it quickly.

The dead hare is usually left in the field or thrown in a ditch. 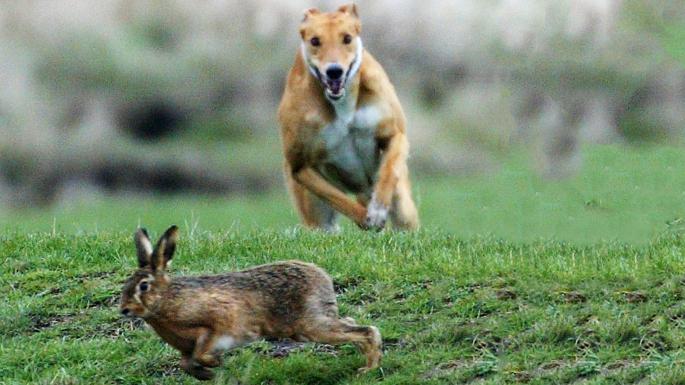 Hare coursing has, to quote Norfolk Police, “a terrible impact on rural communities” [and of course on the hares themselves].

Coursers are violent, are often linked with organised crime, have no respect for property or crops, and routinely subject people and families to fear and intimidation. Offenders are known to travel to selected areas from around the country, even crossing the border from England into Scotland.

The police have responded by setting up Operation Galileo. Begun by Lincolnshire Police, it’s a nationwide approach to prevent hare coursing which has now been adopted by 12 police forces.

Their collaboration includes identifying key offenders, gathering and sharing intelligence, and exploring civil and criminal powers to take enforcement action (which includes taking dogs from coursers and crushing their vehicles).

Similar declines in coursing have been noted in other counties – but the statistics demonstrate just how common this crime is.

How can we help tackle it?

Hare coursing is cruel, and it’s a crime. Our natural instinct might be to try and stop it BUT DO NOT under any circumstances approach or try to tackle coursers. As already stated, coursers can be extremely violent.

Having said that, we can still recognise coursing and report it to the police.

The most obvious sign of hare coursing is a group of vehicles parked in a rural area with dogs, perhaps by a gateway to farmland or on a grass verge. Coursers can sometimes be seen walking along a field with their dogs hoping to flush a hare into the open.

Again DO NOT under any circumstances approach or try to tackle coursers.

Werritty - because grouse just exist to be shot?
Suffolk police and the Wildlife & Countryside Act
Egg thief Jeffrey Lendrum denied early release
Podcast: Dr Cathleen Thomas | RSPB Hen Harrier LIFE Report
Countering the persecution of Peregrines
Ireland | 1,200 'protected' hares held for coursing released into the wild
Fox Hunts | How Many?!
While we were in lockdown, the wildlife criminals were out in force
RSPB Scotland | Another Hen Harrier shot
Shooting - at least the Conservatives have a policy? 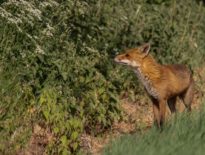