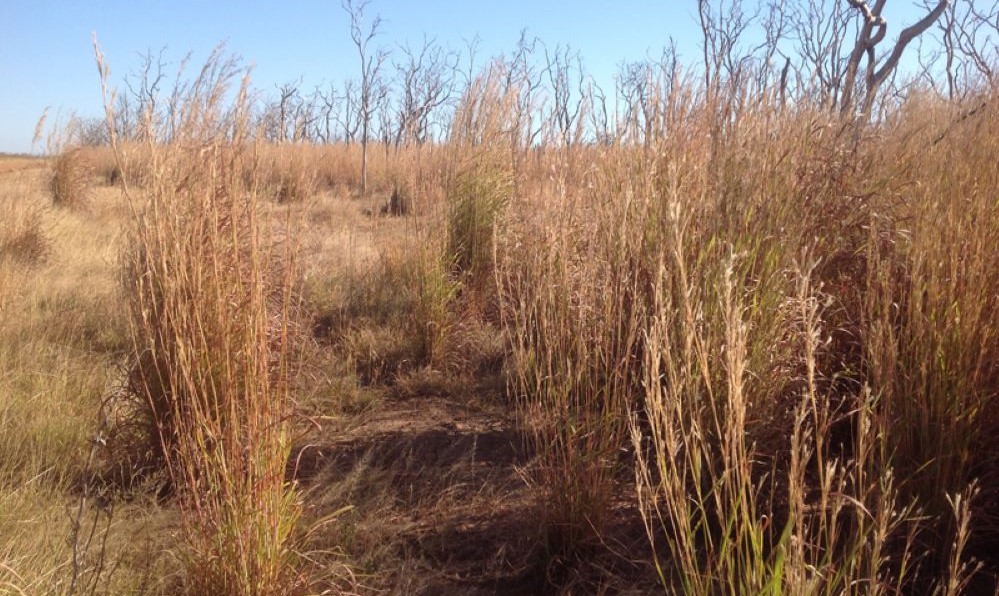 Our War on Wildlife takes many shapes. Some of what we do is deliberate and targeted – the illegal wildlife trade and hunting for example. In other instances we humans have waded into an ecosystem and tried to ‘fix’ something by introducing a new species into the environment (often linked to agriculture, pest control, or for sport). Some introduced species cause few problems but others establish themselves and cause significant ecological damage, when they become known as ‘invasives’.

There are many examples of invasives, from cats and rats to fish and plants. And many ecosystems, especially on islands where species evolved in isolation and unused to the threats many invasives bring with them, have been catastrophically impacted.

One of those islands that has suffered extremely badly is Australia.

Until the arrival of Europeans, Australia was a fantastically biodiverse country with huge populations of species specifically evolved to local conditions and local predators. Settlers immediately began changing the landscape, clearing vast areas for livestock and crops, and introducing species that in many cases have no natural predators or controls. Perhaps the best known (outside of the country itself anyway) are European Rabbits and Cane Toads (the latter is the world’s largest toad and was introduced to control a crop pest, which the toads have ignored killing huge numbers of native species instead).

There is though another less well-known invasive that is set to wreak ecological havoc in Australia: Gamba grass Andropogon gayanus.

Gamba grass (or Rhodesian bluegrass) is a robust grass from Africa that was introduced in the 1930s to northern Australia’s ‘Top End’ as a pasture grass for the burgeoning cattle industry. In 1942 it was also introduced to Queensland, but large-scale planting only began around 1983. In 1986, after much trial and error, the Northern Territory Department of Primary Industries developed a cultivar that was, in the words of their own register notes, “easily established”, “highly productive”, “drought-resistant”, “adapted to seasonally wet tropics”, and “adapted to a wide range of soils”. These characteristics, desirable to DPI at the time, also made gamba grass an aggressive weed.

Despite assurances that Gamba grass could be safely contained within heavily grazed paddocks, as plants so often do it quickly escaped, established and from there spread into native savanna. It now grows in the east Kimberley region of Western Australia, in the northern parts of the Northern Territory, and in coastal and sub-coastal areas of North Queensland. Carried by the wind, on vehicles, and by people and animals, the rate of spread of Gamba grass is among the highest of any invasive plant in the world.

Why does this matter though? Because Gamba grass grows up to four metres tall and can produce up to five times the biomass of native Australian grasses. In the highly flammable savanna environment of Australia, Gamba grass has proved catastrophic. 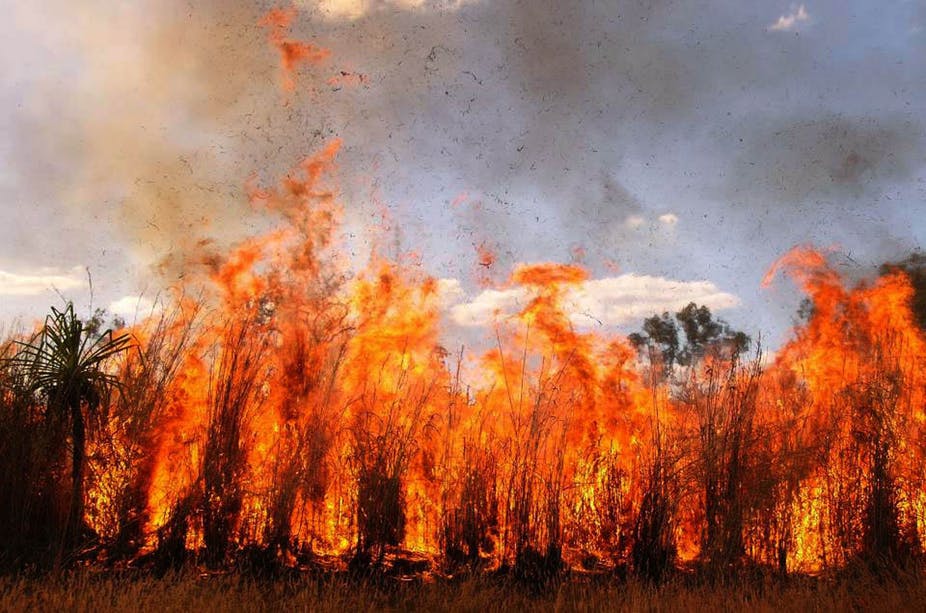 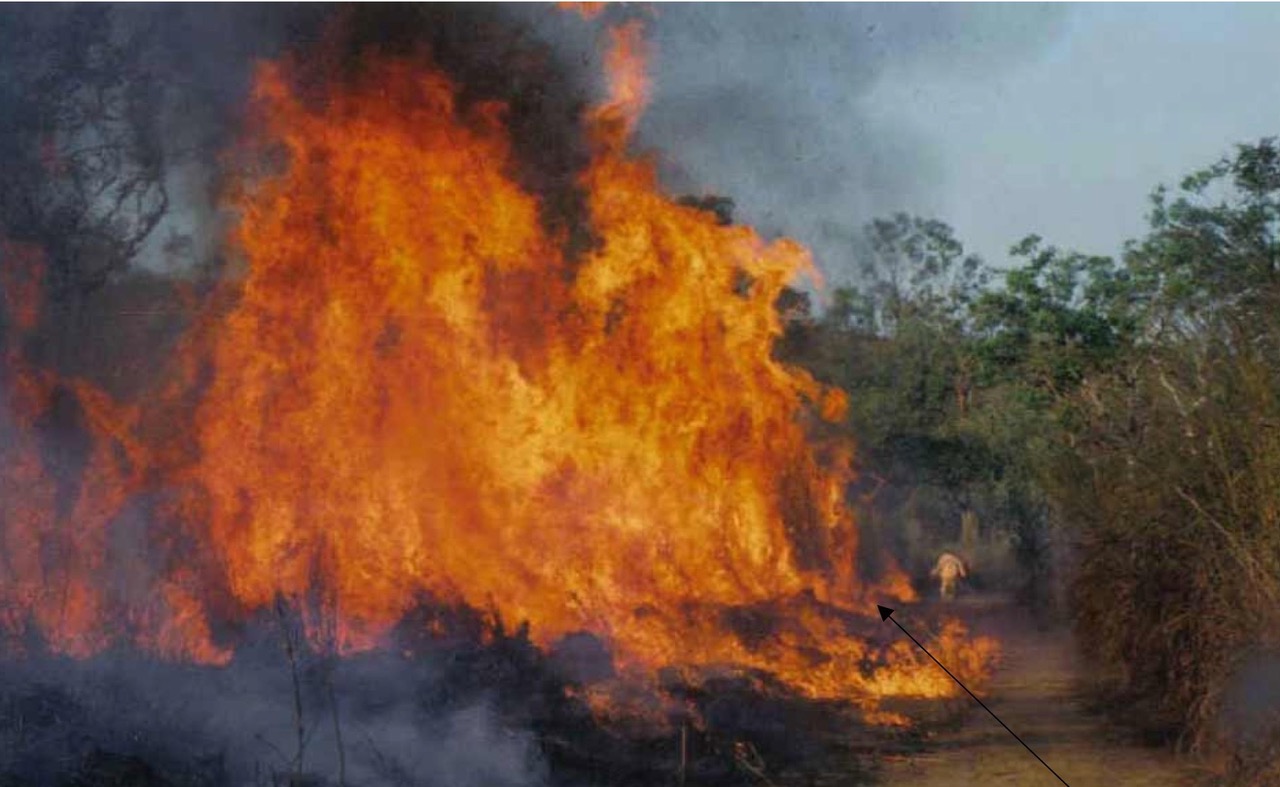 Native savanna trees have evolved to cope with fire, but fires there while frequent are typically of low intensity and low to the ground. Growing so tall, Gamba grass spreads fire high into trees. New research has found that where it comprises the bulk of ground cover, the tree cover and the habitat those trees provide to threatened native marsupials can decline by 50% in less than five years due to fire mortality.

The spread and impact of Gamba grass has been so severe that just a few decades after its (deliberate) introduction the Australian government notified the plant as a Weed of National Significance. It is also a declared weed throughout northern Australia, meaning that landowners are legally responsible for controlling Gamba grass on their property.

Denise Lawungkurr Goodfellow, a semi-retired birdwatching/natural history guide, author and biological consultant, has been warning about Gamba grass for many years. She is also testing eco-friendly methods of control of Gamba grass around her own property in the Northern Territories, as she explains in the guest post below. 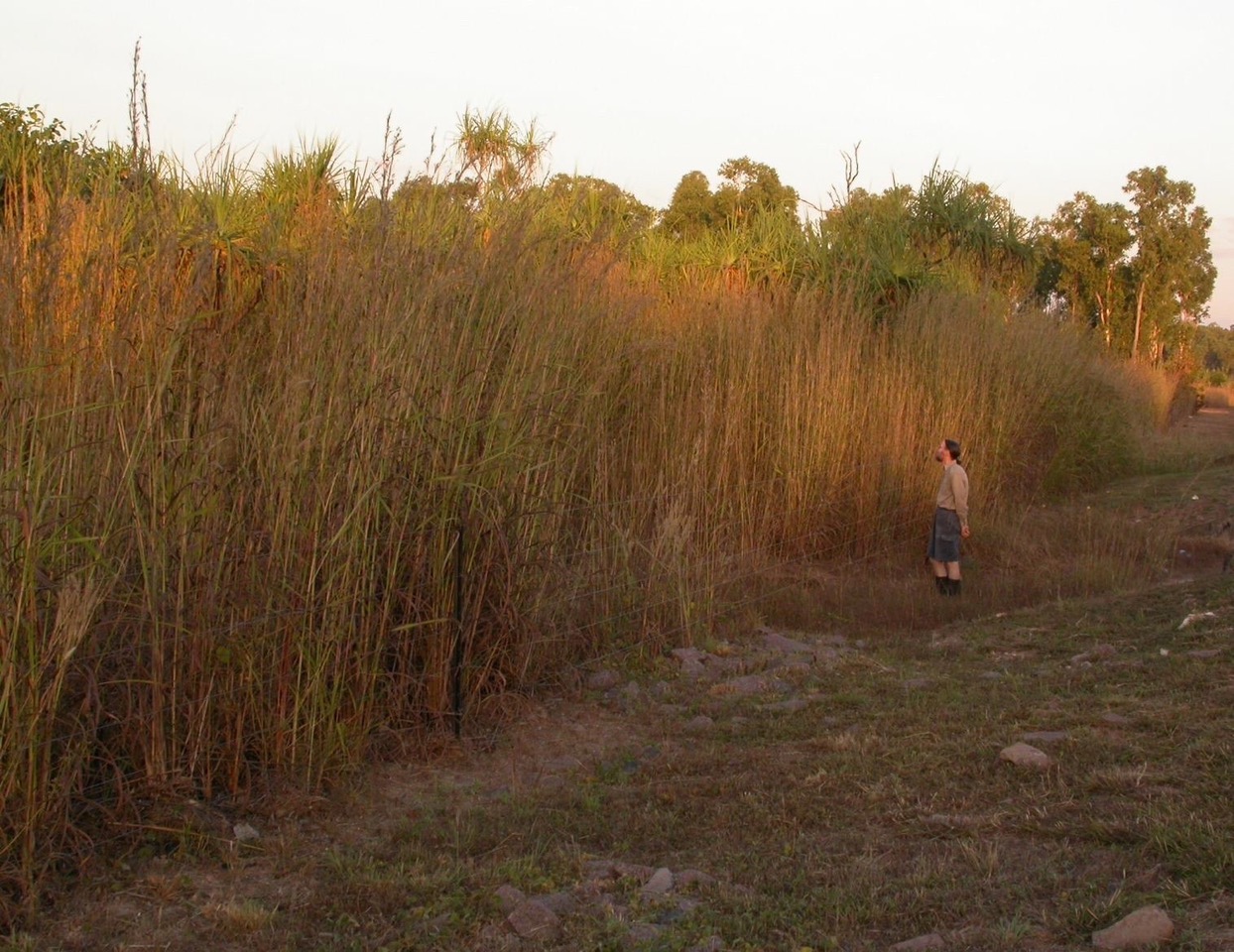 I first encountered Gamba grass, Andropogon gayanus, about twenty years ago while working as a birdwatching guide and biological consultant. The ramifications that this four-metre high weed could have for fauna and flora were obvious. Gamba was rapidly spreading, transforming woodland into monotypic grassland by outcompeting native plants and fueling dangerous conflagrations. Vegetation that had evolved over aeons to carry cool fire died, from tiny grasses to the tallest stringybarks.

But in town people were more concerned about cane toads; Gamba rarely rated a mention. So when partner Michael and I launched Birds of Australia’s Top End at Government House in 2005 we invited prominent citizens as well as Gamba scientists, Samantha Setterfield and Michael Douglas. We hoped they could impress on these leading citizens that the weed was a serious threat. It seemed to make little difference. The citizens of Darwin were more concerned about cane toads.

In 2009 I gave the McNeill-Sims lecture at the North Carolina Botanic Gardens, USA, and there spoke of the danger that Gamba posed to Top End flora. The politicians, academics, and ordinary citizens who attended took it seriously as did American birdwatchers who attended my other lectures – they realized that iconic plants and birds could disappear. Birds such as Gouldian Finch, a species all had heard about and wanted to see at some stage. Not so Australians, who still seemed more concerned about cane toads.

We gained a greater perspective of the problem when we moved to Darwin River in 2013. Our twenty-acre property is quite diverse in flora and fauna and so far we have recorded over seventy plant families including 25 genera of native grasses, about ninety bird species, nine mammals, 24 reptiles, ten frogs, and dozens of insects, including a moth related to, but rarer than the Atlas Moth, Opodiphthera carnea, and a spider-eating fly belonging to a family, Acroceridae, never recorded before in the Top End (thank you, Graham Brown, for that identification). This insect (below) has a huge orange abdomen and when I added a photo to the NT Field Naturalists’ Facebook page, one wit labeled it the “Kim Kardashian of flies”!

Apart from one plot covering about an acre the previous owners had kept the property largely Gamba free.

They had used the herbicide Roundup on the large patch, but also hand-weeded outbreaks that occurred elsewhere. And being surrounded by Gamba-infested properties they had to weed continually. They also mowed extensively, in particular a few acres of largely native grassland to the southeast of the main dwelling, after a large wildfire coming from that direction in 2006 had nearly engulfed the house and outbuildings.

We were concerned about the potential problems that could come with the use of Roundup. For example, glyphosate has been found to render bees more susceptible to disease (Motta, Rayman & Moran, 2018).

Ramifications for human health are now coming to the fore. It is now well known that Roundup’s producer is being sued by users suffering non-Hodgkins lymphoma, a type of blood cancer. Less well known is research demonstrating that glyphosate apparently benefits some rather nasty bacteria found in the gut of poultry by reducing beneficial organisms (Shehata, Schrodl, Aldin, Hafez & Kruger, 2013). Glyphosate has also been linked to antibiotic resistance (Kurenbach, Hill, Godsoe, van Hamelsveld & Heinemann, 2018). Therefore, we decided to limit our use of Roundup.

The big patch of Gamba we slashed and then overlaid with old sheets of corrugated iron. This eradicated the weed completely, but not native herbs, sedges and grasses – they sprouted en masse after removal of the iron some months later. I also began to experiment with household vinegar (4% acetic acid) on isolated Gamba plants and other weeds. Poured on the base of the plant it killed everything without a deep taproot and much faster and more thoroughly than Roundup (in the case of small plants in a few hours vs. two days).

Furthermore, vinegar finished off a tussock of four metre high Gamba grass within three days. Testing showed that bending the Gamba stems over and stamping on them prevented all regrowth. Furthermore, once the grass was flattened even if it did catch fire it was lying on the ground and not reaching into the trees. Standing Gamba grass acts as a “ladder” for flames to reach the upper canopy of trees (Setterfield, Rossiter-Rachor, Hutley, Douglas & Williams, 2010).

The use of iron sheets and vinegar meant that the weeds died in situ, thus there was no disturbance of the surface soil or soil structure. However, I did remove by hand smaller plants, one reason being that vinegar is relatively expensive. It is also corrosive to metal and rubber and thus cannot be sprayed as Roundup can.

However, a neighbor with a background in chemistry is experimenting with cheaper, less corrosive but still biodegradable products and we’ve ideas for a spray pack that does not use metal or rubber.

Despite Roundup’s drawbacks it will continue to be the weedkiller of choice for landholders, business and government. However, what may be a game-changer is herbicide resistance. According to the Australian Glyphosate Sustainability Working Group it is “highly likely that unconfirmed populations of glyphosate resistant… weeds are present but unrecorded”. Already several weeds are resistant to glyphosate, and it’s probably just a matter of time before this issue arises with Gamba. Authorities should be working on Plan B, if not C.

A couple of surprises came when we reduced mowing and the use of Roundup.

Firstly, several herbs, grasses and sedges appeared that we had not previously recorded. Others expanded their range and some even seemed to act as brakes on weed species. We also noted that Gamba and other weeds did not grow under some trees, for example, Black Wattle, Acacia auriculiformis, and Soap Tree, Alphitonia exselsa. Their leaves contain saponins a soap-like substance, a natural weedkiller.

Secondly, cathedral termite mounds began to grow in our grassland. Now, four years later we have a ‘city’ of forty or so mounds, some over five metres high. By the height of the fire season most of the ground cover throughout that area has disappeared, and it seems we should be thanking our army of little neighbours. Research on grass-eating termites in Africa showed that the foraging activity of termites will reduce grass and litter by 25% (Wood & Sands, 1978, p. 281). Ours seem to do even better! The mounds may also act as wind and firebreaks, and along with the lack of ground cover, could mitigate the threat of wildfire coming through the Gamba-infested properties around us. And it has happened with minimal effort on our part.

As with attitudes to cane toads it’s going to take time to bring about change in attitudes towards Gamba grass, time that landholders and firefighters may not have. But more needs to shift than just attitudes. The present Government needs to pour more resources into this battle. And I’m not blaming them. They inherited this growing monster and have done much more than governments before them to deal with it.

If those whose lives are on the line in this fight aren’t worth as much to voters as a new netball court or car park under State Square, then perhaps those of Gouldian Finch, the “Kim Kardashian of flies” and a bunch of other wildlife are. Time will tell.

The calendar features pictures of birds including the Crimson Finch, the Partridge Pidgeon, the Varied Lorikeet, the Little Kingfisher and the Red-backed Fairy Wren. For more information please go to Birds of Australia’s Top End 2020 calendar. 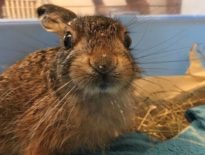 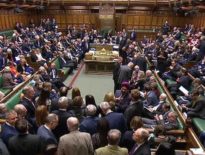