The Scottish Government has finally released the ‘independent’ (can a panel containing representatives of the grouse shooting industry truly be described as independent?) Werritty Review into the future of grouse shooting in Scotland. After much delay, the report recommends – more delay.

The one recommendation many conservationists were hoping for from this Review was the licencing of grouse moors. Not the shutting down of grouse moors after years of wildlife crime (crime that provably has suppressed Scottish populations of Golden Eagles and Hen Harriers for example), the massive toll of native wildlife in traps and snares, the appalling annual slaughter of Mountain Hares, and the destruction of precious moorland habitat – just licencing.

Early signs were that ‘Werritty’ (chaired by Professor Alan Werritty, hence the name) appeared to at least agree that licencing was an option. Without a licence (which could be removed for criminal behaviour) an estate would be forced to close down. Under the recommendations of the review, though, estate owners need not tremble in fear of losing their huge profits for at least another five years. The ‘independent’ (etc etc) panel unanimously recommended a licensing scheme for shooting grouse in Scotland but opted for a five-year moratorium to allow the grouse shooting industry to get its act together. To clean up its own house. To turn around years of – you know, illegally killing stuff, and – er, to try to stick to the laws of the land that the rest of us feel we should abide by. A last chance saloon, one that, as Raptor Persecution UK tartly puts it, “industry figures will be familiar with…they’ve been quaffing free champagne in there for decades.”

The War on Wildlife Project has always questioned the effectiveness of licencing shooting anyway. For one thing, existing laws should be stopping wildlife crime, but enforcement is incredibly difficult when the communities these criminals operate in have traditionally been less than inclined to rat out their own. Werritty himself (in the slightly obtuse phrasing of a life-long academic) says, “confirming the scale of the illegal killing of raptors is challenging and such criminal activity admits to no easy resolution“. How does licencing fix that?

And assuming that some sort of licencing does eventually come into force, experience with the Hunting Act 2004 suggests that influential pro-shoot lobbyists will riddle the regulations with more holes than you’d find in a swiss cheese as it makes its way through parliament. And there will be arrows signposting the ways to get around them so blatant that a first-year law student could probably get their clients off with the equivalent of a minor parking offence.

But perhaps the most irritating thing about this whole process has been the acceptance from the outset that Red Grouse, stunningly beautiful birds perfectly adapted to the tough habitats they live in, exist solely to be killed. The Werritty Review was never intended to look at the ‘rights’ of sentient beings (at least, that’s our understanding), but while perhaps there is an element of ‘working with what you’ve got to work with’, why is there not more of a challenge to the thud of dead birds falling out of the sky between August and December? Don’t we like Red Grouse?

Licencing might – at a pinch – just make a difference to some of the most heavily persecuted birds of prey in the UK, but will make no difference at all to the half a million grouse dying for the entertainment of shooters. Or the unknown numbers of native foxes, stoats, weasels, and corvids wiped away from the Scottish countryside like so many inconveniences. Licencing merely further legitimises and frames the massacre of wildlife.

The British public are still a long, long way off from challenging the status quo established in long-gone times that wildlife is little more than a resource waiting to be exploited, or that being able to afford to travel, own a gun, and buy a day’s killing doesn’t make it right to do so. But that is surely the direction a civilised society should be moving in?

And surely one that ‘conservation’ should be moving in as well. 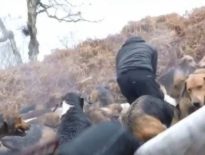 Blog Posts Is the average fox hunter a psychopath according t… 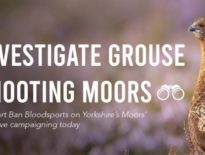