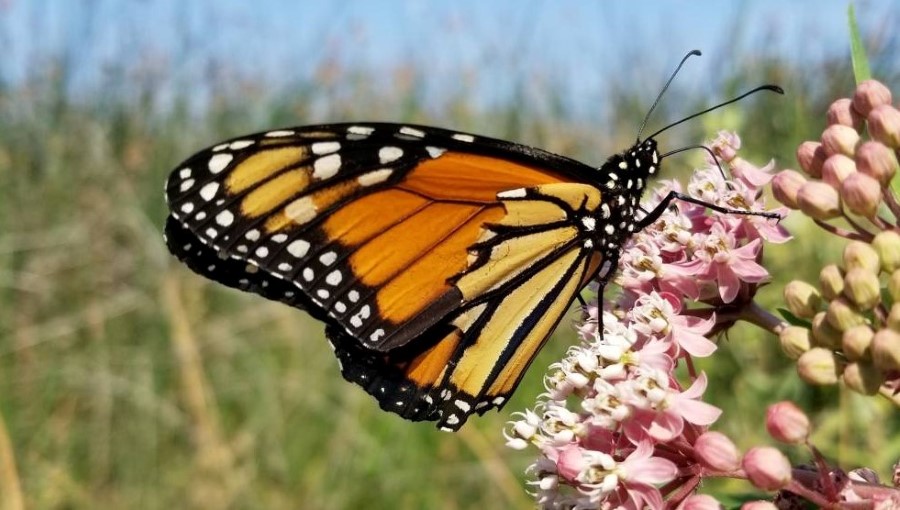 The Monarch butterfly Danaus plexippus is one of North America’s most iconic species. The Center for Biological Diversity describes them “as American as apple pie, having once been found in backyards across the country. Generations of schoolchildren have reared monarchs in classrooms, watching in wonder as striped caterpillars transform into large orange-and-black adult butterflies“.

Largely geographically separated into two genetically identical groups – eastern and western – Monarchs are famed for their long-distance migrations. Wintering into Mexico, but breeding all the way into southern Canada, vast numbers of Monarchs made what was once thought to be a round trip of thousands of miles. Unlike birds, however, individual butterflies don’t complete migration both ways. The adults which emerge in the early summer season have a short life span and live for only about two to five weeks. They mate, lay eggs, and die along the route to northern parts of their range. It is, in fact, the fourth longer-lived generation (the great-grandchildren of the butterflies that set off from wintering areas in the south) that arrive eight months later back at the starting point to overwinter. 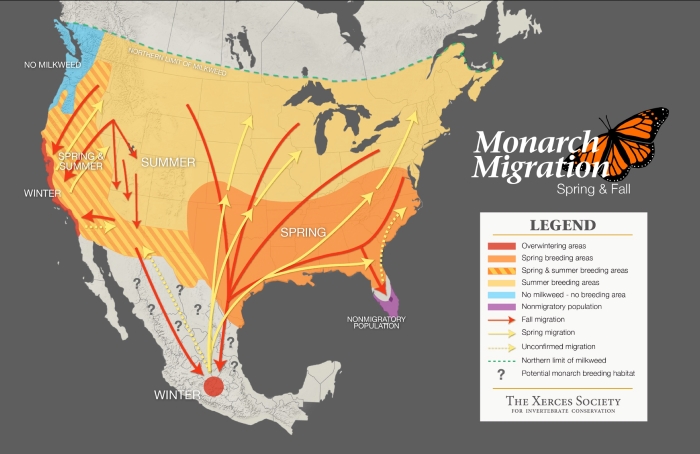 Along the route, Monarchs depend on finding the only food their caterpillars feed on: the Milkweed, a wildflower of fields, wetlands, and prairies. Milkweeds are not only the foodplant of Monarch caterpillars, they protect them too. Chemicals within the plant are stored in the caterpillars strikingly bright body which make them distasteful to predators. These chemicals are kept when the caterpillars metamorphose, shifting to different parts of the body (mainly the wings and abdomen) when the adult’s bright colours also ‘warn’ off birds.

Numbers of the more-common eastern Monarch, found east of the Rocky Mountains and overwintering at high altitude in the Sierra Madres in central Mexico, have declined by more than 90 per cent since 1996, but they do now appear to be stable; western Monarchs, on the other hand, which winter at some 200 sites along the Pacific coast in California, are crashing. According to the Xerces Society (a non-profit environmental organization that focuses on the conservation of invertebrates), their population plummetted by ~97% of their average historic abundance between the 1980s and mid-2010s. In winter 2018–2019, the population dropped even farther, to fewer than 30,000 individuals.

That represents a single year drop of 86% and a drop of >99% since the 1980s. Monarch populations have always fluctuated, but researchers think that the western population may now have reached what is known as a ‘quasi-extinction threshold’ at which any normal or ‘ordinary’ environmental variation could cause a drop below a point from which extinction is inevitable. Almost unbelievably (given its abundance in the 1980s), the western Monarch may already be ‘functionally extinct’ – ie at the level at which a reduced population no longer plays a significant role in ecosystem function. 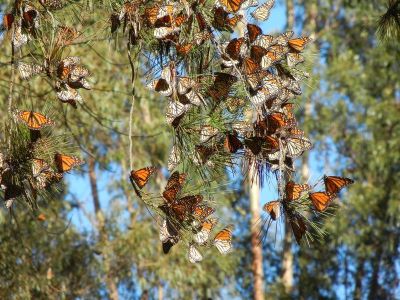 How could a butterfly that was once found in the millions (a figure derived from survey counts made at wintering sites) lose more than 99% of its population in less than half a century?

Precipitous population decline is rarely down to a single factor (though the example of the Bramble Cay melomys, the first mammal to go extinct entirely because of rising sea levels, may mean that in the future that is no longer true). Western Monarchs have been hit hard by a combination of problems that include habitat loss and habitat change (through increasing urbanization and intensive agriculture), pesticides, and climate change – problems that, as with so many of the issues highlighted on this site, are down to us.

Samantha Marcum, a biologist with the U.S. Fish and Wildlife Service, says that one major reason for the drastically reduced numbers is the loss of coastal forest groves, where Monarchs can safely roost in the winter months, and shrinking springtime breeding habitat, lost to land development, forest management practices and wildfire. The Xerces Society says that “each year, overwintering sites—even some which are legally protected—are destroyed or damaged by human actions like development or inappropriate tree trimming, sometimes leading to total abandonment of a site by the butterflies“.

A July 2019 report in Frontiers of Ecology and Evolution looking at probable causes for the ‘plummeting population’ again points “to the importance of monarch habitat in winter and early spring, prior to the breeding season“. The authors also say that analyses of long-term trends reveal that “insecticide and herbicide use were almost as tightly associated with monarch declines as overwinter habitat loss“. They suggest “avoiding herbicide applications that damage monarch breeding and migratory habitat such as milkweed and wildflowers”. These recommendations, they say, apply to home gardens and lawns, as well as land used for agriculture. The powerful glyphosate ‘weedkiller’ Roundup (the world’s most widely-used herbicide) is almost habitually sprayed on gardens as well as farmland, and the increasing use of genetically-modified (GM) crops (which became prevalent in the 90s and are resistant to Roundup) means that its use has exploded. While GM crops remain standing after spraying, most other plants – including the milkweeds that Monarch caterpillars depend on – are destroyed.

Herbicides are not the only poisons sprayed on vast acreages of North America. Neonicotinoid insecticides, which don’t distinguish between so-called pest species and pollinators despite claims that it ‘targets’ pests, are also still widely used in North America, especially on corn and soy. The US Environmental Protection Agency banned 12 neonic ‘products’ in 2019, but not all neonicotinoids, and while chemical industry lobbyists do all they can to muddy the waters it’s clear that populations of insects are in freefall wherever neonicotinoids are used. In fact, neonictionoids are 10,000 times more lethal by weight than the banned insecticide DDT, and the rate of extinction amongst insects is now eight times faster than that of mammals, birds and reptiles.

As if Monarchs (on both side of the Rocky Mountains) weren’t already experiencing enormous pressure. they may also be impacted by climate change. Monarchs are highly sensitive to weather and climate, as they depend on environmental cues (temperature in particular) to trigger reproduction, migration, and hibernation. Climate change may also undermine the predictability of flowering seasons (egg-laying is tied to the availability of plants of course), and Monarchs may be impacted by the effects of an increasing frequency of extreme weather events such as drought and severe storms.

What can be done?

Is it too late to reverse the decline of the western Monarch? The extinction of once-abundant species is hardly unknown in North America, as the desperately sad story of the Passenger Pigeon proves, and as the Center for Biological Diversity pithily puts it, “Complacency and false-positive assumptions about the resiliency of once-common species can have tragic consequences when timely action is not undertaken to safeguard their populations“.

It doesn’t help that lobbyists routinely deny their products cause problems (and cover-up test results which show that they do), or that people demand new homes in sensitive areas extremely important for wildlife, but scientists and campaigners are of course doing what they can. They suggest that priorities for Monarch conservation should include restoring and increasing the extent of habitat with appropriate milkweed species and nectar sources (they say that the public at large can contribute to this effort by planting backyard habitat, especially native milkweeds that are so critical to Monarchs). Increased monitoring of populations is also important, and citizen science efforts like counts and surveys can contribute to this. It is also essential to maintain and restore overwinter habitat, reduce the use of herbicides and pesticides, and address issues related to land-use change (can we manage without that coastal view if it means the survival of an iconic butterfly species?).

The Xerces Society (which provides much of the information on this page) are leading the way in protecting the western Monarch in particular.

In their ‘call to action’ they say that:

The Monarchs’ decline is a story of widespread environmental change. In a recent article we wrote about ‘sentinel species‘ that warn us that we are making the planet unfit and unhealthy. We believe that wildlife has an intrinsic value outside of some sort of ‘value’ to humans, but the disappearance of this familiar butterfly, along with the decline of so many other butterflies and bees, needs to be understood as threatening the wellbeing of people as well, because the food security of humans is dependent on the ecological services that pollinators provide. 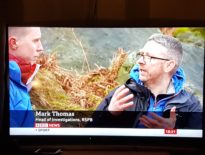 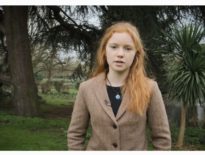