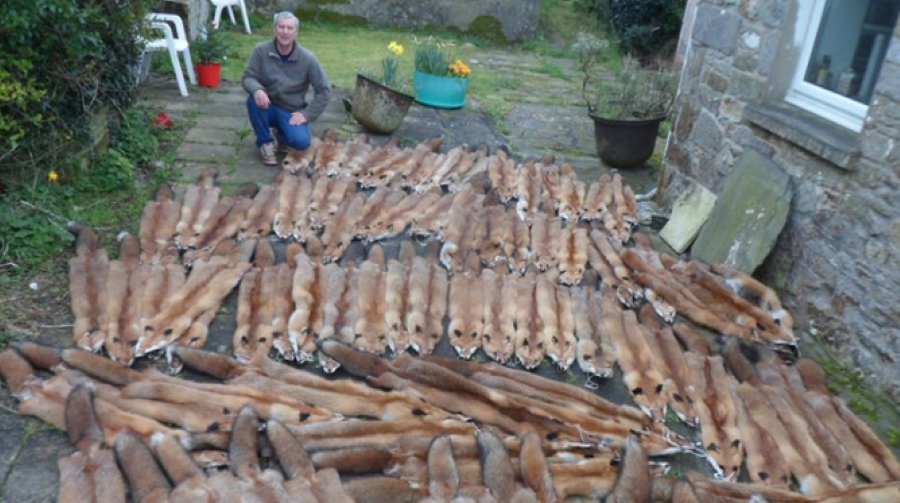 The remarkable Hunt Investigation Team (HIT) – a highly skilled, specialist team with years of experience fighting animal abuse – have just posted details of their latest investigation: an expose of huge numbers of foxes being trapped and killed for their fur in the Pembrokeshire Coast National Park by the UK’s self-styled ‘last fur trapper’ David Sneade.

Acting upon reports of wildlife crime and cruelty, the Hunt Investigation Team discovered Sneade operating out of a small village in south-west Wales. He has apparently spent decades targeting wildlife populations around his home in Maes Morfa, Newport (which sits within the Pembrokeshire Coast NP, and is abundant with wildlife, woodlands and nature reserves). During the winter Sneade traps foxes for their pelts, setting snares along hedgerows, on country lanes and on the boundaries of the South & West Wales Wildlife Trust’s nature reserve at Pengelli. He exports the fur to buyers in Sweden after stripping the skin from the animals in a ‘workshop’.

The fur trade and animal welfare

As HIT says on their website, the fur trade is strongly condemned by the majority of the UK population, who utterly reject such cruel and unnecessary suffering (recent polls by the Fur-free Alliance suggest that in the UK ‘74% think that using animals for the production of fur for the fashion industry is wrong‘). 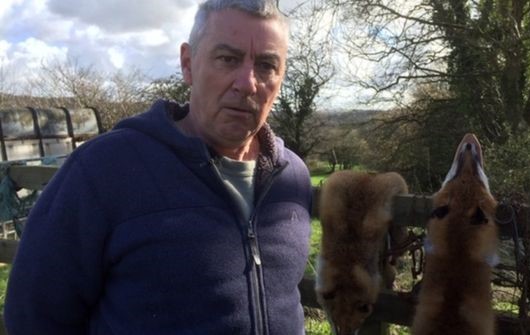 Sneade’s trapping and killing methods are particularly unpleasant. After strangling foxes in his snares, HIT discovered that (irony alert) he avoids ‘damaging’ the pelts by smashing snared foxes with a pole then squashes their internal organs with his foot.

Sneade himself is unrepentant, telling the BBC that he was “helping the environment by keeping the fox population down“. What qualifications he has in ecology (or even in the biology of foxes) to back that statement up is unknown, but given that he says that “I’m a trapper, I was born a trapper and it’s in my blood. I’ll keep on doing this until I’m in a box,” they’re unlikely to be extensive (or even existent). Like so many people exploiting the countryside and its wildlife, Sneade seems to believe that foxes are ‘vermin’ and adds that ‘some suffering when any animal is killed‘ is not problematic: hey, they’re just foxes, right…(not in our opinion, of course, but it’s a surprisingly widespread viewpoint).

The law and this case

Will Sneade be convicted of any offence after HIT’s investigation? While HIT concede that “few people would even suspect that fur trapping is still permitted in the UK

– there is no specific law against it at present”, he does appears to have ignored other wildlife protection legislation, “using snares which are often unlawful and without landowners’ permission”.

In fact, his “trade” is entirely unregulated with no oversight. He operates on public country lanes in the national park, “exposing residents and visitors to scenes of horrific animal cruelty. Wildlife should be safe in the UK’s national parks – not snared, bludgeoned and crushed for fur.“

One possible avenue of prosecution is that Sneade’s garden is littered with the bones of his victims and his ‘workshop’, according to HIT, is not registered with APHA, the government’s Animal and Plant Health Agency (which works to “to safeguard animal and plant health for the benefit of people, the environment and the economy”) meaning it is most likely in breach of legislation around animal byproducts. We’ll have to wait and see how seriously APHA takes butchering foxes and dumping bits of them across the Welsh countryside…

This horrible story covers so much of what we want to help tackle on this site: exploitation of native wildlife; the mindset that sees native predators as ‘vermin‘ (an essentially meaningless term used to justify cruelty); the problems with so-called ‘legal’ snares (used extensively by the shooting industry amongst others); and meaningless or weak legislation (it is illegal to trap wildlife – except if they’re foxes, rabbits and mink which can be caught without record-keeping, specific licencing, or enforceable welfare considerations).

What does it say about us as a ‘nation of animal lovers’ if we still wear fur (wouldn’t it be something if fur-wearing ‘celebrities’ came out against this barabaric practice on the back of this and other investigations?) and legally allow the use of wire nooses to kill animals on behalf of agriculture and the shooting industry (who, it should be noted, actually keep fox numbers artificially high by ‘feeding’ them millions of non-native pheasants and partridges every year anyway). Snares have been banned across most of Europe because they’re considered to be cruel and inhumane, but here in the UK we rely on unqualified ‘countryfolk’ like David Sneade to ensure the captured animal’s welfare – and that approach clearly doesn’t work.

HIT has worked incredibly hard to expose this horrendous story. Investigations of animal abuse and animal suffering are inevitably distressing, but as a spokesperson for the team told the WoW Project this morning, “Operations like this are exhausting but the whole team will always do everything we can to bring appalling treatment of animals like this to the public’s attention. We are as determined as ever to expose the truth behind fox hunting, trapping and snaring, badger persecution and cruel sports.”

The Team are largely self-funded, but do have a Go Fund Me page set up where we can donate to support their work. They are an incredibly motivated group of people who deserve huge credit for what they do – and any small amount we can spare to support them will be gratefully received!

Fur Trapping in a UK Nati… 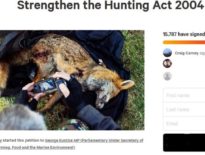 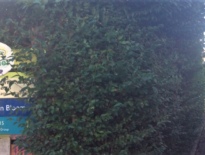