So, the country is in lockdown because of a respiratory virus. Huge numbers of us are worried about our jobs, our safety – our lives. Our public services are stretched to the limit. The heroes of the NHS are working until they collapse. We’re in an unprecedented period where we’re all being asked to pull together for the good of the nation, when there is a new focus on discovering solace in nature, when we’re engaged in a real debate about our environment, climate change, and how we treat wildlife. So what do those ‘essential keyworkers’ who strive to raise unnaturally high numbers of Red Grouse for the gun do? The heroes of the stoat trap, the professionals behind the ‘disappearing raptor’ trick, the wielders of the blunt stick and the wire noose, what do they do? They set fire to Meltham Moor, which is ‘managed’ for grouse shooting by the Meltham Shooting Club, lose control of their ‘controlled burn’, and drag the fire rescue service away from saving lives into a massive effort to ‘save the gamekeeper’s face’.

Clearly not content with massacring our wildlife with traps and snares, unsated with slaughtering unknown numbers of native predators, these hired hands of an industry that thinks only about blood and profit, torched acres of habitat that was just seeing the first signs of spring, emerging reptiles and budding plants – and then let their fire burn through onto a neighbouring National Trust reserve causing damage which will cost thousands to repair.

Genuine conservation organisations have listened to and conferred with these ‘professionals’ for decades. Yet year after year after year, just as life is starting to take a foothold on the monocultures that pass as grouse moors, out come the matches and up goes the smoke. Come rain (make that flood), come shine, come strong wind or gentle breeze, the ‘mercenaries of the moors’ can be depended upon to smash (and burn) the moorland into submission.

Of course, this destruction, as the fire service says, could ‘easily have been avoided‘ but that would have required something rather special by the perenially ‘hard of thinking’: an environmental and public-spirited awareness that these dead-bird gatherers have never previously shown. This is not a profession in tune with public concerns. In fact, it’s difficult to believe that they have any concern for the public – or public services – at all.

And it looks like – finally – the message is getting through that these people are in it – in everything – only for themselves. Even the mainstream media has twigged that setting fires when the country is trying to douse the conflagration racing though it is just plain wrong. Especially when they’re doing it just so that the shooters now sitting scowling at home will have something to kill later in the summer.

Of course, some campaigners and grassroots organisations are all too aware of the reality of burning and the annihilation of our wildlife.

A spokesperson for Moorland Monitors, for example, a grassroots organisation that works with the public to record and report burning, compiling evidence of this utterly needless damage to wildlife and habitat, told us today that, “Moorland burning has so many negative effects. It destroys the precious plant species found in our upland peat bogs, destroying protected habitat in minutes. It releases carbon dioxide into the atmosphere during a time of climate crisis. It incinerates moorland wildlife, including adders, toads and even badger cubs. It pollutes the air of local communities. We pass our evidence onto organisations such as the RSPB and local councils, in order to contribute to wider legislative change.”

Interestingly BBYM also pointed out that fire breaks cut through areas of wet peatland – which shooting estates routinely dry out – stopped the flames, but there were too few wet areas left to have much of an impact.

Every year precious wildlife is wiped out to raise Red Grouse for the gun. Every year estates burn precious moorland and damage globally important blanket bog. And every year ‘controlled’ fires burn where they shouldn’t. For that to happen this year – during a national emergency – is unforgivable. Lobbyists for the shooting industry have spent years spinning the blood-spattered image of gamekeepers to make us believe they’re ‘conservationists’. As Ricky Tomlinson’s Jim Royle might say, ‘Conservationists my arse‘. In fact, as Jim might go on to say, ‘Bloody arse-onists more like….” 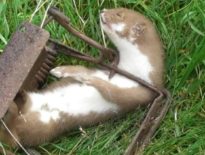