Raptor Persecution UK (RPUK), the globally important blog covering crimes against birds of prey (and which reached a staggering six million views just last week), has fully covered the disappearance “in suspicious circumstances” [legalese code for ‘almost certainly killed but no firm proof at the moment’] of yet another two Hen Harriers on grouse moors in the Cairngorms National Park – this time two (of three) young birds satellite-tagged by Wildland, which RPUK describes as “a collection of estates in the Cairngorms and Sutherland, bought by the Polvsen family and being managed with an impressive vision for conservation“. Danish billionaires, the Polvsens are now Scotland’s largest private landowners and have pledged to “restore the Highlands for generations to come“.

Wildland, which is based in Aviemore, have an impressively expensive-looking website with an accompanying blog, and they have written with pride about their Hen Harriers. Unfortunately (as RPUK discusses) Wildland have had to report that, “In 2019 WildLand’s conservation team fitted three GSM tags to hen harrier chicks within our landholding. Tragically, all three of these hen harriers have now stopped transmitting“. (One of the birds was found dead in a field in Aberdeenshire but the cause of death has not been released yet, hence the focus on the two missing birds.)

Hen Harriers are perhaps the UK’s most persecuted bird of prey. While they mostly feed on small birds and mammals like Meadow Pipits and voles, Hen Harriers do take Red Grouse chicks, meaning that – despite the highest legal protection – they are relentlessly persecuted in what estate owners view as ‘conflict’ – in reality a straightforward decision to break the law to protect shooting profits. In a recent post we quoted a study that said that 72% of tagged Hen Harriers were confirmed or considered likely to have been illegally killed, and this was ten times more likely to occur over areas of land managed for grouse shooting relative to other land uses.

It would appear that even when grouse moor estates like Wildland satellite-tag young raptors in good faith, there are others in the shooting industry who are unwilling to host any of the dwindling handful of harriers surviving in what is laughingly called a ‘national park’.

Even more telling is the remarkable list that RPUK has complied which shows with absolute clarity the scale of the illegal killing of Hen Harriers throughout the UK. It’s a list that we should maybe print off and carry around, a list that lobbyist organisations like the Moorland Association should be required to read before writing another puff-piece on how hard they’re working to root out upland wildlife criminals.

It is utterly damning and we hope RPUK won’t mind if we quote it in full below (we’ve highlighted every reference to a grouse moor):

Nevertheless, now the news is out we can add these two Wildland hen harriers to the ever-expanding list of hen harriers (at least 33 now) believed to have been illegally killed since 2018, the year when grouse shooting industry reps would have us believe that hen harriers were welcomed back on the grouse moors:

18 April 2018: Hen harrier Lia ‘disappeared’ in Wales and her corpse was retrieved in a field in May 2018. Cause of death was unconfirmed but police treating death as suspicious (here)

2 October 2018: Hen harrier Mabel ‘disappeared’ on a grouse moor on the edge of the Yorkshire Dales National Park (here)

10 November 2018: Hen harrier Rannoch ‘disappeared’ on a grouse moor in Scotland (here). Her corpse was found nearby in May 2019 – she’d been killed in an illegally-set spring trap (here).

14 November 2018: Hen harrier River ‘disappeared’ on a grouse moor in the Nidderdale AONB (here). Her corpse was found nearby in April 2019 – she’d been illegally shot (here).

11 May 2019: A male hen harrier was caught in an illegally-set trap next to his nest on a grouse moor in South Lanarkshire. He didn’t survive (here)

7 June 2019: A hen harrier was found dead on a grouse moor in Scotland. A post mortem stated the bird had died as a result of ‘penetrating trauma’ injuries and that this bird had previously been shot (here)

24 September 2019: Wildland Hen Harrier 2 ‘disappeared’ on a grouse moor at Invercauld in the Cairngorms National Park (this post)

18 October 2019: Member of the public reports the witnessed shooting of a male hen harrier on White Syke Hill in North Yorkshire (here)

January 2020: Members of the public report the witnessed shooting of a male hen harrier on Threshfield Moor in the Yorkshire Dales National Park (here)

There are two more satellite-tagged hen harriers (Tony & Rain) that are reported either confirmed or suspected to have been illegally killed in the RSPB’s Hen Harrier LIFE Project Report but no further details are available.

And then there were last year’s brood meddled hen harrier chicks that have been reported ‘missing’ but as they’re carrying a new type of tag known to be unreliable it’s not known if they’ve been illegally killed or if they’re still ok. For the purposes of this mini-analysis we will discount these birds.

So that makes a total of at least 33 hen harriers that are known to have either ‘disappeared’ in suspicious circumstances or have been witnessed being shot or have been found illegally killed in the last two years. And still we’re expected to believe that everything’s perfect, that the grouse shooting industry is not riddled with armed criminals and that hen harriers are doing just fine, thriving even, according to the shooting industry’s propaganda.

One thought on “Dead Hen Harriers | 33 and counting” 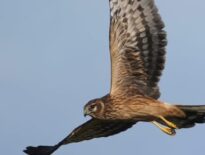