Guest post by Emily and Rose Jones, with additional material and links by The War on Wildlife Project:

2020 has been dubbed ‘Year Of The Gamekeeper’ by the British Association for Shooting and Conservation (BASC), who say ‘The aim of the campaign is to raise awareness of gamekeepers; what they do, how they support UK agriculture and the role they play in conservation’.

With gamekeepers classing themselves as ‘essential workers’ through the lockdown, and stories of illegal persecution of protected species hitting the news recently, we thought it was a fitting time to ‘raise awareness’ ourselves of what gamekeepers actually do and explain that mostly what they are paid to do is kill wildlife so that shooters can kill other wildlife.

The job of a gamekeeper, on a bird shooting estate, is to manage lethal predator control and keep the ‘game’ bird population up, to maximise the profits gained from shooting parties (as a Times newspaper sub heading put it, “Gamekeepers say their livelihoods depend on there being enough birds to shoot“). This means doing the dirty work of shooting, trapping and snaring animals which might eat grouse, pheasants, or their eggs. Foxes, crows, magpies, stoats, and weasels are killed relentlessly, using a selection of traps, cages, lures and snares. 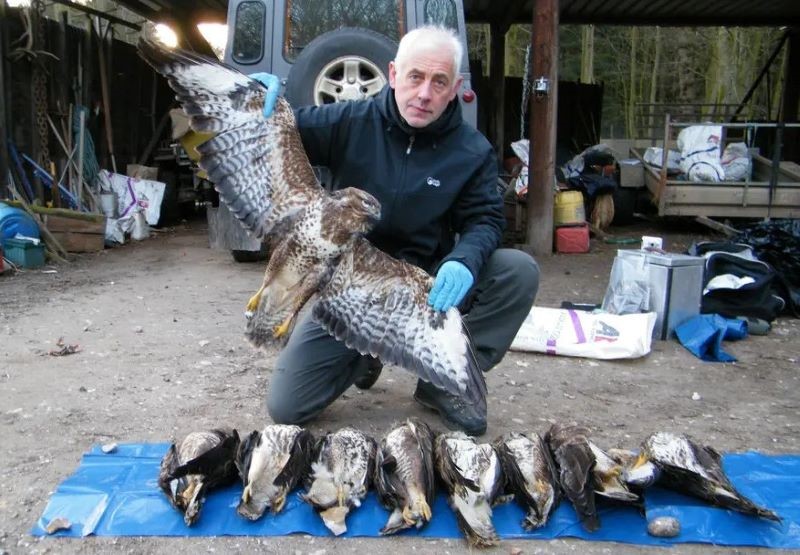 All birds of prey are legally protected. This has, however, not stopped some gamekeepers illegally persecuting them. There are numerous examples online, but the well-known photo above is of an RSPB investigator with nine poisoned buzzards from of a total of 11 birds killed on Norfolk’s Stody shooting estate by former gamekeeper Allen Lambert in 2014. The notorious Scots gamekeeper Alan Wilson (below), who kept a ‘kill list’ and dumped ‘1000 animals into a stink pit’, was convicted in 2019 of illegally killing dozens of animals – including shooting two goshawks, four buzzards, and a peregrine falcon – between March 2016 and May 2017 on Longformacus Estate in the Scottish Borders. An interesting study from Edinburgh University looked into why gamekeepers may illegally kill protected animals and found that peer pressure was a big factor, explaining ‘gamekeepers fear colleagues may take the mickey’. 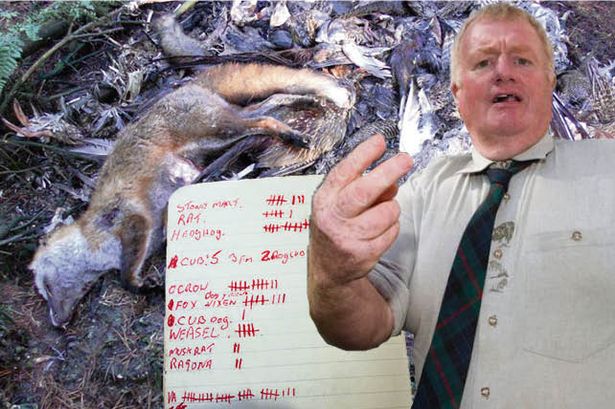 This year there have been many accounts of protected species being targeted during lockdown, while there were fewer people keeping an eye out and the police were preoccupied. The Guardian reported the increase, saying ‘Police have been called out to investigate multiple cases of raptors being shot, trapped or suspected of having been poisoned’. Among other accounts the Moscar Estate, in Derbyshire was found to be targeting badgers, as seen in the Hunt Investigation Team’s video of a badger which was found in a snare and released.

The evidence is mounting that the idea of gamekeepers as ‘custodians of the countryside’, who play a key role in conservation, is a façade, their crimes wished away with talk of ‘a few bad apples’. Let’s not forget we are talking here about a qualified profession, taught in college, which is built around killing wildlife, so that other wildlife, or introduced species in the case of pheasants (some 40 million+ are released every year), can be reared then shot for ‘sport’.

Add to this the damaging practice overseen by gamekeepers of heather burning on grouse moors which releases vast amounts of carbon (accumulated in the peat over thousands of years) into the atmosphere. Burning also increases flooding in the lowlands: ‘mismanagement’ of the moorlands has been blamed for the flooding in and around Todmorden in recent years, with members of the group Treesponsibility, aiming to plant 10,000 trees to combat flooding, and even going on hunger strike earlier this year outside Natural England’s offices to highlight the issues caused by grouse-moor land-management.

Shooting estates are the gamekeepers employers. They are also some of the most wealthy land owners in the UK. In his acclaimed book ‘Who Owns England?‘, Guy Shrubsole found that ‘Half of this country is owned by less than 1 per cent of the population’, and that grouse moor estates cover 550,000 acres, an area the size of Greater London. He concluded that ‘half of England’s grouse moor estates turn out to be owned by the aristocracy and gentry, whilst the other half are owned by wealthy businessmen and women, City bankers, hedge fund managers, and Saudi princes’. (The website Who Owns England managed by Guy and updated regularly is a revelation!)

Shooting parties can pay thousands for a weekend shooting pheasants or grouse, sometimes being flown in by helicopter. Gamekeepers are seen as ‘necessary’ to this industry, but not historically a respected part of it. Bob and Brian Tovey, in their book ‘The Last English Poachers‘, described gamekeepers as ‘brutal lackeys’ who, ‘beat and killed ordinary folk who tried to feed their families by poaching bird or beast.’ Those who pay to shoot are unlikely to be made aware of (or would want to know) what goes on behind the scenes to maximise their targets and give them an easy day’s shooting (which includes the not very conservation-minded killing of protected Hen Harriers, two more of which have just ‘disappeared’ over a grouse moor in the so-called Cairngorms National Park as depicted in the cartoon below by David ‘Mr Carbo’ Mitchell). 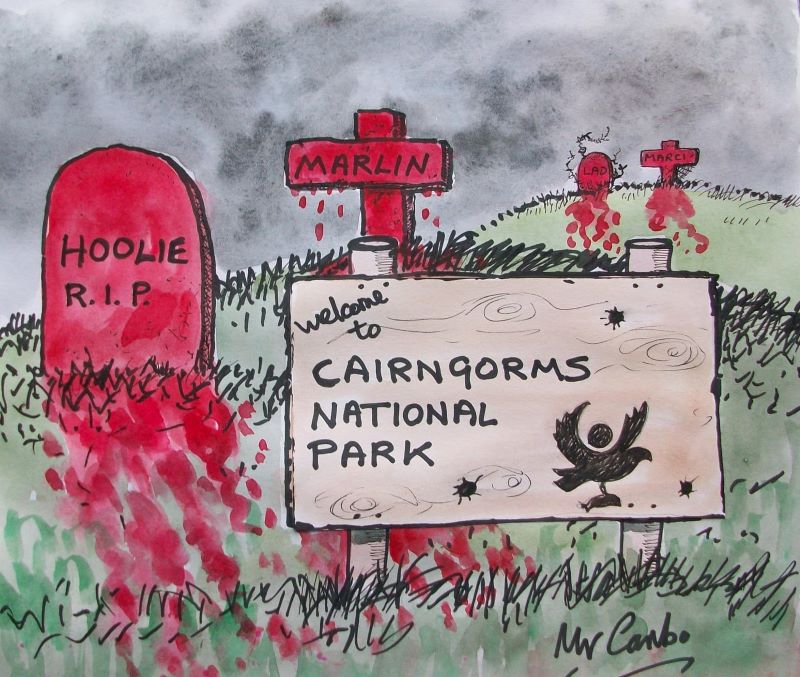 All this means that it seems to us an odd idea to run a ‘Year Of The…’ initiative, attempting to fundraise £220,000 to support ‘gamekeepers, stalkers, ghillies and their families in times of hardship, ill-health and retirement’. You would have thought wealthy shooting estates would be able to afford to pay people properly for doing their dirty work but this is traditionally a low-paid occupation where gamekeepers are often dependent on shooters giving them handouts via ‘tips’. Employers are legally required to provide a pension scheme to their employees – but ironically don’t need to if wages fall below some very low thresholds.

We think this initiative is more about trying to change the public image of a profession which, despite its claims of ‘conservation’ more and more people think of in terms of wildlife crime, persecution, and an obsession with ‘control’. With groups like Moorland Monitors, and OneKind putting more information into the public domain, shooting estates can no longer successfully hide the work of their gamekeepers (‘work’ like creating the mound of slaughtered Mountain Hares captured in the photo below by Pete Walkden in 2017), so instead are trying to polish it up and call it ‘countryside management’. 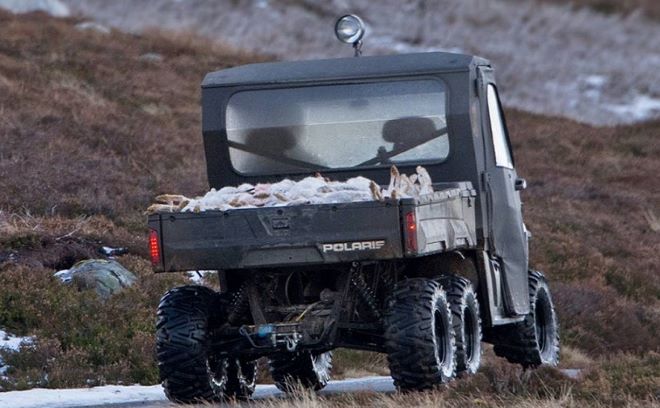 Their idea to profile ‘a UK gamekeeper and their story’ each month, with a little set of questions like, ‘Do you have a memorable moment as a keeper?’ or ‘Did anyone inspire you?’ smacks more of a desperate attempt to humanise this horrible job, mimicking a technique usually used for showcasing some unsung hero. In contrast, the World Health Organisation has dubbed 2020 ‘Year Of The Nurse and the Midwife’, a much more fitting campaign.

Despite BASC’s efforts the ‘Year Of The Gamekeeper’ doesn’t seem to be going to plan anyway. Shooting estates have not had it easy with Covid-19 bringing the season’s shooting into question. There has been bad press and legal attention, some of the General Licences much beloved by gamekeepers have been found to be unlawful, the national papers and Channel 4 have covered raptor persecution, the Scottish parliament has just given protection to Mountain Hares (much to the horror of the Scottish Gamekeepers Association), and to top it all off, six months into the campaign their JustGiving fundraiser, with a self-set target of £220,000, is showing just 1% raised from 7 supporters (information accurate as of 29 June 2020). The wealthy shooting industry has shown itself to be tenacious and unwilling to be bound by the law or impacted by public outcry: it also seems unwilling to put its hands into its own pockets to support its employees. Gamekeeping may be losing favour as an employment prospect anyway as an announcement was made in May this year that Askham Bryan College plans to close its gamekeeping campus at Newton Rigg in Cumbria after an independent review found the site is not financially viable (incidentally Newton Rigg is the only college in the country with its own grouse moor).

While it may be that gamekeeping is becoming an unpopular profession, it is not finished yet. We must observe, monitor and report any illegal behaviour from gamekeepers. If we don’t everything we’ve written about above – from persecution to wildlife crimes and more – will just continue to take place. 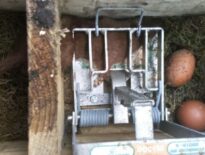 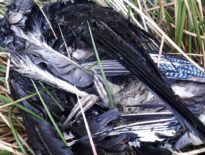