Appleton-le-Moors. Where might that be then? Here’s a clue: it’s in a part of the country that is regularly called out as the worst place in Britain for a specific crime. Some urban ‘sink’ much-derided by right-wing journalists as a car theft hot-spot? A deprived and unloved part of the UK where gangs of feral youths patrol the streets mugging pensioners as they wobble back from the post office with their life-savings in a paper bag? Of course not: it’s a village and civil parish in the Ryedale district of North Yorkshire, which, according to the 2001 census, had a population of 183, reducing to 164 in the 2011 census.

Sounds like one of those nice, quiet, safe places, doesn’t it. What sort of crime could possibly blight such a beautiful part of the world? The answer lies in the fact that the so-called ‘National Park’ is actually largely owned by grouse shooting estates, and grouse shooting estates are underpinned by the illegal destruction of birds of prey. And of buzzards are birds of prey…Yes, North Yorkshire is not the place to go if you’re a raptor (unless you have some sort of death wish anyway).

WARNING: Some of the below images may be distressing.

North Yorkshire Police is appealing for information after a female buzzard was discovered shot near Appleton le Moors on Sunday 5 July. The bird was found suffering multiple injuries in woods just off Hamley Lane, Appleton le Moors by a member of the public.

Although the buzzard received immediate veterinary treatment, she sadly did not survive given the seriousness of her injuries. A post mortem examination revealed she had suffered shot damage to her tail and wing feathers but also had leg and head wounds which may have been caused by becoming stuck in a cage trap.

Prior to her death, the female buzzard had been seen feeding two juveniles in the area and it is believed she was shot at some point between 6 – 9pm on Saturday 4 July 2020.

“This is the latest in a very long line of raptor persecution incidents that have occurred in Ryedale over the last few months and it is completely unacceptable. Killing or injuring a bird of prey is not only illegal but cruel and callous.

“We are doing everything we can to track down these offenders and I would urge anyone who can help with information about this incident or any other wildlife crime, to get in touch as soon as possible.”

Find out more about bird of prey persecution and how you can Recognise, Record and Report it.

When the police are saying that “This is the latest in a very long line of raptor persecution incidents that have occurred in Ryedale over the last few months” even the lobbyist groups propping up the mass laughter of grouse for a ‘day out’ have to know that unless the industry smartens up it’s in real danger. It would still have a tough job to persuade an increasingly aware public that blasting wild birds out of the sky for a giggle should continue, of course, but how much of the pressure would come off them if they just stopped killing Buzzards (and Hen harriers, Peregrines, Goshawks, Short-eared Owls)? For some people that might just be enough.

It seems unlikely raptor persecution will ever end though. Lockdown saw a surge in recorded wildlife crimes, as gamekeepers took advantage of the empty moors to really get down to some serious raptor persecution. Is that fair? Back in mid-May, Mark Thomas, the excellent RSPB Head of Investigations UK was quoted saying, “Since lockdown began, the RSPB has been overrun with reports of birds of prey being targeted. It is clear that criminals on some sporting estates both in the uplands and lowlands, have used the wider closure of the countryside as an opportunity to ramp up their efforts to kill birds of prey…Spring is the time when birds of prey are most visible and therefore vulnerable, as they put on courtship displays, build nests and find food ready to breed. It is clear the criminal actions are targeted and malicious in nature, taking out birds before they have the opportunity to breed, often in areas where they have previously faced persecution.”

But, you can almost hear the lobbyists smirk as they think that they’re making a REALLY GOOD POINT, the RSPB would say that wouldn’t they? Yawn. No, the RSPB would much prefer to work with shooting estates than spend resources endlessly tracking down the criminals associated with it. The police concur anyway. Inspector Matt Hagen commented on the extent of raptor persecution in North Yorkshire in a discussion with renowned reporter Alex Thomson during a recent Channel 4 News special, and didn’t hold back:

Matt Hagen: “All the shooting investigations that we’ve got going on at the moment are involving gamekeepers on grouse moors“.

Alex Thomson: All of them?

Matt Hagen: All of them.

Alex Thomson: Every single one?

While this dead buzzard wasn’t actually found on a grouse moor, it wasn’t far from one – and which industry or group would benefit from deliberately killing medium-sized raptors that “principally eat small rodents“, which are carrion-eaters, but which do take a tiny number of chicks? Not hard to work that out is it….

As always, if you have any information that could help North Yorkshire Police please call 101 or if you prefer to speak anonymously call Crimestoppers on 0800 555 111.

Buzzard found shot near A… 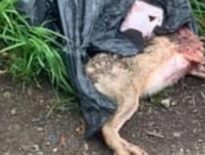 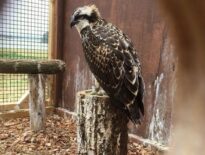