Guest post by ‘Bara Brith’, who has asked to remain anonymous because of their time spent walking grouse moors

“My love of upland moors soured when I moved to a part of the country where they seem to be used for driven grouse shoots. I used to pop up on moors looking for black grouse, stonechat, pipits, cuckoo, great grey shrike, raptors and corvids etc, and mammals like fox, weasel, stoat, hare etc.

It became apparent very quickly that something was wrong, very wrong. The contrast between what I was used to seeing and what I was seeing now was unbelievable. These moors were empty except for pipits, curlew, lapwing – oh, and red grouse. I was shocked to see and read on bird sites about the driven grouse moors, but I’d always thought it was because of the hen harriers, which I used to see on a moor in the summer and on the estuary in the winter. I have lived here for two years. I have never seen one on prime hen harrier habitat. I spend so much time on the moors I have never seen any mammals except for rabbits and the odd hare. It’s a crying shame.

I gave up looking for birds and started looking at the cause. The moors I go on are owned by Yorkshire Water. They must know what is devastating the wildlife on their property. It is so obvious that British wildlife is being slaughtered on their water catchment areas.

While out I noticed streams near shooting butts had logs across them with Fenn traps in the middle. They were banned in the spring of 2020 for trapping stoats. Today, July 2020, I found four. As with most people I can’t afford to go to court for criminal damage so I set them off, record with grid reference, os maps, and pictures. As I reached to trip one Fenn trap a common lizard ran across the log. I froze, we both stared at each other. When I noticed the trap had already been sprung, I could breathe and move: the lizard bolted into the undergrowth and my heart slowed back to normal.

Old Fenn traps are replaced with boxed stainless steel killers. The ones on poles over streams have perspex as a trigger. The first one I set off made such a noise I nearly fell in the brook.

Each gamekeeper has their own way of hiding their traps, and using markers from stones, sticks etc to using memory maps.

If I can’t birdwatch I keeper watch. You can sit the other side of a valley and find out where they hide their killing boxes. Like most people they are lazy. Traps are always near quad tracks. Unless they are breaking the law, then they may be hidden behind “PRIVATE KEEP OUT’ signs.

I’m finding so many now I pass on the information to someone I trust who sends it on to groups he knows. As I’m writing this one of my pictures of A FENN MARK 4 trap is on Twitter.

It’s getting closer to August 12th the keepers are getting busy, shooting butts are repaired and painted, and they are out all the time.

I know a lone birder won’t make much of a difference, but if we join wildlife / moorland groups and put pressure on from all sides we will make a difference. As I finish I just ask, go out on non-shooting moors and record what you see – then go on a Grouse Moor and compare for yourself what’s there…”

Please note that you may risk a charge of criminal damage if you are found interfering with what is currently considered to be a ‘legally-set’ trap.

The suggestion to join a local monitoring group is one we fully endorse: no prior expertise is needed (training in identifying traps and how to report them properly will be given), and monitoring is non-confrontational. Birdwatchers that visit moorland locations can be especially important as they typically have the knowledge to identify – or note the absence of – birds of prey etc. 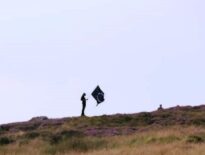 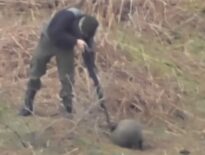