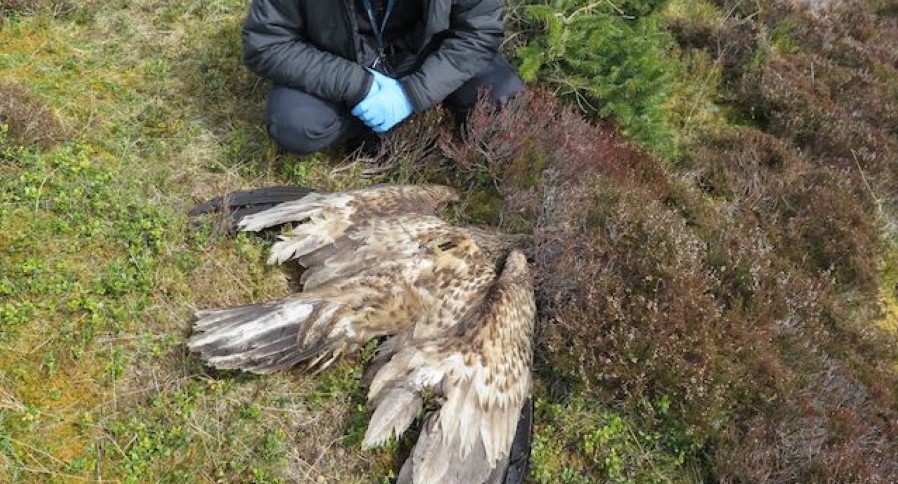 Grouse moors and wildlife crime. As the song says, they go together like a horse and carriage, you can’t have one without the other. Estates simply can’t help themselves. Perhaps though, this time, they’ve gone too far. It really shouldn’t matter whether they illegally kill a Buzzard, a Goshawk, a Hen Harrier, or a White-tailed Eagle of course – all are protected, all are important – but the White-tailed Eagle is different to many other birds of prey in one important way: it is a key component of Scotland’s eco-tourism economy. It has value.

Visitors have poured millions of pounds into the economies of islands like Mull on trips to see White-tailed Eagles since they were re-introduced to Scotland almost fifty years ago. An RSPB report estimated that the sea eagles on the Isle of Skye were generating £2.4 million even five years ago. They are an established element of what brings people to the country.

That alone makes White-tailed Eagles newsworthy. And this one was satellite-tagged (which has captured the imagination of journalists), was poisoned on a grouse moor (the tide is demonstrably turning against the impacts of grouse moors), and seems to have been part of a gamekeeping killing spree that took place during lockdown (which has really infuriated a public almost all of whom sacrificed several months of their lives for the good of everyone else).

The Raptor Persecution UK blog is asking if this will be the ‘tipping point‘? That “the Scottish Government simply cannot ignore this blatant criminality any longer“. Excuse the cynicism, but if it is a tipping point, it won’t be because White-tailed Eagles are fantastic, majestic, powerful, beautiful, iconic…or any other word us wildlife folk might use to describe them, it’ll be because one set of individuals have been breaking the law for decades by killing birds of prey, and this time they’ve killed a bird of prey that is critically important to the livelihoods of other individuals. And during a time of unprecedented economic uncertainty, as the tourist industry is collapsing, that can not be allowed to take place without action from the government to make sure it doesn’t happen again.

That may be an unpalatable way to put things. Of course it would be better if governments across the UK discovered a love for wildlife, an appreciation that ‘nature’ in its broadest sense has an intrinsic right to exist, but if the economic argument is what it takes for the Scottish government to finally protect raptors properly and rein in the ‘untouchables’ of grouse shooting then so be it…we here at The War on Wildlife Project will take that every time rather than see yet more birds of prey wiped out simply because some grouse moor owners refuse to join the rest of us in the 21st century and nobody in authority seems inclined to stop them breaking the law.

The bird of prey was recovered from Donside, Aberdeenshire, in April. A post mortem has now established it died as a result of pesticide poisoning. It had been satellite tagged.

The death is being treated as suspicious. An investigation is ongoing and Police Scotland is appealing for information to help identify those responsible.

White-tailed sea eagles were re-introduced into Scotland in the 1970s after becoming extinct in the UK in the early 1900s. There are now over 150 breeding pairs in Scotland.

Police Inspector Sheila McDerment, who chairs the North East Partnership Against Wildlife Crime, said: “As well as being illegal, poisoning is a cruel way to kill a bird. It also puts the lives of other creatures and plants at risk and impacts negatively on our environment.

“This incident is particularly upsetting because these rare and beautiful birds had been re-introduced to Scotland after being extinct throughout the UK.

“Raptor persecution is one of six priorities set by the UK National Wildlife Crime Unit. In the North East we work closely with a number of partners to tackle wildlife crime. Members of the public are our eyes and ears. I appeal to anyone out there who may hold any information about this incident to help us bring the offender to justice by coming forward and telling us what they know.”

Ian Thomson, RSPB Scotland’s Head of Investigations said: “The news that this bird has been illegally poisoned is appalling. This crime would never have come to light had the bird not been fitted with a satellite tag, and the killing of this young eagle can be added to a litany of raptor persecution incidents in recent years, including previous poisonings and multiple disappearances of similarly-tagged birds of prey. Poisoning is vicious and indiscriminate and we join with Police Scotland in appealing for information.”

Detective Chief Superintendent Gary Cunningham, Wildlife Crime lead for Police Scotland, said: “Scotland’s rich, rare and diverse wildlife and landscapes are among its biggest attractions. We cannot allow the indiscriminate use of poisons and pesticides to threaten our natural heritage. Police Scotland, working with our key partners, is committed to protecting our wildlife habitats and to bringing those who seek to destroy or harm it, to justice.”

Please contact Police Scotland on 101 if you have information about this crime, quoting crime reference number CF0160960720. You can also report information anonymously by contacting Crimestoppers on 0800 555 111. 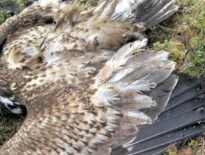 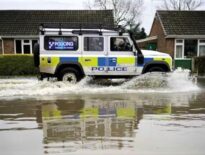