Police Scotland yesterday confirmed that an immature, satellite-tagged White-tailed Eagle found dead on a grouse moor inside the Cairngorms National park earlier this year had been poisoned.

Wild Justice are asking all of us to communicate our anger, frustration, and disappointment to leading Scottish Government Ministers as soon as possible.

This is the body of a young White-tailed Eagle found in the Cairngorms National Park, Scotland. It was poisoned.

The dead bird was found because it was satellite-tagged and the scientists following its behaviour knew that something was amiss and discovered the body.

Although the details of this death aren’t fully known it comes as no surprise to discover that the bird was found in an area of grouse moors in Strathdon. Even though this area is part of the Cairngorms National Park it’s a wildlife crime hotspot.

We’re contacting you this evening to ask you to add your voice to the outcry over the death of this young eagle.

A large number of emails, polite emails, will undoubtedly make a difference. What you say is, of course, up to you but please say something.

You might want to say how seeing the image of this young dead bird, which died a horrible death, made you feel: sad? angry? shocked?

You might want to say what you think the impact will be on how people think of Scotland: saddened? less likely to visit? disappointed? less admiring?

You might want to say what you think should happen: ban driven grouse shooting? license all shooting of wildlife? increase police resources?

We know that thousands of Wild Justice supporters responded to our plea to sign a petition asking Scottish politicians to control the mass culling of Mountain Hares back in mid-June and that had an immediate impact. We’re asking you to support conservationists in Scotland once again by sending an email this evening. Who knows?; your email, added to all the others, maybe what makes a difference this time too.

PS Feel free to pass this email on to others you think will also be incensed by this death.

PPS the horrible image is from Police Scotland who said “As well as being illegal, poisoning is a cruel way to kill a bird. It also puts the lives of other creatures and plants at risk and impacts negatively on our environment. 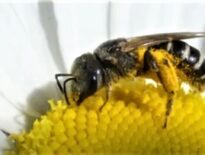 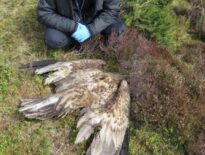