The European Commission has just ordered France to enforce existing legislation banning the use of lime sticks or ‘glue traps’ to catch wild birds. The country has been given until October to definitively outlaw the practice.

Using glue sticks to catch birds has actually been outlawed in Europe since the passing of the 1979 Birds Directive, but since 1989 France has used a derogation which allows trapping in ‘specific circumstances’ where the practice is “controlled, selective and in limited quantities”. This nonsense is based on a Commission decision from 2003 which stated that “A Member State may, under certain conditions, derogate from provisions setting the opening and closing dates for the hunting of wild birds” but also said that “hunting may be authorised only if certain conditions are met, in particular that there is no other satisfactory solution, that the hunting is carried out under strictly supervised conditions and on a selective basis and that it applies only to certain birds in small numbers“.

Under huge pressure from hunting lobby groups, France has used a rolling derogation on ‘glue traps’ in five south-east departments on the grounds that it is “traditional” (a familiar excuse that campaigners will recognise as having been used to justify everything from clubbing seals and hunting Minke whales to chasing foxes and contributing to a near-terminal decline in the European population of Turtle Doves). ‘Traditional’, cruel and indiscriminate, ‘glue traps’ are short twigs or ‘sticks’ coated in ‘glue’ (traditionally made from boiling up the fruit of the Syrian plum-tree, holly bark, or mistletoe), placed in bushes or at roost sites. In some areas birds are either flushed onto them or lured down by ‘callers’ or tapes. No-one outside of the delusional hunting organisations is under any illusions that ‘small numbers’ of birds are killed (in 2019 glue-trappers were given permission to catch a staggering 42,500 song thrushes and blackbirds), or that glue sticks only catch certain ‘allowable’ species as defined by the Birds Directive.

In France, the BirdLife partner LPO (Ligue pour la Protection des Oiseaux), who have campaigned for years for a ban on glue sticks, stone traps, and other ‘traditional’ methods of slaughtering wild birds, produced evidence from hidden cameras to prove that the practice is not selective (ie is non-discriminate) and poses a threat to endangered species. They estimate that 40,000 birds are caught using glue sticks by 5,000 hunters every year.

Under the government derogation hunters are ‘legally’ allowed to trap just five species (largely thrushes), but secretly filmed video shown to the Guardian last year, showed robins, blue tits, warblers and finches struggling and dying on glue-sticks or being pulled off and discarded like litter. Last year, LPO activists found a dead kestrel, its wings gummed with glue. A Guardian article at the time quoted Yves Verilhac, the director of LPO, saying that “We’ve concrete evidence that sometimes the bird is struggling for 20–30 minutes. To remove them from the sticks, they spray them with petrol or acetone, which is toxic, and if it’s not a species they’re allowed to trap they often throw the bird away like a stone.”

In a statement published on their website today LPO also debunk the lie of ‘tradition’. They write that “Like French society itself, today’s hunters have become predominantly urban and less than 5% of them live in the countryside. The trappers that we have been able to observe in the scrubland often arrive behind the wheel of shiny 4x4s… far from the idyllic image of the traditional countryside… Moreover, according to an IFOP survey carried out in July 2020, 77% of people living in rural areas declare themselves in favour of a referendum on animal welfare – one of the proposed measures of which is a ban on glue sticks!”

LPO goes on to say (in an argument very familiar to opponents of fox hunting here in the UK) that, “Rather than trying to irresponsibly pitch city dwellers against rural people, it is high time to comply with the law and respond to the expectations of all French people, in cities and in the countryside, and put an end to traditional hunts“. The organisation also demands species in an unfavourable conservation state (ie 20 out of the 64 species that are ‘huntable’) should be fully protected, and that there should be an end to the hunting of migratory birds in February.

As might be expected hunting lobbyists are stamping their feet, turning to distasteful personal and sexist attacks to defend their ‘hobby’. They are quoted as claiming, for example, that the decision by Barbara Pompili, the newly appointed minister for ecological transition, to enforce European legislation and ban ‘glue traps’ was taken not because the government has finally bowed to the threat of huge fines and incontrovertible evidence of the reality of ‘glue traps’ but because “the new minister is a woman“. You know, rather than an ecologist and a competent government minister first elected to the National Assembly in 2012…

A report last year by the French National Centre for Scientific Research found that the number of birds in France’s rural areas had dropped by a third in 17 years. Lime sticks were made illegal forty years ago. The sound of toys being thrown out of those shiny 4x4s will no doubt be heard for a while, but hopefully France (and countries all over Europe and Great Britain) will finally recognise that a handful of idiots should not be allowed to use ‘tradition’ as an argument for indulging in a practice that is cruel, unsustainable, and which belonged to the middle ages. 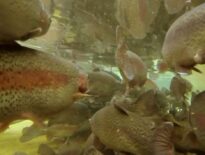 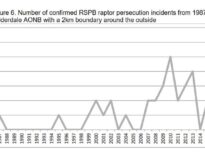