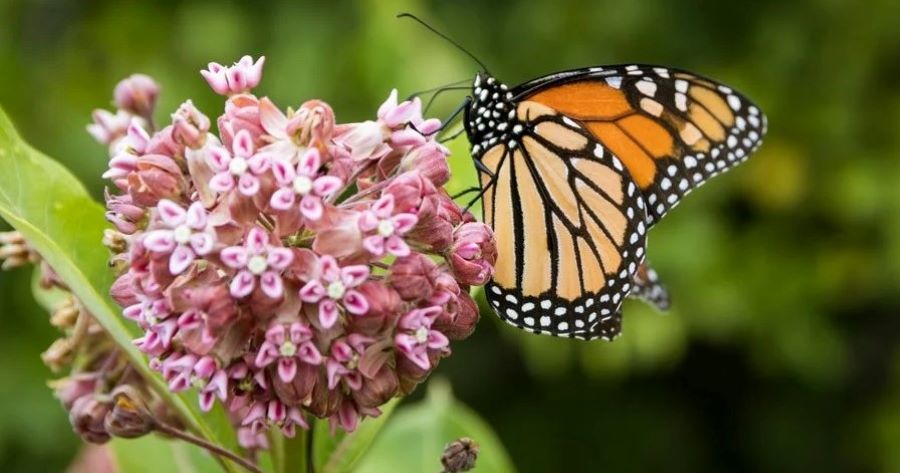 Monarch Butterflies, famed for their long-distance migration, depend on finding the only food their caterpillars feed on: the Milkweed, a wildflower of fields, wetlands, and prairies. Milkweeds are not only the foodplant of Monarch caterpillars, they protect them too. Chemicals within the plant are stored in the caterpillars strikingly bright body which make them distasteful to predators. These chemicals are kept when the caterpillars metamorphose, shifting to different parts of the body (mainly the wings and abdomen) when the adult’s bright colours also ‘warn’ off birds.

Researchers have now concluded that Monarchs prefer their larval food to be pesticide-free. As a rhetorical question that asks the absolutely bleeding obvious, ‘Do butterflies prefer not to be poisoned?‘ should be right up there with ‘Is the Pope Catholic?’, ‘Do bears cr*p in the woods?’, and ‘Are fox hunters absolute b*stards?‘.

Given that populations of Monarch Butterflies are in freefall – it’s been suggested that Western Monarchs are functionally extinct (ie at the level at which a reduced population no longer plays a significant role in ecosystem function) already – it is a question that may have has a predictable answer but it needed to be asked and answered – though asking whether anyone in the current US government will take the slightest bit of notice is another of those questions that anyyone with any interest in global politics will also already know the answer to.

Why this matters so much is that North America is in thrall to its massive pesticide-manufacturers. It is responsible for as much as a fifth of global pesticide use. As worrying as that statistic should be, according to a June 2019 report in the journal ‘Environmental Health’, the USA also lags behind other agricultural nations in banning harmful pesticides – the chemicals known to be devastating bee colonies, biodiversity in river systems, and insects across the planet. There are 72 and 11 pesticides approved for outdoor agricultural applications in the USA that are banned or in the process of complete phase-out in the EU and China, respectively. Of the pesticides used in USA agriculture in 2016, 322 million pounds were of pesticides banned in the EU. Pesticides banned in the EU account for more than a quarter of all agricultural pesticide use in the USA. The majority of pesticides banned in at least two of these three nations have not appreciably decreased in the USA over the last 25 years and almost all have stayed constant or increased over the last 10 years. The United States Environmental Protection Agency (US EPA) (which has been under consistent attack from the Trump administration) has all but abandoned its use of non-voluntary cancellations in recent years, making pesticide cancellation in the USA largely an exercise that requires consent by the industry itself.

Ironic that a glorious and well-loved insect which evolved to sequester and use naturally-occurring chemicals in plants to protect itself, should find itself at risk from chemicals developed by the same species that has also been assiduously levelling its habitat for decades. A ‘war on wildlife’? If we could ask Monarch Butterflies we suspect they’d sigh and say something like, “Do one-legged ducks swim in circles?”…

Milkweed covered in pesticide cocktails repels egg-laying monarchs and their larvae — but the extent of chemical use in some areas may leave the butterflies with no choice.

“Their populations have been reduced in the last 20 years due to many factors like climate change and deforestation in their overwintering areas, but we know little about pesticides, especially non-insecticidal products like fungicides and herbicides,” said Paola Olaya-Arenas, a postdoctoral scientist at Purdue University.

Previous research on pesticides and pollinators mostly focuses on bees in agroecosystems, she said. And most of those papers involved researchers exposing bees to neonicotinoids and analyzing their reactions. “They rarely have given them a choice,” said Ian Kaplan, a professor in the Department of Entomology at Purdue University and co-author of the study.

Some research has shown that the milkweed the species relies on for breeding and feeding may be packed with pesticides. In a new study published recently in the Journal of Applied Ecology, Olaya-Arenas and her colleagues researched if monarch adults and larvae inhabiting the Indiana corn belt changed their behavior when encountering these pesticides.

The team conducted both laboratory and field research to help them tackle the question. They took known data on the quantity of commonly used pesticides, including one insecticide, two herbicides and three fungicides, on milkweed plants in the field. They exposed larvae and adult butterflies to these pesticides, and also combined some of the pesticides and tested the adult butterflies’ reactions. “For the adults, we only tested the mix [of pesticides], because that’s how you find them in the field,” Olaya-Arenas said.

In their experiment, the researchers also found that larvae preferred pesticide-free milkweed when it came to four of the six compounds. Those larvae showed an aversion to feeding on the milkweed at both the mean and maximum concentrations of pesticides.

While it may seem like good news that the declining butterflies are able to avoid plants with potentially dangerous pesticides, there’s so little milkweed in the environment that they may not have many choices. “Most plants we found in the field are contaminated with pesticides” Olaya-Arenas said.

Kaplan agreed. “Monarchs are in no condition to be picky because of the reduction in milkweed over the past years,” he said. He also added that they may reject a plant with pesticide residue and go to another area that’s even less suitable.

For conservation purposes and management of natural areas, the researchers suggest a reduction in pesticide use and a redesign of crop/milkweed distributions within and between habitat patches in the landscape to help conserve the monarchs.

Bumblebees - canaries in the countryside?
The State Of Nature 2019
It's halloween, here come the ladybirds!
Podcast: Professor Dave Goulson | Minister for Pesticides One Year On
Bee-flies - not dangerous unless you're a solitary bee
War On Wildlife Shortcast | Nick Mole
War on Wildlife Shortcast | Professor Adam Hart
'Alarming' loss of insects - so why the jokes?
Bye, bye bees | Sum of Us
Good news for insects as EU bans thiacloprid 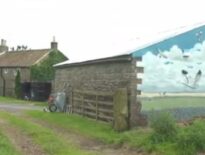