For those who aren’t aware, Forestry England allow a number of criminal fox hunts to use publicly funded forests for wildlife crime. They do this under the guise of licensing ‘trail hunting’ [a copy of their licence agreement with the Master of Foxhounds Association [MFHA] can be seen here], a false alibi for illegal hunting, with the documents created for this fake activity worth as much to Forestry England and fox hunters as the Hunting Act 2004 itself. In expecting us to believe that wildlife isn’t harmed on these so-called ‘trail hunts’, this government department expects us to ignore footage and public condemnation of the hunts in question. For example, let’s take a look at the Portman Hunt in Dorset.

The Portman Hunt were banned from Kingston Lacy, a National Trust estate where they had a hunting licence, early in 2019 [see here] after they killed a fox. Prior to this, the huntsman had appeared in court after hunting a fox on National Trust land in March 2017. Though he was found not guilty, he did state he made no attempt to prevent the hounds chasing the fox [more information & footage here]. And even this followed the hunt being warned by the National Trust about ‘extensively damaging’ Hambledon Hill, a scheduled ancient monument over 3,000 years old [see here].

But when the licence was granted to this hunt by Forestry England to ‘trail hunt’ on government land, all of this somehow became irrelevant – so irrelevant in fact that despite these previous NT breaches the department chose not to monitor a single one of the six dates they were licensed for [confirmed by the information request reprinted below].

In addition to all of the above, in January this year the Portman Hunt pursued a fox on to Forestry England land, and according to Wildlife Witness, a simple apology from the huntsman was all it took for Forestry England to take no action. FE has so far continued to be complicit in the actions of the Portman Hunt whilst other major landowners have turned their backs on them, and will remain so until they no longer licence them (and take action regarding the almost inevitable hunt trespass).

FE’s current policy is to continue licensing hunting with a few minor pandemic restrictions but we’ll see how the season turns out. 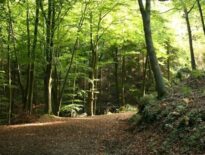