While we are now legally obliged not to meet in groups of more than six – for good reasons: there’s a pandemic out there that kills vulnerable people – people who want to go out and shoot wildlife have been exempted both here in England and in Scotland. Got a hankering to kill something? No problem. Itchy trigger finger bothering you? Go scratch. As Mark Avery put it yesterday, ” A day at the races? No. An afternoon at the football? No. Jogging with six friends? Of course not. A day on a grouse moor? Of course old boy…”

The Covid-19 pandemic is spreading fast, which is why the new restrictions have been brought in. Those restrictions are causing social, economic, and financial hardship to millions of people. Yet the shooting industry is treated as exceptional and given special treatment. Why?

We’ll explain further down in this post what we think the reasons are, but there was actually an awful inevitability about these announcements. Natural England’s ‘best buds’ the shooting lobby group BASC, have overtly worked to get shooting classified as an ‘organised sport’, and the government’s own advice page on shooting links directly to a page on the BASC website (how sweet, they’ll be sharing homes and going on family holidays together next…).

The UK government’s reasoning for allowing shooting to carry on as normal is that, “We have exempted over 30 types of sport, exercise and physical activity such as football, rugby and other outdoor pursuits. Outdoor activity is safer from a transmission perspective, and it is often easier to social distance. Where such activities take place, safety measures must be taken including conducting a risk assessment and compliance with Covid-19 secure guidance.” It barely matters that the optics of granting exemptions to killing wildlife while stopping families meeting up are incredibly bad, their conjoined lobbyists will say (as BASC’s chief-executive did yesterday), “The exemption will allow shooting to operate under Covid-safe guidance…The government’s decision to allow shooting to continue in its current format in England is the right one.”

To be absolutely fair (and putting aside our own innate revulsion to killing wildlife for fun) there’s some merit in saying that shooters can kill whilst maintaining social distancing. They can indeed spread out to kill pheasants, shooting butts are really only designed for one or two people anyway (perhaps the person doing the killing and the person helping load the guns), beaters can spread out as they flush farmed birds towards the shooters, and if they can resist the ‘camaraderie’ of meeting up to discuss how many holes they put in how many birds afterwards then they will indeed be respecting the terms of the law, if not the spirit of it.

Whether they can resist it remains to be seen. The widely-copied tweet below (taken just before the new ‘Rules of Six’ came in but, even so, where are the face coverings, the social distancing?) does make you wonder. If shooters feel comfortable enough to broadcast their disregard for the wider community, why would they bother adhering to a set of rules that they’ve specifically been partially exempted from anyway (‘partially’ because they still need to maintain social distance etc)?

So, yes, purely on the question of ‘Can shooting maintain the Covid-19 rules in an outdoors environment?’ the answer is probably yes.

But that’s not really the question most of us will be asking. It’s more along the lines of, “Why the F should a bunch of people with guns be exempted” when, as Alison Johnstone MSP pointed out yesterday, ‘30 people cannot attend a wake for a lost loved one‘? But when you really think about it, the government hasn’t even made an especially peculiar or outlying decision here. Shooting was confident, they’d get what they wanted, and it’s not hard to see why: look back at every exemption, every licence, every ‘cull’ that shooting has gone for and achieved (and every Tory Party fundraiser where birds were auctioned off to party loyalists, as reported in the Mirror newspaper), and this is well within the curve.

How has it come to this though?

This won’t be a popular opinion (not that being unpopular has ever stopped us saying what we think) but it really shouldn’t have come as a surprise to anyone paying attention. Never mind that their ‘sport’ is underpinned by wildlife crime, that they kill millions of wild birds, kill millions of native predators, wreck scarce upland habitats with fires and tracks, and plan on fighting totally sensible controls on lead shot, shooting has always been treated ‘differently’, and not just by government. What it does has been ignored by far too many of us – and that includes major conservation figures and organisations – for decades. Why wouldn’t shooting feel it’s ‘exceptional’?

Forget arguments against shooting that invoke wealth or class (except for valid discussions about land ownership, they’re pretty much historical dead ends as far as we’re concerned and far too easily parried) shooting believes in its exceptionalism because it is still perceived as somehow ‘different’, set apart from the normal mores. Shoot a robin, the condemnation will be immediate. Shoot 50 million pheasants and even many birdwatchers don’t seem too bothered. Set out an illegal spring trap and catch a family pet, quite rightly we are all horrified. Set out an untold number of traps and snares to protect shooting’s profits, and many people won’t see the obvious parallel at all. And while we have politely debated ‘rough vs driven’, ‘for the bag vs for sport’, hired its gamekeepers, and included its lobbyists in our discussions, the shooting industry has been ruthlessly 100% focussed on the one issue that matters to them – ensuring that they can carry on killing no matter what (and that includes pandemics).

Undoubtedly there is a change taking place in the public mood. In recent years there has been more opposition to shooting (kudos to, for example, the Moorland Monitors, LACS, the Hunt Sabs). As more and more information is uploaded into the public domain about illegal raptor persecution, trapping and snaring, the use of lead shot, the burning of precious habitats, animal sentience and moral status, the reaction goes only one way. Few people learning about the horrific reality of shooting thinks, ‘Yeah, got to get me some of THAT!’ but when the government is happy to waive through a bunch of gunmen while halting families in their tracks, then there is clearly still a way to go.

Can that change be turned into something more positive? Something that could perhaps lead to a co-ordinated and unified move against a disgusting ‘sport’ that has a far higher opinion of itself than it actually merits? Can we work across platforms and across the existing ‘boundaries’ of organisations and campaign groups? Can we find that ‘common ground’? Of course we can, but first we have to decide if that’s what we all actually want…

What do we do with a problem like Malta?
Countering the persecution of Peregrines
Animal Welfare and the General Election 2019
While we were in lockdown, the wildlife criminals were out in force
Great news - it's becoming too risky to buy a grouse moor
A War on Wildlife? | Simon Constantine
Solastalgia - a quiet mourning
Pheasants | Mark Avery
RSPB | New Raptor Persecution figures
Lockdown: birding vs shooting?

Why does shooting believe… 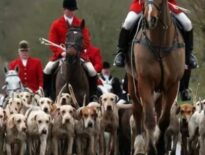 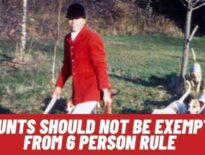 Blog Posts Petition: Hunts and shoots should not be exempt fr…
0