Jack Riggall, an independent hunt monitor and anti-hunting campaigner, is writing a series of posts for us on fox hunts and Forestry England (FE), the government department responsible for managing and promoting the nation’s forests. Forestry England (like the National Trust) does important conservation work and protects important sites, but appears to have the same blindness as the Trust when it comes to the fabricated ‘sport’ of so-called ‘trail hunting’, an invention of fox hunts which enables them to continue hunting while they work for repeal of the Hunting Act 2004. The Act banned using hounds to hunt wild mammals and is supported by a huge majority of the public.

As Jack wrote in “Forestry England, National Trust, and Fox Hunting“, FE gave licences to 34 fox hunts to ‘trail hunt’ on government land last year. In that same post, Jack pointed out that “The Trust banned terriermen as part of its licence conditions, clearly showing that they know about the criminal nature of the hunting organisations they are giving licences to, but FE has made no such licence condition for the new 2019-21 licence even though there’s a crossover with the hunts that both organisations licence. The Chiddingfold, Leconfield & Cowdray Hunt and the Vale of White Horse Hunt have licences for ‘trail hunting’ on land belonging to both the Trust & FE, so if the Trust need to make it clear to these two hunts that they can’t bring their terriermen with them, why hasn’t FE done so as well?”

Last week Jack noted that that the Forestry Commission (Forestry England is an Executive Agency of the Forestry Commission) had appointed a new non-executive Chair, Sir William Worsley. He is a member of the Countryside Alliance, an organisation renowned for its support of bloodsports (see its ‘Campaign for Hunting’) and which as recently as 17 Feb 2020 posted a press-release on its website saying that: “There were never any valid arguments for banning hunting and the Hunting Act is almost unique in that it brings no benefits. Not to the countryside, not to rural communities, not to wildlife and not even to those who spent so long promoting it“.

Might, asked Jack, membership of such an organisation mean that the new Chair supports fox hunting and the overturning of the Hunting Act? Might the appointment of Sir William Worsley prevent positive changes to Forestry England’s hunting policy?

Those seem entirely legitimate questions given the relationship between FE and the Forestry Commission, and we were intrigued to be forwarded a letter obtained under a Freedom of Information (FOI) request to Defra which at the very least suggests that Sir William is not well inclined towards Hunt Saboteurs (who work in the field to protect wild animals from illegal hunting of course) or ‘animal rights and environmental activists’.

The letter was written in 2011 (therefore, note, some years after the passing of the Hunting Act which came into force in 2005) by Sir William in his capacity as President of the Country Land and Business Association (the CLA, and formerly known as the Country Landowners Association). It’s addressed to Caroline Spelman (then Secretary of State for Environment, Food and Rural Affairs in David Cameron’s coalition cabinet, and now a Dame) and is mostly concerned with the CLA’s active support for a badger cull – which of course is underway and still being expanded in 2020 (the UK government is rapidly moving from “badger control to badger annihilation” as it expands the badger cull policy to 11 new areas of England, according to the Badger Trust).

The sections in the letter about the cull are not particularly relevant to the questions being asked in this post, so we have only uploaded two excerpts below which we think are revealing of Sir William’s thoughts about sabs and transparency.

We are well aware that this mail wasn’t written specifically about fox hunting (though clearly the subject was on his mind as it was brought up by the author himself) and also that attitudes can change, though by 2011, Worsley, who was born in 1956, probably held quite firm views on so-called ‘countryside’ issues.

It’s interesting to note Sir William’s thoughts on strict confidentiality around ‘details of applications‘ and ‘grants for licences‘. That was about badger cull licences of course, but might it mirror the thoughts of the new FC’s Chair on applications from fox hunts for licences to hunt on FE land? There appears to be nothing to suggest that at the moment, but FE can be sure that we and others will be watching closely for any changes to existing FE protocols.

It’s also interesting to see how, behind the scenes, lobbyist groups like the CLA are quite prepared to suggest to the government how a ‘public relations strategy‘ should be shaped. The Countryside Alliance certainly attempts to shape the public image of so-called ‘trail hunting’, and the arguments to support it (which largely consist of repeated claims that hunts behave legally (despite the evidence to the contrary), that there are few convictions under the Hunting Act (which is inaccurate), and that fox hunting is widely supported by the public (again, untrue)) are indeed very similar to the defence of ‘trail hunting’ used by both FE and the National Trust. As an aside, can you imagine the reaction in the mainstream media were, for example, the Hunt Saboteurs or the League Against Cruel Sports to so advise an Environment Secretary?

To get back to the questions Jack asked last week though:

We’re of course not going to second-guess Sir William’s thoughts on hunting or his current feelings towards the Hunting Act (and Jack Riggall isn’t doing that either, simply asking legitimate questions of an appointee to a public body), but it’s probably safe to say that in 2011 at least he was not noticeably supportive of the pro-wildlife movement.

Whether he will be looking to change FE policy is not something we’d speculate on either – but the issuing of licences to hunt is of great public interest (and given that both the English and Scottish governments have banned gatherings of more than six people there really is no excuse to licence ANY hunts in 2020). Any attempt to hide details would rightly be called out and strongly opposed. After all, if fox hunts aren’t breaking the law then they have nothing whatsoever to hide and there should be no problem any of us knowing where they are and when. (As many have long argued, the best way to demonstrate the legitimacy of ‘trail hunting’ would be to invite monitors to watch and report their findings, but needless to say that idea has been rejected by hunters on many occasions.)

Fox hunting is illegal, a ‘dying sport’ with little public support. ‘Trail hunting’ is a fabrication, and certainly has no place on land owned either by the government or by ‘conservation’ charities. Both the English and Scottish governments have banned gatherings of more than six people and there really is no excuse to licence any hunts in 2021. There really is only one direction of travel in this debate, and that is towards a full ban or at minimum a far more transparent system of licencing, of monitoring, and of rigorous enforcement against law breakers. We hope that both Forestry England and the National Trust recognise that sooner rather than later…

In the meantime if you witness an illegal hunt: 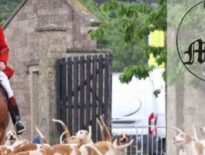 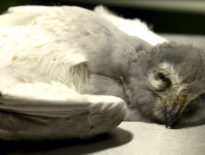