Lynn Sawyer has been an animal rights activist for decades, first as a hunt saboteur but more lately working full-time to tackle the badger cull. She was part of the group that set up the Gloucestershire Badger Office (GBO), a collective that provides logistical and practical information on the Gloucestershire badger cullzones. The Gloucester Badger Office is happy to advise/support nationally but do not coordinate nationally, preferring to pass individuals on to other groups. They aim to encourage local groups to grow autonomously and organically without a hierarchy.

Lynn has spent many evenings in the past out in the field defending badgers, but now is up and out early to help prevent foxhunts from cubhunting (see our post Cubbing | An autumn sickness for an explanation of this particularly sick form of illegal animal abuse).

An inspirational, deeply committed activist and organiser, we were grateful to speak with Lynn in early October 2020 to find out more about her work.

Lynn, the ‘officlal’ badger cull started in 2013, but you’d been preparing for it before that…

And you’ve been tackling the cull ever since?

Knowing where setts are located is the priority?

It’s not just the cullers that have been targeting badger setts?

You mentioned ‘bait points’. That’s where the now well-known use of peanuts comes in…

When are the shooters active?

Badgers can be trapped for several hours overnight (and, legally, up until midday). Being trapped in a cage for so long must be incredibly stressful for a wild animal. Do you think welfare considerations are taken into account by cullers?

There’s plenty still to do?

And when the culls are finally shut down?

Lynn, finally, do you have any thoughts on how someone reading this could help tackle the cull?

The majority of people who are working to protect our wildlife are volunteers. Fuel and running costs etc are expensive. If you can please donate to Gloucestershire Badger Office and the Three Counties Hunt Sabs here paypal.com/paypalme/threecountiessabs

network23.org/3CHuntSabs – protecting wildlife in Worcestershire, Gloucestershire & Herefordshire & working in solidarity with campaigns across the UK 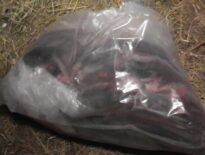 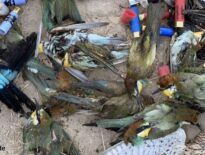 Blog Posts Yet another bird slaughter in Cyprus
0