Several activists (including ourselves) are engaged in a bit of an online ‘debate’ at the moment with the National Trust about their granting of licences to ‘trail hunt’ on their land. Why? Because so-called ‘trail hunting’, as we repeatedly state, is a lie. It was invented by hunts on the passing of the Hunting Act 2004 (which banned the hunting of wild mammals with dogs) to ensure hunts could keep hunting and could keep the paraphernalia of hunting intact while they work for repeal of the Act. ‘Trail hunting’ has been proven to be a lie on innumerable occasions: monitors see no scents being laid, wild mammals are still being chased, and animals are still dying.

The problem has always been that hunts and hunt lobbyists have felt comfortable lying because they assume that just because a few hunt sabs, activists, charities, and groups say ‘trail hunting is a lie’ the public and the national media won’t be interested. They can get away with it, in other words. And if they do get caught they assume they can just bluster on about ‘lack of evidence’ and walk away without anyone being too bothered…

Only, their assumptions are wrong. We are all increasingly bothered by the fiction of so-called ‘trail hunting’. The public is increasingly sceptical about the claims of fox hunters. Sabs and monitoring groups are better equipped, take better video and photographs, and are better organised and work together to keep issues like this alive on social media. And as the evidence piles up, even the national media has sat up and taken notice. 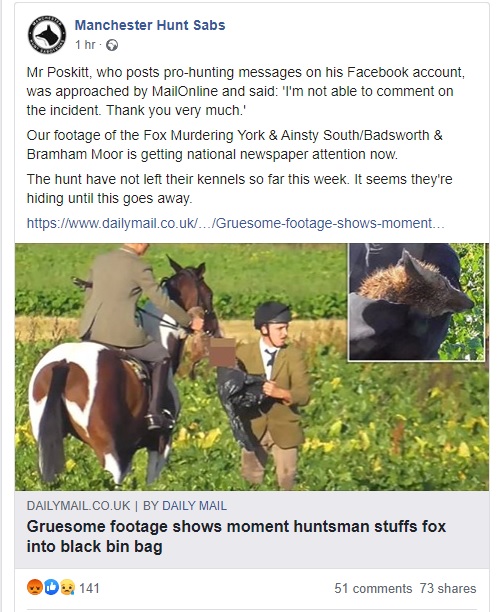 Thanks to the work of the Manchester Hunt Sabs, the incontrovertible evidence of wildlife crime by the York and Ainsty South Hunt and the disgraceful behaviour by hunt whipper-in Mark Poskitt (who owns M H Poskitt, the ‘home of the happy carrot‘, a Red Tractor assured company and part of the Country Stewardship Scheme which “provides financial incentives for farmers, woodland owners, foresters and land managers to look after and improve the environment“) is now saved for posterity on the pages of The Mail Online. And whatever anyone might feel about the Mail’s politics it does have a huge readership, many of whom say that they are avowed ‘animal lovers’.

To quote from the Daily Mail which is reporting this story:

The video, obtained by MailOnline, showed farcical scenes being played out on a weekday morning in open fields full of crops off Second Common Lane near the market town.

After struggling to get the fox cub’s body into a binliner and giving it to another rider, the Hunt’s whipper-in or assistant, identified as Goole carrot farmer Mark Poskitt, is seen wiping his bloodied hand on his horse before remounting.

He is then captured listening to his mobile phone before riding off to rejoin the rest of the hunt.

Just an hour later, the hounds seemingly strike again, but this time the moving of the body goes horribly wrong.

Mr Poskitt jumps off his horse into the field, deep in crops, to retrieve the fox from the hounds who are tearing it apart.

Grabbing the dead animal by the tail, he passes it to another huntsman but as he does so the rider’s horse delivers a back-kick to Mr Poskitt’s thigh area.

The spooked horse then tosses his own rider off, leaving both men and the dead fox lying in a field of beet.

As the huntsmen set off in search of their escaped steeds, hunt saboteurs retrieved the fox’s remains and took it to a vet for a post-mortem

‘Farcical scenes’ or not (and we’d suggest that despite the comedic value of falling about and making an arse of yourself, none of this is remotely funny), the evidence is unequivocal – as is so much of the original evidence on social media. It’s hard to see how hunting lobbyists will dig themselves out of this particular hole. It’s also hard to see just how large landowners like the National Trust (and Forestry England, see a series of posts by independent monitor Jack Riggall about FE on this site) can justify continuing to dole out licences to ‘trail hunt’ when it facilitates exactly this kind of law-breaking.

it’s no coincidence that fox cubs were killed by this hunt, by the way. As Alec Holland of the Manchester Hunt Saboteurs explains later in the Mail’s article, this is the time of the year when hunts go out deliberately looking for cubs. It’s even called ‘cubbing’. And it’s illegal. Hunts have been trying to disguise this particular form of animal abuse by calling it ‘autumn hunting’ (or even ‘exercising the hounds’) but as we explained in Cubbing | An Autumn Sickness, hunts are out at this time of the year to essentially train young hounds to kill foxes because dogs don’t naturally kill foxes – they ‘need’ (according to fox hunters anyway) to be trained to kill them. For that, they use fox cubs who are far more vulnerable than adult foxes: they’re old enough to be exploring but not yet developed enough to outrun a pack of hounds. How any of this could be compatible with ‘trail hunting’ is never explained. But then it can’t be because it isn’t: if hunts are training hounds to chase foxes, then they are training them because they plan to break the law.

Stories like this only come to light because of the determination and courage of sabs and monitors. What the Manchester Hunt Sabs have achieved by getting this disgusting behaviour into the national media is remarkable. Like sabs everywhere, though, they will see this as just one battle in the ongoing war on wildlife waged by hunts using the lie of ‘trail hunting’ to chase and kill wildlife. They will be back out, risking attacks by hunt supporters and damage to their vehicles.

If you can donate something towards those efforts it will be much appreciated. Please go to https://ko-fi.com/manchesterhuntsabs. Thankyou. 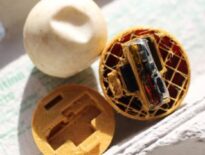