A tweet showing a Natural England sign which restricts access to land at Knapp Down, near Salisbury (Wiltshire) to ‘avoid disturbance to game and disruption to shooting’ has (rightly) gone viral (kudos @KeggieC). What on earth is Natural England – the government’s adviser for the natural environment in England. “We help to protect and restore our natural world” – doing?

The case number on the sign reads 2008090036. A quick internet search leads us to a Notice of Relevant Authority Decision following review of Direction restricting CROW Access rights.

CROW is the Countryside Rights and Ways Act 2000 which “gives a public right of access to land mapped as ‘open country’ (mountain, moor, heath and down) or registered common land. These areas are known as ‘open access land‘.”

The government’s advice on open access land gives a list of what people can and can’t do on this land. They can walk, birdwatch, sightsee, and run for example. They can’t ‘disturb livestock, wildlife or habitats with intent’, ‘play organised games’, or ‘commit any criminal offence’.

So, a landowner would have to have a really good reason to stop the public (or birdwatchers, hikers, and sightseers) accessing ‘open access land’ then? They would have to have serious concerns about noise or habitat destruction perhaps? Have advance knowledge of a five-a-side football match? Be worried that a criminal offence (like raptor persecution perhaps) may take place?

In some cases, maybe, but if you’re a shoot operator in Wiltshire with what are termed ‘signature drives’ and you’re worried that the public might disturb your fee-paying shooters or upset the thousands of non-native ‘gamebirds’ you’re releasing, then Natural England will write a bunch of guff about ‘Why is a Statutory Restriction Necessary’ banning access to open land for you which looks like this:

That’s right. The public is shut out of open access land because there may be disturbance to non-native birds ‘pre-season’, during the season, and possible disruption to the shoot on shoot days! Shut out BY NATURAL ENGLAND. Because of DISTURBANCE to a bloody shoot. Astounding…

Incredibly Natural England spends a few pages of this June 2020 decision sympathising entirely with the shoot, the gamekeeper who may lose his birds if they wander off, the impact of sightseers on the profits of a ‘small’ shoot. Not once do they mention the impact on local wildlife of releasing ‘gamebirds’ or the disturbance that shooting itself creates. Nor do they mention that adjacent Gurston Down (which is regularly shot over by the same shoot) includes a Site of Special Scientific Interest, supports rare plants such as Dwarf sedge and bastard-toadflax, or that the toadflax-associated Down Shieldbug – known only from a few sites in southern England – occurs here.

If this ‘Decision’ were written by a pro-shoot lobby group it couldn’t be more ‘onside’ and less concerned with either wildlife or the public.

Natural England have form of course (see Natural England and BASC produce shooting report) but the absurdity of a government department which is supposed to ‘help to protect and restore our natural world‘ mollycoddling shooting is further compounded by the statement that “Natural England’s policy for long-term directions is that they should not be given for a period of more than six years. Therefore the original direction will be extended to an end date of 1st February 2026.” Does that really mean that for the next six years Natural England intends to wrap this shoot in cotton wool, protect it from the public, and restrict access to land we are all supposed to have access to under the CROW Act? It reads that way.

Shooting - at least the Conservatives have a policy?
The 'voices of the countryside', raptor persecution, and trophy hunting
A quick note to Alexander Armstrong
Great news - it's becoming too risky to buy a grouse moor
Pheasants | Mark Avery
Reading not Shooting
Why does shooting believe in its own exceptionalism?
Werritty - because grouse just exist to be shot?
What The Actual F(ire)
Revive | 'Untold Suffering' 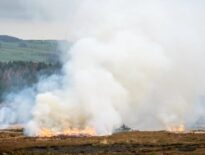