What an achievement! Wild Justice has just announced via their blog that they have secured a remarkable legal victory. After challenging Defra (the government department responsible for the environment) in court over the potential threat to protected sites and species from the unregulated releases of around 60 MILLION pheasant and red-legged partridges by the shooting industry, Wild Justice have secured a long overdue review and a future licencing scheme. On top of that, pheasants and red-legged partridges (both beautiful but non-native birds, so only found here because of shooting releases), have been added to Schedule 9 of the Wildlife and Countryside Act, which places them alongside Japanese Knotweed and other species “which cause ecological, environmental or socio-economic harm”. (Defra’s full response is here)

The shooting industry has – astonishingly – been entirely unregulated for decades, simply (in effect) tipping millions of non-native birds in to the countryside (the biomass of which is estimated to be the total of all the other birds in Britain PUT TOGETHER) without having to have any consideration what effect those birds might be having. Not any more…

While this is something of a first step (at least for those of us that would like to see a complete ban on shooting birds), it’s something of a giant step too – and very satisfying to see that the shooting industry has to work within the terms of the law just like the rest of us…

Just days away from facing a barrage of legal arguments in court (on 3 and 4 November) DEFRA has agreed to license the release of Pheasants and Red-legged Partridges to control ecological damage to wildlife sites.

Wild Justice mounted a legal challenge to make DEFRA review harmful gamebird impacts and introduce proper protection for wildlife sites and we have got DEFRA to address both.  There is more to do to make sure this regulation is made to stick but we have reached the limit of what the legal system can do at this stage.

Wild Justice expects that a proper licensing system, compliant with the Habitats Directive, will require the following actions: 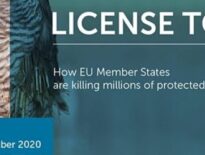