Well, well, well. The impossible dream becomes possible with imagination and hard work. Huge congratulations to the team at the Langhgolm Initiative who this afternoon announced that with just hours to go before a deadline was reached they’d succeeded in a buy out of a grouse moor, which they plan to turn into a potentially hugely important nature reserve.

Langholm Moor, in the Scottish borders, was put up for sale by the Buccleuch Estate in May last year. Langholm is known to most of us interested in the links between Hen Harrier persecution and shooting profits (the former are legally protected, the latter are most certainly not), as the site of two long-term studies which were supposedly intended to better understand the so-called ‘conflict’ between raptors and grouse moor management. As of writing the results of the studies (which were shut down early) have still not been published.

Fortunately, rather than seeing the land being sold on to grouse farmers, a group of locals proposed a land buy-out to take the grouse moor into community ownership and relaunch it as “species-rich nature reserve to benefit local people, nature conservation and tourism“. This land would then be managed as the ‘Tarras Valley Nature Reserve’, which would see globally important peatlands and ancient woods restored, native woodlands planted and regenerated along river valleys, and open moorland protected for ground-nesting birds.

The South of Scotland’s largest community buyout is set to go ahead following one of the most ambitious community fundraising campaigns ever seen – with the community of Langholm in Dumfries and Galloway raising the final funds needed in the nick of time.

A landmark community buyout agreement of £3.8 million for over 5,000 acres of land has been reached between The Langholm Initiative charity and Buccleuch – paving the way for the creation of a huge new nature reserve to help tackle climate change, restore nature, and support community regeneration.

Discussions will continue over the remaining 5,300 acres of land the community has expressed an interest in buying.

Benny Higgins, Executive Chairman of Buccleuch, said: “We’re absolutely delighted to have reached a significant agreement with The Langholm Initiative, and this deal demonstrates what can be achieved when everyone involved is committed to working together. The community has done a tremendous job in raising the funds to make this historic acquisition, and the plan to create a nature reserve has attracted widespread support. We wish the project every success.

“Engaging constructively with the communities in which we operate as a business is important to us. We have a long-standing policy of reducing our overall footprint to enable us to invest in other projects, and will continue this policy of selling land to interested farmers, community bodies and organisations which express an interest.”

Margaret Pool, Chair of The Langholm Initiative, said: “This is an amazing result for Langholm which will live long in the memory. Our community has a strong cultural connection to this land, which has never been sold before, and securing it for generations to come means so much to so many. Huge thanks to Buccleuch for their positive engagement.”

Roseanna Cunningham, Cabinet Secretary for Environment and Land Reform, said: “The completion of The Langholm Moor project is a momentous moment for land reform in Scotland. The project secured a £1 million Scottish Land Fund grant in June, and it is of great testament to The Langholm Initiative that they have secured additional funding, and worked collaboratively with Buccleuch Estates, to bring 5,000 acres of land into community ownership. I commend both The Langholm Initiative and Buccleuch Estates for enabling the buy-out to be completed.

“This is significant news for the South of Scotland but also demonstrates that, when working together with a shared goal, local communities can be a power vehicle for change. I applaud the Initiative wholeheartedly for realising their ambition and look forward to it inspiring other community groups to drive and deliver their own projects right across the country.”

The purchase – to be finalised by January 2021 – will lead to the creation of the Tarras Valley Nature Reserve, with globally important peatlands and ancient woods restored, native woodlands established, and a haven ensured for wildlife including rare hen harriers. The project will also support community regeneration, including through plans for the community to capitalise on new nature-based tourism opportunities.

The Langholm Initiative had until 31 October to raise the funds for a deal, to avoid the Scottish Land Fund withdrawing their £1 million offer – a proviso that left the community with just months to raise millions of pounds. At times during the summer, the project appeared to be seriously at risk.

In the run-up to the deadline, Buccleuch Estates and The Langholm Initiative agreed a revised £3.8 million price for the purchase.

With The Langholm Initiative still requiring substantial funding in the final weeks, £500,000 was secured from the Bently Foundation. Camille Bently, Director of the Bently Foundation, said: “The Bently Foundation is delighted to support this community-led environmental project. We wish them every success and look forward to visiting the new Tarras Valley Nature Reserve in future.”

During the final week, an extraordinary surge of more than £50,000 donations to the charity’s public crowdfunder – including £24,000 on one day alone – saw the appeal’s £200,000 target achieved. Nearly 4,000 people have supported the crowdfunding appeal since its launch on 7 May.

In the final 48 hours before the deadline, and with the community still some £150,000 short of the total funds needed, The Woodland Trust agreed to contribute £200,000 to the project – taking The Langholm Initiative over the line.

Carol Evans, Director of Woodland Trust Scotland, said: “We are thrilled to support The Langholm Initiative’s exciting plans with a financial contribution and help deliver new native woods set in an appropriate mosaic of other habitats at Langholm. The world faces a climate emergency and a biodiversity crisis. This initiative is a fightback against both threats.”

John Watt, Scottish Land Fund Committee Chair, said: “This is a momentous day for The Langholm Initiative and the wider community, who have pulled together and worked extremely hard over recent months to meet their fundraising goal. On behalf of the Scottish Land Fund, a huge congratulations to everyone involved. We are proud to be able to support them with a £1 million award that will contribute to their exciting community ownership plans.”

“Community ownership can be a catalyst for regeneration, which we want to show can be done with the environment at its heart. We hope the success here will encourage and inspire other communities in Scotland and across the UK. Realizing the full potential of community ownership will take time – and the hard work is really just about to begin.”

Other leading charities that have supported the buyout include Borders Forest Trust, Rewilding Britain, RSPB Scotland, Scottish Wildlife Trust, and Trees for Life.

The Langholm Initiative, formed in 1994 as one of south Scotland’s first development trusts, facilitates projects making a lasting difference to the local area and people. See langholminitiative.org.uk.

Podcast: Checking in with Bob Elliot, Director of OneKind
RSPB | Catalogue of bird crimes in Peak District NP
Podcast: Dr Mark Avery | Minister for Upland Ecology (One Year On)
Mail Online lobbying (badly) for grouse moors
North Yorkshire 'black hole for raptors' says Yorkshire Post
Podcast: Checking in with Nick Weston, League Against Cruel Sports
Guest Post | Coronavirus - A Potential Cover for Wildlife Crime & Cruelty?
Buzzard found shot near Appleton-le-Moors
Portrait of a fox cub on grouse moor
While we were in lockdown, the wildlife criminals were out in force 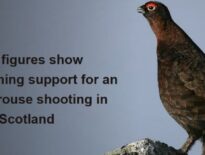