In support of our ‘Language Matters’ campaign, which looks at how language is used to influence how we all think about wildlife, we’re delighted to host a guest post from author and campaigner Bob Berzins. Bob lives on the edge of the Peak District. Climbing on gritstone crags and running over the moorlands has brought him a deep understanding and appreciation of the Pennine uplands. He’s worked with activists and wildlife charities, spoken to police of all ranks and crime commissioners in an effort to improve the plight of wildlife in the National Park. He has also trained and worked as a counsellor which has helped him bring psychological depth to his writing. We reviewed Bob’s excellent first novel ‘Snared’ here.

Language, Entitlement and Ownership – How to kill without feeling

Almost every one of us has some level of kindness and compassion yet humanity as a whole repeats an endless cycle of atrocity, war and genocide. There are many factors responsible for such large scale violence but a long process of messaging and language almost always precedes the killing. We separate ourselves from the “Other” and only hear a narrative that reinforces the message they are worthless, bad and a threat to us. This is an example of all or nothing thinking, or in psychotherapy terms, Splitting. And if we delve into our psyche, we find that such splitting is an unconscious defence – we are defending ourselves from the ambiguity and uncertainty of having to deal with situations that aren’t clear cut and would lead to anguish and turmoil in ourselves. Certainty is easier. Unconscious simply means the sum of experiences we’ve had that leads us to act without thinking, in this case a constant messaging that somebody or something is all bad. This in turn, gives us “permission” to do something bad to them.

A current example is the constant dehumanising message from right-wing media about asylum seekers. Proposals to “process” these people on a rock in the middle of the Atlantic only just failed to take hold. And you have to pick up a newspaper like The Guardian to discover the human tragedy of a family drowning in The Channel. One definition of vermin is people perceived as despicable and as causing problems for the rest of society and another definition is wild animals that are believed to be harmful to crops, farm animals or game or which carry disease.

So vermin people and vermin animals really couldn’t be any worse. And no wonder our relationship with animals and birds follows much the same pattern I’ve described above, we split them into good and bad, with corvids in particular firmly in the “bad” camp. No matter what we do to corvids their numbers keep increasing, giving us permission to kill even more, because if we don’t they will cause us untold harm.

In contrast, Ed Douglas’s Country Diaries in The Guardian are vivid experiences of wit and the joy of experiencing our natural world free from the prejudice of terms like vermin. He describes the cognition and consciousness that crows undoubtedly experience and wondered what would happen if we treated primates in the same way – well, we wouldn’t be able to split them off because they are too much like us.

The concept of vermin is very firmly rooted in rural life and forms part of a message from the countryside that we know best. Governments of every flavour bend over backwards for farmers, rural communities and rural pastimes, without question and without challenge. We really must believe if we upset the farmers, they’ll turn off the food supplies and let us starve. Whenever there’s a problem in the countryside the solution is to kill and kill some more. Badgers must be vermin because they carry disease, so the solution is to kill them all using taxpayers money, no matter what the scientific evidence tells us. We know best and the Government agrees.

Any bird used as a decoy or lawfully trapped is the property of the operator of the trap. To release such a bird could lead to prosecution under Section 1 of the Theft Act 1968. How did a free, wild bird that might have been born anywhere in Europe suddenly become the property of a gamekeeper? Quite easily when you realise our laws are drafted to perpetuate ownership and privilege, including the right to inflict “necessary” suffering on these wild animals.

Take a look at the contents of the trap: 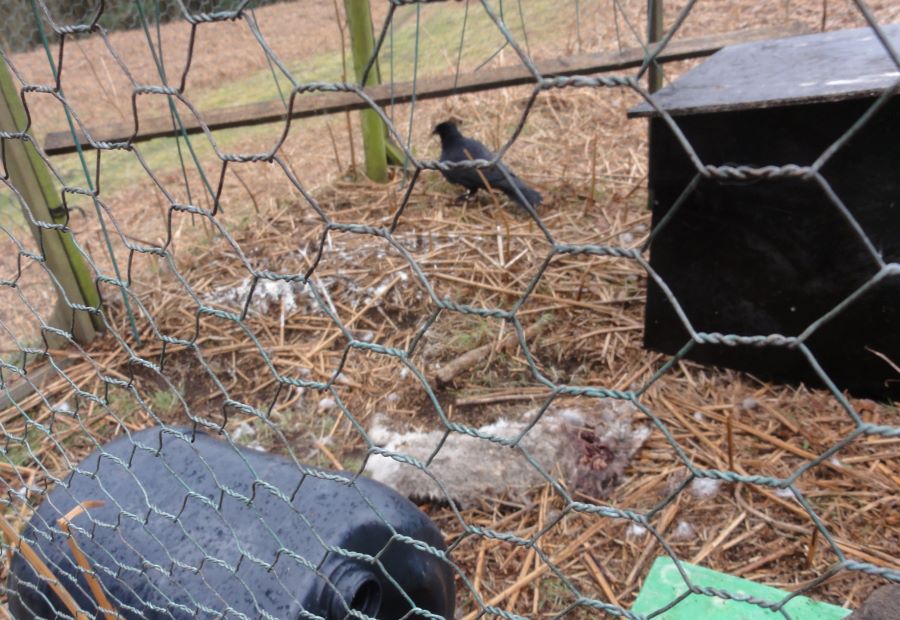 So a rare (definitely rare in the Peak District) Mountain Hare has been killed and used as bait and a crow “Call Bird” will suffer in a cage for several months at least.

This is quite a challenge for any feeling person and difficult to see this suffering as justified even if wader numbers are struggling. But perhaps I’m projecting my own compassion here? The Government, NGOs and many conservationists advocate precisely this type of trap or smaller, crueller, Larsen traps to kill corvids. Rather than having to see animals and birds suffering in these traps there’s the handy psychological defence of distancing – delegating the work to someone else. All that matters is the result. We know best. And a Government National Park Authority is backing the grouse shooting landowner to the hilt – no surprise when PDNPA has spent over £100,000 of taxpayer’s money on its own gamekeepers (for ‘conservation’ of course).

Ownership of a shooting estate gives the privilege of life or death over good Game and bad vermin which may include protected animals. Killing vermin is necessary to protect a way of life and killing Game is somehow a sport? There really is something very wrong here.

You might wonder if my call for us all to live through the chaos and uncertainty of taking a compassionate view is really just hypocritical. After all, in my novel ‘Snared’ there aren’t many redeeming features of gamekeeper John. Just recently when a gamekeeper took exception to me photographing his burned moor, he told me there had been cool burns leaving the moss layer intact, when I could see total incineration. The smoke hadn’t drifted towards town when I’d been breathing it miles away from the moor. And the pack of hounds I could now hear in the nearby woods were on a trail hunt – as if such a thing existed. And by the way, the fox cubs, all grown up now, were fair game. He had a pleasant manner, that’s all I can say.

An audiobook version is available for a small donation here, with all profits going to IDAS, the largest specialist charity in Yorkshire supporting anyone experiencing or affected by domestic abuse or sexual violence. 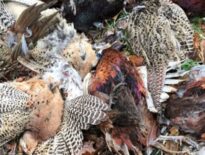