Here’s an interesting story. 1200 wild-caught hares that were being held by coursing clubs (yes, incredibly hare coursing is a legal ‘sport’ in Ireland) have been released back into the wild because covid restrictions mean that coursing has been suspended.

It’s ridiculous that in the 21st century, with all the evidence around the harm that coursing causes to these beautiful animals, ‘clubs’ should be capturing and keeping hares anyway, but what really struck us was a disingenuous platitude quoted in the Irish Times (copied below). The paper reports Darragh O’Brien, Minister for Housing, Local Government and Heritage saying that “it formally requested the clubs to release all of the captive hares due to the importance of “the welfare and conservation of a protected species”.

‘A protected species’ that is still being coursed? Yes, bizarrely, to quote the Vincent Trust, “The Irish hare is legally protected since 1930 in the Republic of Ireland, initially under the Game Preservation Act (1930), then by the Wildlife Act (1976) and Wildlife (Amendment) Act 2000. It is listed on Appendix III of the Berne Convention, Annex V(a) of the EC Habitats Directive (92/43/EEC) and as an internationally important species in the Irish Red Data Book. However, it is also classified as a game or quarry species and may be hunted under licence during the open season. Under licence hares are captured for coursing.“

Which makes it even more ridiculous that hares are caught. But why have we singled out Mr O’Brien and called his statement a disingenuous platitude? Because guess who is the Minister responsible for licencing the hunting and capture of hares for coursing in the first place? Of course, that would be the Minister for Housing, Local Government and Heritage, Darragh O’Brien, who just weeks ago confirmed in a parliamentary question reply that his department issued licences on September 16th “to the Irish Coursing Club (ICC) on behalf of its affiliated clubs to net and tag hares for the forthcoming 2020/2021 coursing season”.

Double-speak seems to be endemic in many governments when it comes to finding ways to support blood sports. How a Minister can seriously say on the one hand that he recognises the “the welfare and conservation of a protected species” while on the other granting licences for their capture to be chased and mauled by dogs many times their size would be utterly bewildering were it not so commonplace for shooting and hunting lobbyists to be working closely with governments across the British Isles (see for example Natural England protects shoot from ‘disturbance‘).

More than 1,200 hares held for coursing released back into the wild

More than 1,200 hares, which had been held in captivity for future coursing meetings, have been released back into the wild, the Department of Housing, Local Government and Heritage has announced.

Clubs affiliated to the Irish Coursing Club had previously captured 1,270 hares for coursing activities. However, the activity has been suspended under Covid-19 Level 5 restrictions and the hares had remained in captivity since.

A statement from the Department said it formally requested the clubs to release all of the captive hares due to the importance of “the welfare and conservation of a protected species”.

The Department noted that by December 1st, the current duration of level 5 restrictions, the hares would have been held in captivity for at least six weeks, and in some cases for much longer.

It is also not clear at what point after December 1st it may be permissible for coursing to recommence, it added.

Minister Darragh O’Brien said hares are a protected species and are “better off being in the wild rather than being held in captivity in large groups”.

“There have been some claims that my intervention in seeking the release of hares would result in them being hunted illegally by others. It has been claimed that this measure will make it easier for illegal hunters, as they would now know the location of high numbers of hares,” he said.

“ I would point out that after every coursing meeting hares are released in any case, and these hares were in the wild until recent weeks. I see no reason why they should have been held for the duration that coursing was suspended.”

The Minister said that the National Parks and Wildlife Service and the gardai have made a number of prosecutions in relation to illegal hunting of hares in recent years.

“Finally, there have been a number of erroneous claims on social media that the National Park and Wildlife Service publish the release locations of hares by ICC clubs. That is absolutely not the case and such claims are misleading and designed solely to serve an agenda supporting the retention of the hares in continuing captivity,” he added.

Minister of State for Heritage and Electoral Reform, Malcolm Noonan, added that the recently-announced dedicated wildlife crime unit will ensure a “strategic and standardised approach to dealing with illegal persecution of wildlife”.

2 thoughts on “Ireland | 1,200 ‘protected’ hares held for coursing released into the wild” 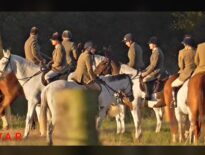 Blog Posts Hunts on the run
2