As we noted yesterday, the reverberations from the secretly-recorded Hunting Office webinars released by the Hunt Saboteurs Association in November continue to be felt. In a landmark decision Peterborough Council supported a motion to ban so-called ‘trail hunting’ on its land, stating that “This Council resolves to do everything within its legal powers to prevent trail hunting, exempt hunting, hound exercise and hunt meets on its land”.

And now Councillors at Cheshire West and Chester Council have backed a similar motion that paves the way for a ban, voting to devise a new policy reflecting the “damage” caused by so-called ‘trail hunting’ (why do we use that particular phrase: see Language Matters | Smokescreen/Trail Hunting).

The wording of last night’s Council motion is very interesting. It says:

“With a continual threat to the environment and on wild and domestic animals; to prevent potential illegal activity in breach of the Hunting Act 2004 and the Protection of Badgers Act 1992 and to prevent damage to other flora and fauna by hunts, their hounds, followers and objectors, this council asks cabinet to consider and develop a policy to clearly reflect this position with regard to trail hunting on council-owned land.”

Interesting because it is a wide-ranging condemnation of the damage that hunts, their hounds, and followers (most notably here this will mean thuggish terrier men) cause. So not just showing an awareness of illegal hunting, but a recognition of the numerous reports of hunts routinely (and illegally) blocking badger setts and their quad bikes causing damage to SSSis (as well as driving quad bikes and other vehicles on restricted byways and footpaths used regularly by the public).

In fact, to back up that interpretation, Matt Bryan, a Labour member of the council cabinet, is quoted in The Independent saying that incidents of badger sett blocking had been reported, as well as the pursuit of foxes by hounds, livestock worrying (including horses and pregnant ewes), and a hound killed on a road.

Despite lockdown, the League Against Cruel Sports (LACS) has documented multiple incidents in the Cheshire West area since August, including a report of a pet Labrador being attacked by 30 beagles, reports of suspected cub hunting (see Cubbing | An Autumn Sickness), and the whipping of a pony for refusing to cross a ditch.

No doubt many of these reports will have come via sabs and monitors active in the area (once again, what these brave pro-wildlife individuals are achieving is remarkable), but it is obvious from social media and online discussions that ‘the public’ are increasingly fed up with hunts rampaging through gardens, causing traffic accidents, blocking lanes, and – of course – killing wildlife.

In yet another out-of-touch and tone-deaf response form the Countryside Alliance, lobbyists for hunting to the bitter end, the organisation lamely asserted that as hunts don’t use much/any council land it makes little difference to them – they can in effect keep breaking the law elsewhere.

They know as well as we do that that is simply not the point here. Councils don’t take decisions like this lightly. They will have listened to lobbying from both sides and fitted in motions alongside far more high-profile issues like their coronavirus response, rising levels of poverty, and huge cuts to the funds they receive from the government. Yet they are evidently determined to do what they feel is right, and get rid of hunts and so-called ‘trail hunting’ where they can.

This is yet more evidence that what might have seemed acceptable a hundred years ago, is no longer acceptable in 2020. On Monday, Cherwell District Council in Oxfordshire will consider a temporary ban. That may be rejected, it may not, but there is no doubt at all that activists and campaigners are seeing a shift towards land-owning authorities, charities, and utilities finally recognising hunting’s cynical disregard of the Hunting Act and squeezing hunts into smaller and smaller areas (hopefully until they pop).

A concise ‘falling dominos’ themed tweet this morning from North Wales Hunt Sabs perhaps best sums up what the CA prefer not to publically acknowledge:

If you’d like to support this growing movement towards a better countryside, please let your own council know that you want the hunts banned as well. And why not consider joining LACS or the Hunt Sabs as a ‘feel-good’ Christmas present to our wildlife – or at the very least please let the Hunt Sabs know when you see hunts out and about breaking the law: 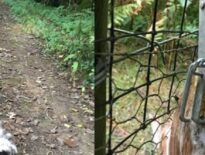 Blog Posts Shooting | The ‘I was set up’ script 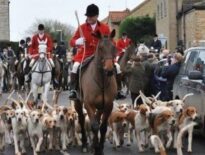