In support of our ‘Language Matters’ campaign, which looks at how language is used to influence how we all think about wildlife, we’re delighted to host a guest post from Dr Adam Cruise. Adam is an investigative environmental journalist, travel writer and academic. He has contributed to a number of international publications, including National Geographic and The Guardian, covering diverse topics from the plight of elephants, rhinos and lions in Africa to coral reef rejuvenation in Indonesia. Adam is a doctor of philosophy, specialising in animal and environmental ethics, and is the editor of the online Journal of African Elephants.

Dr Adam Cruise: The violence human language metes out to other animals

Human language is a powerful tool that can intensify biases towards ethnic groups, genders minorities and, of course, other animals.

This is something early feminist philosophers identified and endeavoured to reform, at least from a gender-specific perspective. Certainly, until the 1960s there was a widespread sexist attitude in Western society which found wide and enduring expression in linguistic conventions. Feminist philosophy has been effective in dismantling this attitude by discarding sexist aberrations in language. The main focus of feminists was to have society acknowledge the unconscious ways that language both silences and emphasises gender in negative ways. A major part of the language reform focused on when words or phrases make one gender, typically women, subjugated or invisible compared to the other.

The most popular examples are the pronoun ‘he’ or the word ‘man’ to refer to both genders taken together. These usages have become anachronistic thanks to feminist reform of language. Common usage of such descriptions where the gender is not clear, would always be referred to in the masculine. Feminist language philosophers have argued, therefore, that these words participate in rendering women invisible. The fact that the pronouns or words for the male gender can be also be used to refer to the female gender shows how maleness is dominant and femaleness is subjugated.

The same process of language reform needs to occur in order to tackle human dominance over other animals.

The biggest obstacle has to do with the word ‘animal’ itself. French philosopher, Jacques Derrida, was one of the first to highlight this particular problem:

“Animal is a word that men have given themselves the right to give. These humans are found giving it to themselves, this word, but as if they had received it as an inheritance. They are giving themselves the word in order to corral a large number of living beings within a single concept: “The Animal”, they say”.i

The word ‘animal’ has come to represent all beings that are not human, or it represents humans that act like wild animals (supposedly). The original Latin word is ‘animalus’, which means ‘having breath’. Humans also breathe. They too have flesh and participate in the world as every other living being does, but my computer’s dictionary shows how much we lie in using the word ‘animal’ (my highlighted points in italic):

• any such living organism other than a human being;

• a mammal, as opposed to a bird, reptile, fish, or insect: the snowfall seemed to have chased all birds, animals, and men indoors;

• a person whose behavior is regarded as devoid of human attributes or civilizing influences, esp. someone who is very cruel, violent, or repulsive: those men are animals — what they did to that boy was savage. ii

According to the dictionary, to be human is to be ‘un-animal’; to be animal is to be sub-human or inhumane. Animal traits are only ascribed to humans if they are seen as having aberrant behaviour. The online thesaurus similarly captures our usages of the term. Animals are described as:

To counter this, one can use the word ‘other animal’ or place brackets around the word (other) when referring to non-human animals. By doing this, one demonstrates that humans are animals too. Commonly, progressive writers attempting to avoid a human-centred (anthropocentric) discourse would use the term ‘non-human animal’ This, however, remains anthropocentric. The dualistic nature of the binary is retained, and the hierarchy enforced with the use of the negation or absence of the salient norm – human versus non-human.

In his defiance of the use of the word ‘animal’ Derrida wrote:

“I avoid speaking about animals in general, for me they are not ‘animals’. When one says ‘animals’, one has already started to not understand anything and has started to close the animal into a cage”.v

As Derrida points out, our use of the term is designed to lump all other animals into a class outside our own, to put them into a linguistic cage that excludes them from human hegemony. Human animals use derogatory words to entrench the hierarchical dichotomy and the word ‘animal’ is such a word. By removing the animal from the human, humans have successfully set themselves apart and above all other animals. Once it is accepted that humans are also animals, only then will there be a reconfiguration of our thoughts to accept we are just one species amongst hundreds of thousands.

As with masculine-centred language used against women, the use of pronouns weighs heavily against other animals. An individual animal in English is commonly referred to as ‘it’. Unless the relationship is personal, like a pet that has a name, then ‘he’ or ‘she’ is used when referring to the animal. This also applies to using ‘who’ and ‘whom.’ If the animal has a personal relationship with the person, then ‘who’ or ‘whom’ tends to be used. In most cases, though, the standard rule is exclusively to use ‘which’ or ‘that’.

This sort of language designates object or ‘thing-like’ status’ to animals. Other animals in our language are not to have feelings or emotions, or a subjective point of view. Due to this objectification in language, humans easily ignore the sentience and interests of other animals and a switch to seeing them as pure objects that may be utilised, is easily made.

Let us take trophy hunting as another example. Our language systematically hides the violence and destruction meted out on wild animals hunted as trophies.

Hunted animals are referred to as ‘game’, as if the activity was a sport, which, in fact, it is often described as. By using ‘game’ and ‘sport’ instead of ‘victim’ and ‘murder’ the language implies that there are two contestants in a game of equals pitted against each other. This may have been the case in prehistoric days when the only weapons the human hunter possessed were his bare hands, a sharp stick and some rocks to throw. Nowadays, with sophisticated long-range high-calibre weaponry complete with telescopic sights propped on the cross bar of an equally sophisticated vehicle with air-conditioning, it is a grossly one-sided contest, hardly worthy of being called a sport. Sport is also a form of entertainment, a source of amusement and pleasure, which may be true for the hunter but not so much for the hunted.

The objectification in hunting language continues. When a trophy-hunter shoots a wild animal, he ‘bags it’, he doesn’t say ‘murder her’ or even ‘kill her’. When we read about an animal’s ‘feelings’, they are normally written with quotation marks, as I have just done. ‘Game farms’ or ‘game ranches’ are euphemisms for ‘death camps’, ‘places of slaughter’ or ‘killing areas’ while ‘wildlife management’ should really be ‘promoting death’ or even ‘exploiting wild animals for slaughter’ or ‘for money’; ‘carcasses’ should be ‘corpses’ and, most significantly, ‘conservation’ simply ought to be ‘regulated killing’.

At a public stakeholder meeting at Kruger National Park in March 2017, park officials were attempting to justify their decision to cull (another euphemism for ‘killing’) a few hundred buffalo. In her attempt to explain that buffalo meat will cover some of the food-shortage needs of impoverished school children living alongside the park, the SANParks Social and Economic Scientist kept replacing the word ‘buffalo’ with ‘protein’. Her intention was to convince the assembled stakeholders to regard the value of the animal as a consumable entity rather than as a living being.

That is until I spoke up, stating: “I had seen a herd of hundred protein as I entered the park earlier today. The herd had dozens of newly born proteins and there was an old male protein with the largest horns I had seen.” It was only then that the assembly saw the folly of the term. The buffalo had been reduced from a great heaving phalanx of breathing, snorting, grazing, nurturing bodies of tough scarred hides and sweeping horns to a nitrogenous compound of long-chain molecules.

It is obvious, therefore, that language hides the violent intent that humans have toward other animals. To reduce other animals to molecular entities or objects in our descriptions of them is denying that animal’s true being and opens the door to a limitless exploitation and violence.

Adam Cruise edits the online Journal of African Elephants. The Journal was created by a group of concerned journalists and conservationists, who, after years of tracking and documenting the catastrophic decline of Africa’s elephant populations, have recognised the urgent need for a dedicated English news and commentary space to enhance and increase global awareness of the plight of Africa’s savanna and forest elephants. 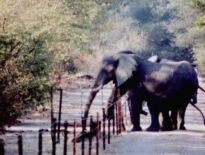 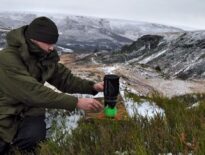