On Twitter today the Peterborough Hunt Saboteurs have linked to a Horse and Hound article written by Andrew Sallis, a Kimblewick hunt master. Mr Sallis is described by Horse and Hound as a ‘hunting columnist’. Not a writer about horses, or the countryside, or the joys of being out and about – about ‘hunting’. Fox hunting is of course illegal, yet hunting (which everyone and their dog knows refers to fox hunting) has an official ‘office’, it has a ‘hunting season’, and it has ‘columnists’ (and judging by what we’ve read there isn’t much required to be one of those except perhaps for a gift for hinting at the truth without actually shaking hands with it).

The thumbing of noses at the rest of us, especially during lockdown as fox hunting granted itself exemptions and decided that the rules only applied to the less self-important, has reached utterly ridiculous levels. How else to describe the fact that just days after Mr Sallis was filmed as part of the Kimblewick hunt that killed that fox on private property, he took to the pages of Horse and Hounds to tell everyone how joyous that very same ride out had been?

Andrew Sallis, incidentally, has previous as they say. A very well-written article by The Accidental Activist on More Than Just Badgers from November 2019 details the conviction of two Kimblewick terriermen for animal cruelty offences (they released a bagged fox in front of the hunt). In it the author writes that:

Before we cover further testimony of the expert witnesses we should hear about another witness whose identity is being withheld for security reasons. The witness had gone to the town square to see the hunt on the day in question. They noted there were about 30 riders and of course the hounds. It was here they overheard a conversation between Andrew Sallis (joint master and huntsman on the day in question as well columnist for Horse and Hound) and a hunt supporter. Sallis had told this supporter there will be a “fox out” Moreton way so that’s where they should go. Up to this point the witness believed that they would be seeing a genuine trail hunt. They saw the hunt leave and head towards Moreton.

Of course before the writs start flying, that’s not enough evidence to say that Andrew Sallis was part of a plan to hunt a bagged fox which led to two convictions of hunt terrier men for animal cruelty – but it is interesting, isn’t it…

And here he is again, shortly after being part of a hunt that allegedly ‘lost control’ of hounds that then killed a fox on private property at a time when hunting is under more scrutiny than in its entire history (see the Hunting Office webinars and Hunts on the Run) telling readers how great it all was in the pages of a hunting magazine. You have to wonder whether it is just a sense of arrogance, of entitlement, or being pretty damn sure that there will be no consequences that leads to an attitude like that? If we had to guess, our opinion would be a rather unpleasant brew of the three…

“I got 99 problems but… my hounds… ain’t one,” rapped Jay Z (sort of). After keeping a fit pack of hounds on ice for a month, last week’s release into the hunting field was glorious. On crisp mornings hounds had bounced down the road but despite their confusion at being “off games”, had kept themselves together beautifully.

Those of us who hunted hounds back in 2001 remember when hounds had to hit the ground running in mid-December, once the scourge of foot-and-mouth disease had finally been banished from the countryside, after snapping shut the previous season in February.

Hounds never cease to amaze; they have rebooted their season with a flourish. The ladies and gentlemen, just as eager to return to the hunting field in their legions, armed with fresh, giddy horses, galloped and jumped behind hounds until dark on Saturday, empty saddles and smiles aplenty; surely the best antidote to any lockdown blues.

Meanwhile if you’d like to support the Peterborough Hunt Sabs please click here or the image below: 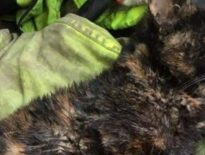 Blog Posts ‘Out of Control’ | Another pet killed … 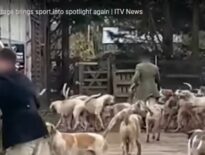