A recent tweet by the excellent Christine Hoxworth contained the image below quoting quiz show host and occasional actor Alexander Armstrong. We’re not sure when ‘Xander’ made his statement or where it was first published (though it seems to have come from a 2019 interview in Female First that has recently re-emerged on a number of blogs), but it is nonetheless absolutely emblematic of the way some shooters view the world. That us pro-wildlife types just don’t like them as individuals and if we could admit it and move on we’d all be in a happier place…

Now, we’re always aware at The War on Wildlife Project that we don’t have the authority to speak for any particular pro-wildlife side or group other than our own (though we have been around a lot of pro-wildlife folks for a very long time), but, ‘Xander’, you’re really missing the point. In our eyes, so-called ‘country sports’ is nothing more than killing birds and mammals for entertainment, birds and mammals that a great many of us cherish and love.

Shooters and hunters would love our loathing of your so-called ‘sport’ to be just about you, the individual. That would feed into the narrative that we are jealous, have class issues, just don’t understand the countryside or the people who visit it to shoot its wildlife. That we are just ‘antis’, who have never thought deeply about why we are so opposed to what you enjoy. You’re very wrong. The killing in the countryside is so normalised that we have had shooting and hunting shoved down our throats since we were children. Even now, years after fox hunting was made illegal, hunts parade down high streets on Boxing Day. Mainstream newspapers still try to sell the idea that the start of a season killing Red Grouse is ‘glorious’. If the gunshots heard in the countryside every single day were heard in a city instead there would be panic. We have thought and rationalised our way out of the norm, ‘Xander’. We remember the thought processes we have gone through. We have stood up to parents, peers, the media, verbal attacks on social media, and in some cases physical attacks in the field. You? You were raised by shooters, who perhaps were raised by shooters. Be honest now, is it you or us that has not been thinking deeply?

And talking about honesty, ‘Xander’, how about some honesty from you. What do you get from taking the life of an animal that just a second before was alive and vital? Have you ever actually thought about the pain you cause? About the millions of animals that die in traps and snares so you can enjoy your day out? The wildlife crime that underpins so much of the shooting industry? You say you grew up killing wildlife: do you know – have any idea at all – just how many lives you’ve ended? Does that matter to you? Does it matter at all that it matters to us?

We don’t know you, ‘Xander’, but you identify yourself as a shooter and we have seen statements like yours a thousand times, been ‘huntsplained’ to a thousand times, given that peculiarly patronising, supercilious down-the-nose look that says ‘Oh, poor you, you’ve never been shooting have you’ a thousand times. We know what’s behind your question, ‘Xander’, and you don’t get to imply that we’re dishonest or insincere when we have been nothing but honest and sincere about our love of wildlife while so-called ‘sportsmen’ hide their excitement of killing behind ludicrous claims of ‘respect for the quarry’, ‘conservation’, or ‘an understanding of the countryside’.

Like some more honesty? Well, okay. You are undoubtedly a fine quiz show host, ‘Xander’, you may be a generous and caring individual – but you kill wildlife for your own entertainment. You don’t apologise for that, and presumably you feel you have nothing to apologise for. But what you do when you pick up a gun and kill a wild animal is ugly and selfish and cruel, and no matter how good you are at feigning excitement as your guests’ answers tumble down from 100 towards zero for the millionth time there is no forgiving that. It will always colour what we think about you because we see it as self-centred, a deep flaw, a shameful lack of empathy for life that is already struggling under the massive weight of habitat loss, climate change, and – frankly – us. By ‘standing up’ for shooting and hunting it appears to us that you neither understand nor care about the life around you, and for an obviously intelligent man that is bewildering and unforgivable.

That honest enough for you, Mr Armstrong?

Botham declares war on the RSPB
Gamekeeping's war on wildlife
Yorkshire Water to change the way it manages its land
Animal Welfare and the General Election 2019
What do we do with a problem like Malta?
Fundraiser | Ban Bloodsports on Yorkshire's Moors
Countering the persecution of Peregrines
Pheasants | Mark Avery
Common Decency Seven Years On
What The Actual F(ire)

13 thoughts on “A quick note to Alexander Armstrong”

A quick note to Alexander… 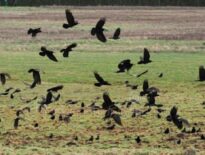 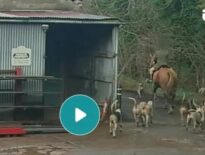