On December 24th horrific photos emerged from near Abingdon, Oxford of a fox dragging around a spring-loaded ‘gin trap’. The animal must have been in agony and in shock, and Oxfordshire Wildlife Rescue (OWR) spent the night with other concerned local residents looking for him/her so that they could remove it.

On the 25th (Christmas Day, of course) OWR announced that they had managed to catch the fox and a medical assessment was underway. Hours later the sad news came that after “a consultation with the Vets it was decided the appropriate course of action on this occasion was to put the fox to sleep due to the nature and condition of its injuries, health and prognosis of a decent recovery not possible. Part of our work is to relieve the pain and suffering towards animals, we are fully in agreement this was the best course of action and decision made.”

Traps like these – which have incredibly powerful metal spring jaws and cause significant injury and pain – have been banned for use in the UK since July 1958, when ‘hold’ traps were outlawed forcing gamekeepers to switch to so-called ‘humane’ instant kill traps. Unfortunately, though, it is still legal to sell these disgusting traps as ‘antiques’ for display purposes only, which means there are still plenty in circulation.

Whoever set this trap needs to be prosecuted. Finding out who that is, is of course not easy, but a fund has been set up by a member of OWR “for information leading to the capture/identity of the disgraceful person that committed this barbaric criminal act“. Perhaps a cash reward will help someone do the right thing…

The ‘go fund me’ appeal which is linked to here has been set up to add to that reward (and kudos to Christine Hoxworth for taking the initiative, and who says she did so because she hates animal abusers – which makes sense to us). 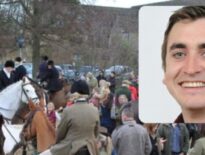