Snares are horrible things – steel nooses that are banned in many countries, but not here in the UK. Why would that be? Because the shooting industry uses them. Thousands upon thousands of them. They’re cheap to make, easy to use, light to carry, quickly replaced if you can’t quite remember where you left them. They’re basically an easy, low-skilled way to kill (or maim/injure) wildlife. And the shooting industry loves them.

The four UK administrations have separate legislation and codes of practice covering snaring. In Scotland, England and Wales, the main legislation is the Wildlife and Countryside Act 1981, and in Northern Ireland, the Wildlife Order (Northern Ireland) Order 1985. Scotland’s Wildlife and Natural Environment (Scotland) Act 2011 (the WANE Act) added extra legislation on eg training and attaching operator identification tags to all traps, but all legislation essentially says the same thing. Snares used in the UK to trap foxes should now be what are called ‘free running’ types, which means that rather than just strangling and suffocating an animal, the noose should relax when (or if) an animal stops struggling, or be fitted with a stop so that it can’t tighten beyond a certain point; or ‘break away’ types which have a weak link which is supposed to allow a larger, stronger non-target animal (like a badger) to break the noose and escape unharmed.

In reality of course, snares are not the ‘kindly uncle of traps’ that lobbyists would like us to believe.

Free-running snares can tangle or kink, meaning the noose can’t relax. It’s sometimes very difficult to tell some free-running types from self-locking types, anyway, and it’s often the simple placement of a bolt which determines whether the snare is free-running or (can be converted into) a self-locking one.

Non-target animals are still being caught of course, particularly Mountain Hares and badgers (as well as cats and dogs). Famously, even runners in the Peak District have been caught in them.

And while the industry may try to greenwash its use of snares and its considerations for animal welfare, wild animals – whether predator or prey animals – don’t behave passively under stressful conditions. Frightened, trapped animals will always try to escape. The internet is awash with images showing animals that have been almost cut in half by snares, that have died wrapped up in them, that – rather than sit and pass the time of day reflecting on how nice it is not to run around for a change – have tried to gnaw off their own limbs to escape them.

The following petition is aimed at securing a ban in Wales, but is open to all of us to sign. 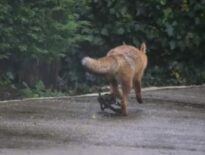 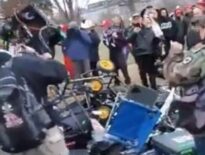