Today is being hailed as #MountainHareDay, the day that legislation comes into force in Scotland which should be a huge step forward in the protection of Mountain Hares – native wild animals, let’s not forget, that only needed protection because gamekeepers on Scotland’s grouse moors have been shooting so many of them (why? for the reasons they usually eradicate wildlife from the grouse moor farms of the uplands – to protect shooting profits).

As of today new regulations mean that it is illegal to intentionally kill, injure or take Mountain Hares without a licence. The ‘without a licence‘ clause is of course extremely important here. How easy it will be to get a licence and, crucially, how strictly Scottish Natural Heritage (SNH, the licence-issuers) will ensure that licence criteria are adhered to will be a vital measure of how seriously this legislation is taken. SNH have been liberally doling out licences to landowners to quash the country’s newly-established beaver population, so there is serious concern that they may be similarly open to any and all requests to kill hares. No doubt there will be some misuse along the way, but Scottish nature organisations will be watching to make sure that ‘licencing’ isn’t used to enable a box-ticking ‘on paper only’ exercise which allows the ridiculous slaughter to continue unabated.

However, cynicism aside, this is a fantastic achievement by a large number of people. Scottish Green MSP Alison Johnstone, in particular, has been key to protecting this iconic animal, and she is widely quoted saying:

“Today is an important moment for all those who campaigned for years to end the indiscriminate mass slaughter of mountain hares on Scotland’s grouse moors. These new protections come as a direct result of my amendment to wildlife laws last year, which forced the Government to act after years of delay.

Overwhelming public support for action ensured that Parliament supported this change, and I would like to express my gratitude in particular to the tens of thousands of campaigners who backed my amendment and helped push it over the line.

Now that mountain hares are a protected species, the Scottish Government has a responsibility to protect them. We will be keeping a close eye on them and will challenge any move that suggests they are not fulfilling this duty.

Scotland is in a nature emergency, with one in nine species at threat. The progress we are seeing today is important but we need to do so much more. The Scottish Greens are committed to fighting for Scotland’s nature, ending the persecution of our wildlife and restoring Scotland’s unique and beautiful natural environment.”

Scottish wildlife charity OneKind will be also keeping an eye on this iconic species. They sent out a press-release this morning which linked to an article in The National newspaper describing the new law (and which as of writing had solicited a comment which I’m sure many of us would entirely agree with – “I hope this law has teeth unlike the one protecting birds of prey being slaughtered by landowners who are not held to account.” Indeed…)

“We are delighted that the day has come when mountain hares have become a protected species and where the mass scale killings of this beautiful animal are put to an end.

“We have campaigned for four years for an end to these culls and so today really does feel like a huge triumph. A triumph not just for ourselves, but also for our passionate supporters and all those who campaigned tirelessly for mountain hares.

“There has been a great deal of support for making mountain hares a protected species and efforts from animal welfare organisations, such as OneKind, conservation organisations and passionate individuals made this happen.

“In particular, Alison Johnstone MSP deserves special recognition for her commitment to her role as the Scottish Parliament’s hare champion.

“We are very grateful that she lodged the amendment that is responsible for mountain hares’ new status as a protected species.”

Shooting estates have long fought against any protection for Mountain Hares, claiming variously that a) they’re plentiful, b) gamekeepers are the best people to look after them, and c) this is just another attack on shooting. None of which is true. In some areas of the country hares have almost disappeared. It’s the massive ‘culls’ (an essentially meaningless word in the context of Mountain Hares) by gamekeepers that has led to the huge public pressure, as Bob mentions above. And if it were an ‘attack on shooting’ it was launched by the shooting industry itself, which caused the public backlash by posting images of smirking keepers standing with piles of dead hares.

A typical shooting/gamekeeping own goal in other words, to be added to failure to deal with raptor persecution, the ongoing burning of uplands, inexcusable intransigence over the use of lead shot, the disgraceful online abuse of conservationists and campaigners by its supporters – and of course last week the Scottish Gamekeeper Association themselves piled into eight-year old primary schoolchildren who wrote to the Scottish parliament to thank them for the grouse moor licensing scheme as reported by Raptor Persecution UK 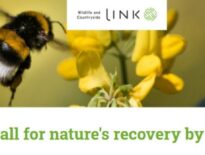 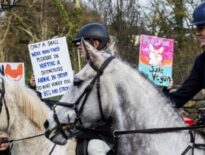