The world’s vulture populations (with the notable exception of Europe, where reintroduction programmes and partnership projects are bucking the global trend and seeing increases in all four breeding species) are in freefall. The Oriental White-backed Vulture (Gyps bengalensis) of India and southeast Asia, for example, was so abundant up until the 1980s that it was considered one of the most common large birds of prey in the world. Once numbering several million individuals, just a few decades later it was listed by the IUCN as Critically Endangered after an almost incomprehensible 99.9% decline. Less than 15,000 now exist. We’ve written about this crisis before (see – Dead and Dying | Old World Vultures 101) but in Asia especially vultures have been almost wiped out through the use of veterinary anti-inflammatory drugs like Diclofenac, which are routinely given to cattle. Vultures scavenging on the carcasses of cattle that have been recently treated with the drug, develop gout, kidney failure and die within just a few days.

Diclofenac was banned over a decade ago, but vets treating cattle in some of the remotest parts of the subcontinent quickly replaced it with a similar NSAID (Non-Steroidal Anti-Inflammatory Drug) Ketoprofen, which is also widely prescribed to people for pain management of rheumatoid arthritis. Unfortunately, Ketoprofen is also deadly to vultures.

Ketoprofen had become the main anti-inflammatory drug used by vets in Bangladesh, so the ban reported by SAVE (Saving Asia’s Vultures from Extinction) is a significant change. The companies affected by the ban are already apparently stepping up production and improving their formulations of a safe alternative, meloxicam.

The Cabinet of the Bangladesh Government, chaired by the Prime Minister, has taken a landmark decision, approving a national ban of production, sale and use of ketoprofen to safeguard the small remaining vulture populations in the country.

Bangladesh is the first country worldwide to ban any of the drugs now known to be toxic to vultures since the previous veterinary diclofenac bans more than ten years ago. Ketoprofen has become the main anti-inflammatory drug used by vets in the country, so this represents a significant change, and the companies concerned are already stepping up production and improving their formulations of the safe alternative drug, meloxicam.

Non-Steroidal Anti-Inflammatory Drugs (NSAIDs) including diclofenac and ketoprofen are the primary threats to the vultures of South Asia, including Bangladesh. These drugs were responsible for the catastrophic 99.9% declines of white-rumped vultures in the region. When these NSAIDs are administered to cattle, and if the cow or buffalo dies within a few days and is consumed by vultures, it causes gout, kidney failure and death in the following days .

Ketoprofen was first demonstrated to be toxic to vultures in trials carried out in South Africa over ten years ago. The first localised bans came in Bangladesh’s two gazetted Vulture Safe Zones (VSZs) in 2017, covering around one-third of the country. However, making this ban fully effective has been a challenge. Despite the bans and major awareness campaigns, the 2018 undercover pharmacy surveys conducted showed that 62% of veterinary drug suppliers still offer ketoprofen, and that’s only a 10% reduction from earlier. It has been difficult to control the drug supply into these areas while it remained legally available elsewhere in the country. Hence the countrywide banning of ketoprofen is such an important step. 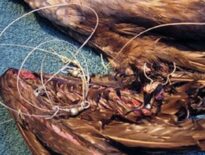