“In the current report, there are 28 species for which our best long-term trends show statistically significant population declines of greater than 50% over periods of 31–51 years…Many of the declining species are farmland and woodland specialists, and some of the alerts may therefore relate to common pressures in these habitats which are reflected in the negative trends for both habitats in the UK.“

The latest BirdTrends report from the BTO provides an early indication of one of the periodic revisions of the UK’s Red List (species with the highest conservation priority and needing urgent action) due to be published at the end of this year. Essentially, the report is a one-stop-shop for information about the population status of familiar breeding birds across the UK – a region already identified by a previous report as one of the most nature-depleted in the world. And it is very, very bad news indeed.

Many of the highlighted species would once have not only been familiar to pre-war generations, they would have been everyday companions. Prior to the industrialisation of agriculture, their pastures would have been flower-rich meadows with massive insect communities providing seeds and protein for countless Cuckoos, Corn Buntings, Lapwings and Grey Partridges. Our woodlands, now often neglected with (in the absence of apex predators) unsustainable numbers of Roe Deer, were once composed mainly of native tree species and edged by scrub. They would have been bursting with Nightingales, Willow Tits and Spotted Flycatchers. Many of us now go all year without even seeing a single individual of any of them.

Remember too that the declines in (especially) farmland species recorded by the BTO are of already diminished bird populations: these are further declines on the back of long-term declines. Compared with the wildlife the UK used to hold, we are living in an environmental desert.

Not that it will seem that way to many wildlife enthusiasts. Thanks to the phenomenon of what is termed ‘shifting baseline syndrome’, where changes in the environment, habitats, or populations go unnoticed because over time we forget how much has already changed and base ‘normality’ on what we are used to seeing, the lack of wildlife and of natural spaces seems normal to many of us. Our ‘baseline’ shifts with every generation, but whether we recognise it or not, we are in the midst of a biodiversity crisis. We have literally millions and millions of fewer birds around us than our grandparents. Our near-silent country would be almost alien to their grandparents.

The UK is not unique in this of course. All around the planet we are laying waste to wildlife. We know why, as well. A Report published last month by the independent policy institute Chatham House, ‘Food System Impacts on Biodiversity Loss‘, noted that biodiversity loss is accelerating around the world, and that “The global food system is the primary driver of this trend. Over the past 50 years, the conversion of natural ecosystems for crop production or pasture has been the principal cause of habitat loss, in turn reducing biodiversity” (see – The War on Wildlife | It’s time to talk food). Urbanisation, pollution and climate change have additionally caused the planet’s plants and animals to crash – a trend that has continued unabated within the last decade despite efforts to reverse the losses.

So what can we do? Simply speaking we need to make room for nature.

We need to allow natural processes back into the countryside not bleed it dry for our own ends. We need to restore native ecosystems to increase biodiversity (leading biologists have suggested that governments should protect a third of the oceans and land by 2030 ad half by 2050). And of course we need to farm in a less intensive and damaging way while accepting lower yields (organic yields – which use no fertilizers or pesticides – are on average still around 75% of those of intensive farming but far less harmful), and shifting to plant-based diets because cattle, sheep and other livestock have the biggest impact on the environment.

Plummeting bird populations may not seem all that important, but they are indications of a collapse in everything that they – and we – depend upon: a stable climate, clean air and water, functioning ecosystems. The UK media will no doubt largely ignore this new report from the BTO. Maybe if they renamed it ‘Warning – We’re All In Trouble!” it would gain more traction, but what do a few lost birds (and insects, mammals, and plants) matter when we have an economy to reboot and decisions to make about whether we can go to football matches again?

In the current report, there are 28 species for which our best long-term trends show statistically significant population declines of greater than 50% over periods of 31–51 years (see Latest long-term alerts).

Meadow Pipit has been added to this list in the current report as the 51-year decline is now greater than 50%; Little Grebe raised a formal alert in both the 2017 and 2019 reports but has been dropped from the list again this year as the trend is no longer statistically significant due to the wide confidence intervals around the estimates.

One further species shows a non-significant decline greater than 50% over a long timescale. Change for Lesser Spotted Woodpecker is non-significant over the longest period but only because data are sparse and monitoring ceased in 1999; a further strong decline has since been logged by Atlas data.

The steepest long-term populations declines we have measured are for Turtle Dove, Tree Sparrow, Nightingale, Grey Partridge, Willow Tit and Spotted Flycatcher, which have all declined by 90% or more since 1967, as, almost certainly, has Lesser Spotted Woodpecker. Turtle Dove shows the biggest decline of any species in this report (98%) and its rate of decline suggests it may soon disappear as a British breeding bird.

These 28 species that have halved in population size outweigh the 21 species found to show an equivalent increase, i.e. a doubling of population size, over similar periods. The gap between the numbers of species halving and doubling over the long-term has decreased by one species in this year’s report.

Except for Whitethroat, which has shown sustained, though still limited, recovery following considerable losses in the late 1960s, all but one of these rapidly declining species already benefit from listing as either red or amber Birds of Conservation Concern (PSoB/BoCC4). The other exception is the green-listed Greenfinch, which raises a high alert after a rapid decline in the last ten years, following a period of sustained population increases during the 1980s and 1990s.

Four species listed as amber after the 2015 review (BoCC4) arguably meet red-list criteria for breeding population decline: these are Redshank, House Martin, Willow Warbler and Meadow Pipit. Snipe, which is currently amber-listed though not for population decline, also arguably now meets red-list criteria, although it should be noted that the WBS/WBBS decline reported for this species is based on a small sample.

A further seven species raise lower-level concern, as a result of statistically significant long-term declines of between 25% and 50%. These are Common Sandpiper, Sedge Warbler, Song Thrush, Dipper, Dunnock, Grey Wagtail and Bullfinch. These species are already on the amber list on account of their population declines, except for Song Thrush and Grey Wagtail which are red listed, and Sedge Warbler which for now remains on the green list. Populations Common Sandpiper have been in recent decline, whereas the more sustained recent increases by Song Thrush, Dunnock and Bullfinch have been insufficient to fully reverse earlier declines. Numbers of Sedge Warbler and Grey Wagtail have fluctuated recently.

Two further species which do not raise alerts over the long-term (51-year) period have recorded statistically significant declines of between 25% and 50% over the 25-year period and hence also raise lower-level alerts. These are Oystercatcher and Tawny Owl.

In addition, Curlew (now red listed) has declined by more than 25% (as also shown by atlas data), but raises no formal long-term alert because the confidence intervals around its change estimates are too wide.

Three species with much shorter monitoring histories have also decreased by more than half during just a 23-year period. Two of these are already red listed (Wood Warbler and Whinchat), and the third is currently amber listed (Swift). Set against these three species are eight that have more than doubled over equivalent shorter periods (see Positive changes). In addition, Pied Flycatcher and Wheatear, which also have a shorter monitoring history, declined by between 25% and 50% over a 23-year period. The former species is currently red-listed whereas the latter is green-listed and shows a fluctuating trend over this period.

Many of the declining species are farmland and woodland specialists, and some of the alerts may therefore relate to common pressures in these habitats which are reflected in the negative trends for both habitats in the UK Biodiversity Indicators, although some farmland and woodland species may be subject to more specific issues which are detailed in the species accounts, for example the Greenfinch decline has been linked to trichomonasis disease. Four species commonly associated with urban habitats (Swift,  House Martin, Starling and House Sparrow) are also declining.

The full report, BirdTrends 2020: trends in numbers, breeding success and survival for UK breeding birds, can be downloaded form the BTO website at bto.org/our-science/publications/birdtrends/2020 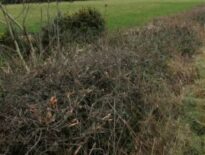 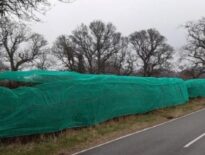