“Across the parched moors, now a tinderbox, all I can see is smoke.”

That’s a line from an article published in the Daily Mirror which heavily criticises the routine torching of one of the UK’s most precious habitats (and of course its rare plants and wildlife) simply so that a few people can blast living targets out of the sky. The article in the paper is well illustrated (while not all the images are connected with burning, they do all set the scene well) and actually reads like the personal experience it is, rather than the typical amalgam of press-releases re-written to produce a ‘balanced’ report that says little of interest. So kudos Nada Farhoud, the paper’s Environment Editor, for going on-site and seeing for herself the ecological and climate damage being wrought by the driven grouse shooting industry.

Much of what Nada writes is summed up in the following information box screenshotted from the article. Despite government ‘pressure’ (of the lightest touch) to cut back on fires, more are being set than ever before. Grouse moors are increasingly little more than single-species farming operations, heavily dependent on antibiotics and massive trapping and snaring of native mammals to rear grouse in ever-higher densities. The cost of grouse shooting – despite industry claims – puts it well out the reach of anyone but the well-heeled with enough spare cash to spend a day in some of our most important areas killing our wildlife. And the downstream air pollution is real, calculable, and dangerous. A focus on the ongoing persecution of birds of prey would have rubbed salt into shooting’s wounds, but any casual Mirror reader will have got the message clearly enough: grouse shooting is bad for the environment and contributes to the climate crisis…

The shooting industry will hate the article, and given the ferocity that lobbyists have been going after anyone who dares to question their version of ‘burning is conservation‘ or ‘burning is best for the environment‘ or ‘without burning there’d be no Curlews left on the planet’, Nada’s inbox is no doubt being flooded with emails slamming her. And given the disgusting abuse meted out to Raptor Persecution UK’s Ruth Tingay by shooters defending their ludicrous worldview, no doubt those emails will contain some deeply unpleasant and offensive sentiments.

Those attacks are being ramped up, of course, because shooting knows it can longer rationally defend the slaughter of so much wildlife, the climate change impacts, the cost of cleaning drinking water, the wildlife crime that underpins the entire fetid industry, and the rantings of its more disturbed supporters. Backed into a corner (of their own making) they have resorted to snarling and lashing out. Which might appeal to the baser instincts of its most partisan advocates, but will do nothing at all to convince the neutral observer to support them…

Burning Britain’s moorland an environmental disaster like ‘cutting down rainforest’

Standing on a windswept hillside in North Yorkshire, I am witnessing what conservationists are calling England’s equivalent to the burning of the rainforests.

The ground beneath my feet, once lush heather, has turned to dust and my jeans are covered in flecks of charcoal-like remains.

Across the parched moors, now a tinderbox, all I can see is smoke.

In the idyllic villages nearby a battle is raging. Campaigners say setting fire to the vital peatlands is creating an ecological disaster which also increases the risk of flooding and wildfires.

Gamekeepers claim the practice of regularly burning the heather on the moors to encourage new shoots, which red grouse feed on, is a harmless way of boosting the bird population for an industry that is estimated to be worth £67m a year.

Peatlands may not be as glamorous as forests but scientists say they suck more far more carbon dioxide (CO2), a greenhouse gas, out of the atmosphere.

They occupy about 12% of the UK’s land area and store 3.2bn tonnes of carbon, over half of the entire country’s current storage. These places also support rare species and help to provide clean drinking water.

But when these waterlogged bogs, one of our key natural solutions to fighting the climate emergency, are set alight, they become part of the problem by giving off the stored carbon as CO2 when they dry out.

In January, the Government announced a strategy to clamp down on burning peat in England, outlining plans to ban it at legally-protected sites or deep peat bogs.

But green groups which make up the Wildlife and Countryside Link, a coalition of 57 organisations, say the ban leaves nearly 70 percent of upland peat areas, including the entire North York Moors National Park, in England unprotected and if destroyed will release millions of tons of carbon into the atmosphere.

Not only does this directly contribute to the climate crisis, campaigners warn how the fires degrade the remaining peat making it poorer for wildlife and less able to slow the flow of water which increases the risk of flooding to nearby communities.

Hebden Bridge, in West Yorkshire, which has been flooded six times in five years, is downstream from several grouse moors. 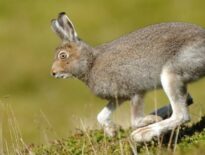