Lockdown, we’re told. has helped us appreciate our gardens. Stuck in our homes we have turned to staring longingly out of the window, grateful for glimpses of colour as birds like Greenfinches and Great Tits flit over our fences in a kaleidoscope of feathers…

Will that last? It would be wonderful if the UK’s collective focus on the birds that do their best to survive alongside us had become permanent, and there will be no more complaints about gulls waking us up at dawn; hedges will be allowed to fill out and resonate with birdsong; and we won’t be spraying our lawns with chemicals that are many times more toxic than DDT…But there is a clamour to get ‘back to normality’ and we have a sneaking suspicion that once the pandemic is behind us our thoughts will move on too…

Which will be a huge shame, because it’s not just farmland, upland, woodland and wetland birds that are in trouble – according to the results from the RSPB’s Big Garden Birdwatch (BGBW), the more or less official national garden bird survey, so are our garden birds.

First, though, the good news from the BGBW: more than a million people spent some time counting their garden birds on the last weekend in January in 2021 – double the figure for the previous year. That may of course be because of lockdown, but hopefully this year’s boom will become habit for families across the country. The BGBW is fun (and inexpensive) after all, and while adults may have lost some of their sense of curiosity, children can be inspired into a lifetime of enjoyment and learning just by being introduced to the wonders of a Wren’s song (‘How can a small bird make that much noise?’) or the startling, brilliant flashes of amber in a Goldfinch’s wing. And it’s all there, right outside our windows…

At least, it was. This is the War on Wildlife Project after all, and we don’t tend to sugarcoat biodiversity loss. And the fact is that sixteen of the most commonly reported twenty species of garden bird have declined in number since last year’s survey. A snapshot like this might not be an entirely accurate summary of the state of garden birds in the winter of 2021, but the long-term nature of the BGBW does help to illustrate trends, and unfortunately the health of our garden bird populations is not good.

For example, while House Sparrows still take the top spot in the BGBW, this once most familiar of garden (and farmland) birds has declined by nearly 71% since 1977 and is now Red Listed as a species of high conservation concern here in the UK. A combination of the reduction in the availability of food, loss of nesting sites, and cat predation are thought to be the cause.

Blue Tits were the second most common bird recorded, seen in three-quarters of all gardens, while Starlings dropped from second to third place. Starlings are a very interesting case actually. Numbers of this once numerous bird have fallen a staggering 83% since 1979, and like House Sparrows they are now Red Listed here – something almost inconceivable to birdwatchers growing up in the 1970s and 1980s. Decreasing chick survival rates are likely to be responsible for the decline.

The timing of the BGBW may actually be skewing numbers upwards (ie the picture here may be even worse than suggested) as the Starlings that visit our garden during the winter are not just local birds. Millions visit the UK from further east in Europe where the winters get too hard for them to remain. They don’t return to the Continent until the beginning of March, long after the Big Garden Birdwatch.

Along with House Sparrows and Starling, Greenfinches (almost decimated in the last fifteen years by Trichomonosis) and Chaffinches continued to decline, recording their lowest averages since Big Garden Birdwatch began in 1979. A BTO report in 2020 noted that the breeding population of Chaffinches had dropped by 1.15 million pairs since 2013, with scientists unable to explain why.

Goldfinch and Collared Dove, which have both done well in the BGBW in recent years, also declined compared with 2020, with only Robins, Blackbirds, Carrion Crows and the Song Thrush showing an increase on last year. While that latter observation would seem a welcome rebound for Song Thrushes – which all but disappeared from gardens across the UK in the last half-century – its numbers are still down 78% since the first count in 1979.

Why, though, are garden birds declining? The BGBW doesn’t go into speculative details about this specific survey, but the causes are fairly well-established: our gardens and the walls of our homes are not the ‘mini nature reserves’ many of us think they are. We have driven the ‘wild’ out of our gardens with a national obsession for tidiness (which let’s face it has been driven by a plethora of ‘home improvement’ and gardening programmes that told us all to tidy up, straighten out natural shapes, repair nooks and crannies, and always – always – fight back against wild flowers in our lawns). To put it prosaically, there is nothing to eat and nowhere to nest. And of course the survivors are having to escape an ever-increasing army of cats – over 12 million at the last count.

Looking again at some of the big losers in the BGBW, it’s clear that our gardens are no longer fit for most of them. The non-specialists which will eat anything, like Wood Pigeons and some corvids, are doing fine, but birds like Song Thrushes disappeared as our garden were emptied of snails as we scattered slug pellets across flower birders. Modern homes don’t provide room for birds like House Sparrows to nest in forests of ivy or in roof spaces. We routinely now turn to herbicides and pesticides, incredibly powerful toxins that were unavailable to gardeners until the 1970s.but that are routinely sold in garden centres and supermarkets.

The fact that so many people took part in BGBW, though, does offer an opportunity for our birds. Interest in our wildlife is growing, and you have to think that more people will want to see how ‘ their’ birds did in the result tables. That should lead to them learning of the issues that are leading to decline.

And some of these issues we can tackle quite simply. More people than ever before are putting food out in the winter for birds, which helps them through the ‘hungry gap’ – that period before Spring when natural food resources are at their lowest. It takes very little effort to allow a hedge to go a bit wild or to leave patches of our lawns in a more natural state, which will provide both seeds and insects for young birds. We can provide next boxes or somewhere safe for birds to nest.

As many of us have discovered during lockdown, birds are a joy, a distraction from whatever ails us, a natural remedy to modern life – and just as importantly they have every right to exist outside of any benefit to us anyway. To thrive rather than decline. To live their lives alongside us rather than be dominated by us.

We may not be able to turn the BGBW results around immediately, but actions add up of course. If we all did just a little bit for our local birds it could make a huge difference nationally.

As the BGBW survey might say, every individual counts – and that applies to us just as much as it does to the birds…. 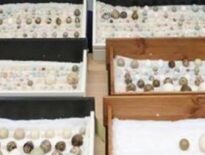