We’ve written a fair bit about our love for – and the importance of – insects on this site. Their populations are collapsing globally though, and while we may not be able to do much about the over-use of pesticides by the agricultural industry, if we’re lucky enough to have a garden we can at least do something to look after the insects that live right next to us.

Which brings us to bee-flies.

Every spring a strange, fast-flying insect makes an appearance in gardens all over southern Britain, triggering a flurry of online identification requests and letters to newspapers.

Buzzing like a bee with patterned wings, furry bodies, and stilt-like legs it has a distinctive – and quite fearsome-looking – long straight ‘spike’ sticking out in front that looks for all the world like a weapon. Whatever it is, this is surely an insect to be avoided at all costs – or sprayed into oblivion in case it sends the kids to hospital…

Despite wild imaginings though, these small creatures are absolutely harmless (unless you’re a solitary bee larva, which we explain below). They are bee-flies, and that ‘spike’ is just its proboscis, a sort of rigid drinking-straw for supping on nectar at the bases of spring flowers like Grape Hyacinths and Primroses. From personal observation it’s clear that they also move pollen around while they’re feeding (there are grains of pollen on the proboscis of one of the Dotted Bee-flies in the image below).

bee-flies have no stings or biting parts. They don’t spread disease. They’re much more likely to try to avoid us then approach us. There is nothing whatsoever about these distinctive insects that we should be concerned about (unless you’re reading this and are in fact a solitary bee larva, which seems highly unlikely for obvious reasons).

So what are they? They’re not ‘bees’ of any sort – that part of the name came about because they sound and look a little like bumblebees: they are highly-adapted flies. Nine species have been recorded in the UK, but the majority are very localised and scarce. We’re lucky enough to get two species in our garden: the Dark-edged (or Large) Bee fly Bombylius major and the Dotted Bee-fly Bombylius discolor (both are named after the markings on the wings).

The Dark-edged tends to emerge a week or so earlier than the Dotted where we are, in late March – often taking advantage of the Primroses that are in flower by then. The Dark-edged Bee-fly is a relatively common species in lowland England and Wales (with fewer numbers in Scotland) but the Dotted is listed as Nationally Scarce and a UK Biodiversity Action Plan (UK BAP) priority species. It’s largely confined to southern England and a few scattered sites in the most southerly parts of Wales. We tend to find them in the second week of April. By the end of May/the first week of June, both will be gone for another year…

So, they’re short-lived, harmless, rather beautiful (eye of the beholder, notwithstanding), and important pollinators. What’s not to love…unless etc etc

Ah, yes, solitary bees. Around 250 species of solitary bee have been recorded in the UK, most of them going harmlessly about their business almost entirely unnoticed. A small number of Andrena solitary bees – including Ashy and Tawny Mining Bees – commonly nest in lawns, producing tiny volcanoes of soil as they dig out somewhere to lay their eggs.

It’s these nests that both our bee-flies are looking for as they scan back and forth low over the grass, because bee-flies are parasitoids (insects whose larvae develop on or in the bodies of other insects, which they eventually kill). Gravid female bee-flies flick their eggs at suitable solitary bee nests whilst hovering over them. The bee-fly larvae hatch and then seek out the burrows of their hosts, developing as parasites on the exterior surface of a solitary bee grub.

It’s a fascinating if slightly grim lifestyle. But it’s one that’s been played out in rough grassland for thousands of years, and neither mining bee species seems to have been adversely impacted.

Certainly less adversely impacted than spraying insecticides and herbicides, cutting lawns down to the bare soil, or deliberate killing.

All completely unnecessary actions for most of us, and any of them likely to remove mining bees and an intriguing insect that despite appearances is just a harmless fly (unless, of course – well, you know the rest by now…)

Bee-fly Watch is now into its sixth year, following another record-breaking year in 2020, when the combination of a very sunny spring and people seeking out wildlife during the first covid lockdown resulted in a big increase in records. Bee-flies are distinctive furry flies that are usually on the wing from late February or March to June, often hovering over flowers and using their long ‘nose’ (proboscis) to feed on nectar. Once again we [the Dipterist’s Forum] are asking people to look out for bee-flies and add your records to iRecord. 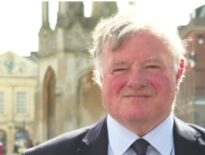