Does it matter who is your local Police and Crime Commissioner PCC)? Wildlife and Countryside LINK clearly thinks so – and we agree.

Wildlife and Countryside LINK (often referred to as just LINK) is the largest environment and wildlife coalition in England, bringing together fifty-eight organisations that work for the protection of nature (there are also LINK groups in Wales and Scotland). The Wildlife Crime Working Group is one of LINK’s sub-groups and they have written to all of the PCC candidates inviting them to state whether they will commit to help end widlife crime – or at least make tackling wildlife crime a priority.

And they need to as wildlife crime is rampant across the UK. How might PCCs impact wildlife crime though? Every police force area is represented by a PCC, except Greater Manchester and London where PCC responsibilities lie with the Mayor, and they are intended to “bring a public voice to policing“. While a PCC can not (or should not) be telling the police how to do their job (the enforcement of laws passed by Parliament), they do have responsibilities that include setting out a force’s strategy and policing priorities through the Police and Crime Plan. They can also appoint chief constables and dismiss them when necessary. That can give PCCs a huge amount of influence over ‘direction of travel’. Were that influence brought to bear on eg raptor persecution and so-called ‘trail hunting’ (a smokescreen for illegal fox hunting) it could make a huge difference to our wildlife.

There is a parallel problem that PCCs need to tackle. It’s not just how many crimes are being committed, but the fact that wildlife criminals know they will get away with it. As LINK states, despite hundreds of crimes being committed in 2019 a vanishingly small number of people were convicted. That is partly because wildlife legislation has been watered down so much it is extremely difficult to bring an individual to court on wildlife crime charges (see – Why is it so hard to prosecute wildlife crime?), and partly because wildlife crime is lumped under a much wider ‘rural crime’ brief which focusses limited police resources on tackling farm machinery and livestock theft rather than raptor persecution, hare coursing or illegal foxhunting. An additional issue has also always been, as LINK points out above, lack of proper training and the odd fact that wildlife crimes are not notifiable – meaning that police forces are not required to inform the Home Office, who collate reports to compile the crime statistics used by forces to decide where to concentrate staff and spending. Were they notifiable police forces might no longer be able to ignore just how widespread and serious a problem wildlife crimes within their areas really are.

By deciding where to spend our tax money, increasing specific wildlife crime training, and pushing for wildlife crime per se to be taken far more seriously, PCCs could therefore have a significant impact on wildlife crime.

But they need to be elected first. As we’ve been detailing in a number of posts, the electorate has largely been fairly apathetic when it comes to electing PCCs. Turnout in 2016 (the last time elections were held) was under 30%. This statistic has an upside though: even a small increase in voter numbers could have a very real effect.

It’s not just the pro-wildlife side that realises that of course. In January this year leaked documents from April 2020 indicated that the pro-hunting lobbyist group Vote OK was seeking to influence the elections, presumably hoping that pro-hunt PCCs would turn a blind eye to illegal hunts while vowing (as has former huntmaster and Wiltshire Conservative PCC candidate Jonathon Seed) to go after anyone attempting to interfere with legal countryside activities – easily interpreted as an intention to crack down hard on monitors and sabs. Which is ironic given that monitors and sabs are helping to keep wildlife crime numbers down by preventing crime being committed in the first place!

It’s unlikely that voter turnout will increase on May 6th, when our next PCCs will be chosen. That means that every vote really will count.

Information on the candidates is now widely available. Please, if you value our wildlife make sure you know what your local candidates stand for and what they are likely to do if they’re put into power.

Blog Posts What do multi-agency searches for raptor poisoners… 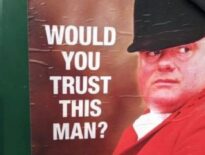 Blog Posts Jonathon Seed | Now appearing on posters near you&…
0