You may remember being told to try to always see the good in people. Apparently it’ll be in there somewhere if you look hard enough. If you see the best in everyone, you will be happier and you’ll make others happier too, according to various vacuous online ‘goodness gurus’. Seriously, let’s be honest here: some people are just too far gone for any of that to apply. Just how deep, for example, would you have to dig to find any scrap of goodness in someone who deliberately takes a chainsaw to a nesting platform built for one of our rarest birds – a species that some of the hardest working and innovative conservationists in the country have dedicated substantial portions of their lives to bringing back to the UK, that tourists from Scotland to Wales, from Rutland water to Poole Harbour have thrilled to, that were wiped out by ignorance, greed, and exploitation and are only just now beginning to slowly recover their numbers.

No, there really can’t be any goodness in a man (and it will be a man) who takes a boat onto a lake under cover of drakness and commits a crime that will be breaking the hearts of every volunteer, researcher, and scientist who has worked so extraordinarily hard to bring the Osprey back to its former home.

Why would anyone do this?The tweet below from the North Wales Police Rural Crime Team hints that they have an idea of motive, and it almost certainly lies in that word ‘lake’. And Llyn Brenig is not just any lake. It’s actually a renowned reservoir that in 1990 was the only Welsh reservoir used for the World Fly Fishing Championships. And of course Ospreys are ‘obligate piscivores’ – ie, they eat fish and nothing but fish. And there are some anglers and fisheries that just do not want any bloody bird of prey stealing ‘their’ fish.

Far-fetched? Actually killing wild birds to protect fisheries is commonplace. In response to queries about licences, Natural England admitted in a blog in 2019 that “Since 2014 we have issued over 1,500 licences to kill cormorants to protect fisheries in England.” Not to protect wildlife, note, to protect the profits of fisheries. Similarly Nature Scot say on their website that “We can grant licences to permit the killing or taking of wild birds to prevent serious damage to fisheries” (as far back as 2005 The Herald (Scotland) carried a report stating that “Over the past five years the Scottish Executive has allowed angling groups across the country to shoot 1626 goosanders, 625 cormorants and 281 mergansers in order to prevent them from eating salmon” and The Ferret published data in July 2019 stating that Nature Scot issued licences to kill 1560 Goosanders between 2014 – 2019). How about Wales? “Applications for licences to shoot cormorants Phalacrocorax carbo, goosanders Mergus merganser, herons Ardea cinerea, and red-breasted mergansers Mergus serrator, will be considered at any time. Normally any licence to be issued will be for a limited period between 1 September – 15th March.”

Killing fish-eating birds under licence really isn’t all that difficult then. The authorities won’t issue one to get rid of a nesting Osprey of course, but, hey, once you’re used to getting your own way it must be hard to resist taking a punt across the water and chainsawing the bloody thing off your lake anyway…

Brenig Osprey Project partners woke up this morning to the worst possible news. Last night 30/4/21 , at 21.42, someone took a chainsaw to the osprey nest and felled it. This is a fast-moving situation and we’ll issue more news of the birds when we can – please, please be kind to staff this weekend as we work out how to respond to this horrific act of vandalism.

For a start – if you have any information that can help us identifying the individuals responsible, please let us know or contact the police with crime reference 2059734.

One thought on “Wales | Osprey platform cut down” 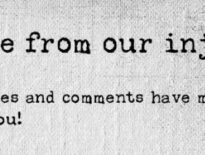 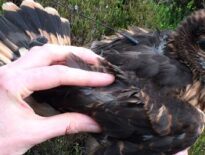 Blog Posts Yet another Hen Harrier disappears in ‘suspi…
1