Hot on the heels of the poisoned Golden Eagle found dead next to a baited Mountain Hare on the notorious Invercauld Estate, news has broken that Shropshire’s Peregrine Poisoners have been killing again. Peregrine falcons have been poisoned – again – at Clee Hill and once again the poisoners tethered live pigeons smeared with poison as bait. Clee Hill (part of the Shropshire Hills AONB) is notorious for the persecution of Peregrines: two were found poisoned with Diazinon (an organophosphate insecticide, highly toxic to birds, fish and bees, used in products such as sheep dip) at the site in 2010, one in 2011, another in 2015, and a pair in 2017. Toxicology results on the 2017 birds also indicated the presence of bendiocarb, another regularly abused product. It was used to kill yet another Peregrine in the Peak District in 2020 and is a constituent of the infamous ‘Nidderdale Cocktail’.

Peregrine falcons are of course specifically protected under the Wildlife & Countryside Act 1981, and the maximum penalty for killing or deliberately injuring them is a fine of £5,000 and six months imprisonment. That appears to be no deterrent to the sort of criminal who simply refuse to accept Peregrines in the countryside – and that can range from so-called ‘pigeon fanciers’ (pigeon racers who have gone as far as setting up a ‘Raptor Alliance’ to campaign for weakening the laws protecting birds of prey) and shooting estates, some of which don’t bother themselves with democratic niceties like legislation and just kill raptors anyway.

There’s a very telling quote from the Shropshire Peregrine Group in the piece below: “We know who is responsible, and local people know who is responsible. I urge local residents of Clee Hill to call out the individuals responsible for these crimes, many of whom are well known in the area, and provide the police with information about their criminal activities which are bringing shame to the village.” Of course they do, just as shooting estates know damn well who’s poisoning Golden Eagles, shooting Hen Harriers, and destroying Peregrine nests. But proving it is incredibly difficult and takes co-operation and partnerships – something those shielding wildlife criminals still seem very reluctant to be a part of…

Rare birds of prey have been poisoned at a Shropshire beauty spot in the latest in a series of attacks by bird-killers whom wildlife campaigners say are bringing “shame” to the village of Clee Hill.

Shropshire Peregrine Group has issued a warning that dog walkers and animals could be at risk as a result of lingering toxin on the moorland at Titterstone Clee Hill.

“We are shocked that it’s happened again,” said John Turner, who chairs the group dedicated to the falcons which have been making a slow and fragile return to Shropshire.

“The deadly poison being used is a danger to people walking their dogs and to animals in the area and somehow we are going to have to inform Defra to get the place decontaminated as it should not be scattered in the countryside like it has been and is contaminating the moorland where these pigeons were found.

“On Wednesday evening another poisoned pigeon was found along with a dead fox which had eaten it.

Mr Turner said the latest attack targeted at Clee Hill’s only pair of nesting peregrines had happened on May 1. The pair had returned there in early April and was incubating a clutch of eggs.

He said: “It [the female peregrine] was found by the site warden on Saturday morning. There was the body of a poisoned pigeon very near the dead female peregrine. The male will have been killed as well but we have not recovered the body yet.

“We think this is a repeat of what happened four years ago in 2017. We thought we had put a stop to it. We have had at least a dozen peregrines poisoned since 2010 – we have lost about a quarter of the Shropshire population of about 40 peregrines.”

Mr Turner said the attack was a wildlife crime and there was a reward of £1,000 for information leading to the conviction of the culprits.

“The maximum penalty for killing or hurting a peregrine falcon is a fine of £5,000 or six months in prison,” he added.

“They use live pigeons as bait. They paint poison on the feathers, tie it to a stake, and put it near where the peregrines are nesting. In this case they tethered two pigeons in the area. It is a very slow, agonising death for the peregrines.

“It’s got to stop. It’s a disgraceful episode of wildlife crime and persecution of these birds of prey.”

Both West Mercia Police wildlife crime unit and the RSPB are investigating.

Mr Turner added: “The manner in which these killings are carried out points to the involvement of some individuals who are openly campaigning for the removal of peregrine falcons and other birds of prey from some areas of countryside. These killings are well planned and executed, using similar methods on each occasion.”

“If anyone has any information regarding this incident please contact the police on 101 and quote incident number 258i of 1 May 2021 or contact us via our ‘Tell us about’ section on our website.” 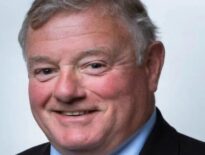 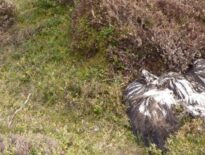