As of today, we’ve taken the decision to shutter The War on Wildlife Project. The Project was set up to ‘help tackle the war on wildlife’ and was always intended to be a hub, a network of guest posts and campaigns with associated podcasts. Since the launch of Off the Leash Podcasts six months ago, though, the focus has switched to that platform and it feels a much ‘better fit’ with a bigger audience whilst still dealing with the same issues and concerns. Rather than keep the War on Wildlife Project half alive and rarely updated (nothing looks worse than a supposedly campaigning website that isn’t actually doing anything!) it makes more sense to shutter it, take everything we’ve learned from an exciting eighteen months, and to put all efforts into building Off the Leash (which is a return to the audio roots that originally underpinned the Project).

This means that the War on Wildlife Project Facebook page will be taken down, the mailing list closed, and the Twitter account cancelled. There are a number of very interesting original and guest posts on the website though, especially those related to the badger cull, hunting and shooting, so the site will remain online and accessible for the foreseeable future.

Thankyou for the fantastic encouragement and support. This decision makes complete sense to us, and rest assured the fight for our precious wildlife and our battered environment will go on with the same passion and commitment over on Off the Leash. 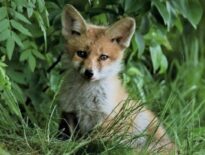