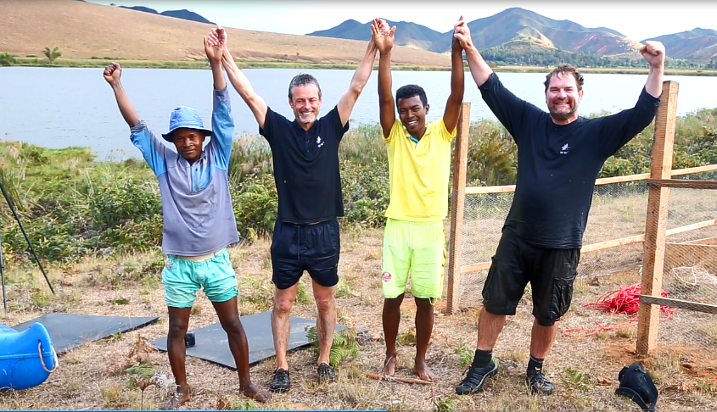 The Wildfowl and Wetlands Trust’s Peter Cranswick is a highly experienced waterfowl conservationist who has worked on a range of threatened species from Red-breasted and Lesser White-fronted Geese to the world’s rarest duck – the Madagascar Pochard.

In an earlier article on this site we looked at the history of the Madagascar Pochard and the reasons for its near-terminal decline. For this accompanying podcast Charlie Moores went to Slimbridge, WWT’s HQ, to talk with Peter about his work on the ground in northern Madagascar (with a team including his colleague, the renowned aviculturist Nigel Jarrett), and how the project changed from what he once described as “a hastily implemented rescue mission focused solely on a duck…into a genuinely holistic programme for wildlife and people“.

A Birdwatcher in Parliament with Sir John Randall (October 2019)

Sir John Randall was elected the Member of Parliament for Uxbridge in 1997. During his political career he firmly opposed the UK’s involvement in the Iraq War worked to tackle modern slavery, was a champion of marine conservation, fought to end the wild bird trade, and sat on the Environment, Transport and Regional Affairs Select Committee and its Environment Sub-Committee. He was – and still is – strongly against the expansion of Heathrow Airport. John stood down from the government after a reshuffle in 2013 and announced in 2014 that he would not stand for re-election.

Charlie Moores had the opportunity to chat with John in October 2019. It’s often difficult to work out exactly where to start a conversation with someone who has achieved so much in so many roles, but he remembered a far-sighted speech that John had given in 2015 asking Parliament for leave to introduce a Bill “to set biodiversity and other targets for 2040; to establish a Natural Capital Committee; to require local authorities to maintain local ecological network strategies; to identify species threatened with extinction; to make provision for access to high quality natural green space; and to include education about the natural environment in the curriculum for maintained schools.”

They covered a range of topics from whether lobbyists have too much power and seeing Kirtland’s Warbler as a conservation model to starting a new ‘Wild Party’, but that speech seemed a pretty good place to start….

Following a relatively short career as a vet, Gill Lewis took her love of wildlife and the natural world and became a strong and highly effective voice against wildlife persecution and environmental degradation. Now a multi-award-winning children’s author, her young heroes and heroines share the pages of her books with Moon Bears, gorillas, and – of particular interest – birds of prey. Her books about wildlife crime on grouse moors, Sky Dancer and Eagle Warrior, feature a Hen Harrier and a Golden Eagle respectively, and Gill creates wonderful tension between carefully-drawn characters, birds of prey, and the landscapes both find each other in.

Charlie Moores met up with Gill in a National Trust garden, not far from where the author herself grew up.

The Common Pheasant has become ubiquitous. They are everywhere, walking around fields or lying dead by the side of the road, painted on signs and cards or hanging by the throat in shop windows. Remarkably though, pheasants aren’t native to the UK: they’re introduced. Their original range was predominantly China and western Asia – they’re only here, and here in staggering numbers, because some people like to shoot them.

Charlie Moores spoke with renowned conservationist, author and birdwatcher Dr Mark Avery on the publication of an article he’d written for the prestigious monthly journal British Birds titled ‘The Common Pheasant – its status in the UK and the potential impacts of an abundant non-native’. In their discussion they covered a wide range of the issues that Mark raised in his article – from pheasant ecology to predators, lead shot and Lyme’s Disease – but Charlie began by asking him just how many pheasants are there in the UK…?

“We are going for this in the expectation that we will win…and it would be unfair to say what percentage our lawyers say is the chance of winning, but our lawyers say this is a very good case….”

Wild Justice is a not-for-profit company set up by three of the UK’s most renowned campaigners and conservationists: Dr Mark Avery, Chris Packham, and Dr Ruth Tingay. It launched on the 13th of February this year, with the aim of taking legal cases on behalf of wildlife against public bodies where they are failing to protect species and/or habitats. Legal action will be funded by public donations and crowdfunding appeals.

Charlie Moores went to meet Mark Avery to discuss the new organisation and why they’d chosen to start by mounting a legal challenge to the general licence, legislation which in the words of Wild Justice, has led to the casual killing of birds …but he began by asking him about the origins of Wild Justice: was he correct in supposing that as the three Directors and Carole Day from solicitors Leigh Day all worked together during the writing of ‘A People’s Manifesto for Wildlife’ last year, it had been then that talks about setting up what became Wild Justice had started…

Bob Elliot has had a long and illustrious career in conservation, working for a number of organisations including the National Trust for Scotland and the RSPB where he became a renowned Investigations Officer, a role he is rightly immensely proud of and where he recounts one of the first calls he ever received was from a member of the public who described seeing two large birds of prey lying dead on a grouse moor in northern Scotland.

As the Head of Investigations for the RSPB Bob went back onto grouse moors looking for dead birds of prey many times. He’s seen first hand the war being waged on our birds of prey and many of us in his position might have become embittered – tightly wound and unapproachable even – but as anyone who knows him will attest, Bob Elliot is an extremely genial, friendly and approachable man – unless, of course, you’re standing over a dead raptor with a bottle of carbofuran in your tweed jacket.

In 2018 Bob announced that he was leaving the RSPB to take up the role of Director of OneKind, a campaigning animal welfare charity based in Edinburgh. When I bumped into Bob at the People’s Walk for Wildlife in London in September I asked if we could talk for a podcast. ‘Let me get my feet under the table first’ he – quite understandably – replied, but just a few months later here we are, preparing to discuss wildlife crime investigation, golden eagles, the trophy hunting of goats in Scotland, Mountain Hares, OneKind, and what it’s like to move from Sandy to Scotland. Only, as Bob explains in answer to that particular question, he’s actually been in Scotland this whole time…

Lizzie Bruce is something of a high-flyer within the bird conservation world. From being a Conservation Intern at the RSPB just six years ago, she has already been the warden at Sandy, the RSPB’s headquarters in Bedfordshire, and is currently the RSPB’s NW Norfolk Reserves warden covering Titchwell Marsh and Snettisham reserves. She’s also on the committee of Spurn Bird Observatory and a director of British Birds magazine.

Charlie Moores met up with Lizzie in her office at Titchwell to discuss her career, her future plans, and what he assumed must have been a childhood love of birds that had simply grown and grown…

In 1991 the BTO (British Trust for Ornithology) moved to its current headquarters in a converted nunnery in Thetford, Norfolk in the east of England. The following year twenty-two year old Dawn Balmer started working at the Nunnery – and is still there today. She has worked on a wide range of census, fieldwork, ringing and online bird recording projects, was the Atlas Coordinator for the Bird Atlas 2007–11 project and is now Head of Surveys. She also represents BTO on the Rare Breeding Birds Panel, is on the British Ornithologists’ Union Records Committee, and on the Editorial Panel of British Birds magazine.

A conversation with Kevin Cox, Chair of the RSPB Council (October 2018)

A former magazine publisher – and if you read specialist-hobby magazines the chances are you’ll have read at least one magazine he either created or developed – Kevin Cox is the current Chair of the RSPB Council, the body tasked with ensuring the Society conducts its affairs in accordance with its Constitution (more of which in the interview) and within the law. Elected in October 2017, Kevin brought a wealth of experience to the position, including a previous stint on the RSPB Council, his role as Chair of Devon Birds, and twelve years on the board of the World Land Trust – as well as a tangible commitment to conservation, excellent communication skills, and a life long passion for birds.

In this interview Charlie Moores talks with Kevin about his commitment to conservation, publishing, and of course the RSPB – and in particular its ethical stance on predator control and its neutrality on shooting.

Dr Rob Sheldon has worked in nature conservation for almost 20 years, twelve of them with the RSPB (the Royal Society for the Protection of Birds). He’s worked on projects that have taken him to Kazakhstan and the United Arab Emirates, and worked for the Zoological Society of London as the Director of the King Khalid Wildlife Research Centre in Saudi Arabia. Since 2013, he has been the Chairman of OSME, the Ornithological Society of the Middle East, The Caucasus and Central Asia.

Charlie Moores met up with Rob to discuss his life in conservation and his new venture as a freelance conservation consultant.

Poole Harbour in Dorset is the site for a rather special conservation project aiming to create a breeding population of Ospreys by translocating chicks from Scotland.

Charlie Moores was on hand to witness the arrival of fourteen Osprey chicks, and talked with Paul Morton (Birds Of Poole Harbour), Tim Mackrill (Roy Dennis Wildlife Foundation), and Brittany Maxted (manager of the Poole Harbour Osprey Project) about the birds, how it felt handling such a ‘precious cargo’, and how the team avoid the chicks imprinting on them rather than on the local area. Thanks also to project partners Wildlife Windows, a Poole-based nature tech company. Photo: Tim Mackrill with one of the Osprey chicks (copyright Ruth Peacey)

Dr Tim Mackrill began volunteering at Rutland Water when still a teenager, and just as a project began to relocate Ospreys from the Scottish breeding population to Rutland. He became – in his own words – hooked on the birds, eventually leading the Ospreys Project at Rutland and completing his PhD (on Ospreys of course) in 2016. In June 2018 Tim launched a new initiative, the Osprey Leadership Foundation.

Charlie Moores went to the launch, and to chat with Tim about the Foundation and the species that has become the focus of his life’s work.

A conversation with painter and birder Derek Robertson (May 2018)

Charlie Moores talks with multi-award winning Scottish artist and birder Derek Robertson about his love for his native Scotland, the wildlife he has always been fascinated by, an important project he is still working on called Migrations, the disappearance of Fred the Golden Eagle from near Edinburgh, and the remarkable view from his studio on the banks of the Firth of Tay.

Charlie Moores talks with Martin Cade, the likeable and easy-going warden of Dorset’s Portland Bird Observatory, one of nineteen bird observatories around the UK, about how the famous ‘Lower Light’ became an observatory, his remarkably long career, and, of course – birds (starting with what appears to be the appearance of pheasants and the near disappearance of a once very common ‘Obs’ bird, the Greenfinch)…