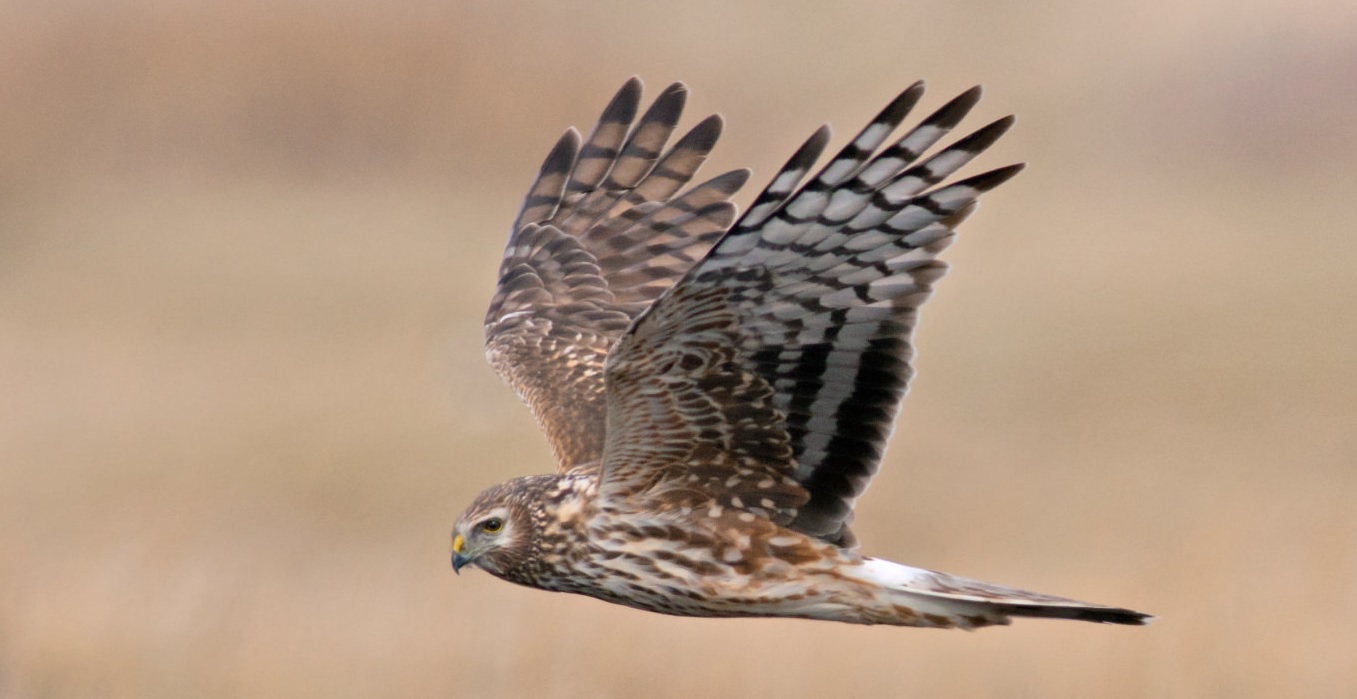 “The reality is that wildlife crime is very under-recorded largely because there is not a witness there to report an animal that has been illegally killed.” Ian Thomson, Head of Investigations RSPB Scotland February 2019

The RSPB’s Dr Cathleen Thomas, is Senior Project Manager of the EU-backed Hen Harrier Life Project. Launched in 2014 the project is nearing completion now, and Cathleen has been a remarkably dedicated spokesperson for Hen Harriers, a declining bird of prey that in the UK at least now breeds almost entirely on a handful of mainly upland moorland sites. Charlie Moores met up with Cathleen to discuss the report’s findings, the very low failure rate of satellite tags (something shooting lobbyists have always claimed is behind the ‘suspicious disappearances’ of so many tagged birds), to ask what impact the deaths of so many harriers has on her and her team, and find out what comes next – but he began by asking whether the project had intentionally set out to uncover the scale of persecution that Hen Harriers are facing…

“…what I’d like to think I can do in my tenure [as RPPDG Chair] is stop the organised element of raptor persecution – the hundreds and hundreds of raptors that are slaughtered each year linked to professional organisations – I’d like to think over my time in the chair I can stop that.”
Superintendent Nick Lyall – one of Bedfordshire’s most senior police officers – is a man on a mission to tackle raptor persecution. Nick is both Chair of the (once heavily criticised) Raptor Persecution Priority Delivery Group – a group of organisations run by the National Wildlife Crime Unit to stamp out the illegal killing of birds of prey – and the national lead for Operation Owl, an awareness-raising initiative, which builds on a successful blueprint introduced by North Yorkshire Police, the RSPB and the RSPCA.
So how did a police officer – with as Nick explains – next to no knowledge of raptor persecution get involved in the fight to tackle it and what does he hope to achieve? And as the police officer also overseeing fox hunting in his force area how does he view the local hunts and the local groups that monitor them?

“It’s just about making a difference…Day to day I sit here and say, how do we make a difference? What is it we have to do today that makes a difference for birds, and birds of prey in particular?”
A life long birdwatcher, Mark Thomas has been tackling wildlife crime for much of his career, investigating and taking to court cases involving egg collecting, nest disturbances, and the illegal killing of birds of prey, especially their killing on or around driven grouse moors. He was appointed Head of the RSPB Investigations Unit at the end of last year, and responds to the criticisms that at times the RSPB seems too close to the shooting industry with patience and robust but respectful argument.
Charlie Moores talked with Mark at The Lodge, the RSPB’s HQ, shortly before Hen Harrier Day 2019 and just days before the society’s Global Conservation Director, Martin Harper, posted a press release which stated that the RSPB had written to the government asking for an independent review on the sustainability of driven grouse moor management.

“The reality is that wildlife crime is very under-recorded largely because there is not a witness there to report an animal that has been illegally killed.”
Last year Chris Packham declared that there is a War on Wildlife in the UK, and conservationists and many scientists are convinced that there is indeed an ongoing war on our wildlife, especially where the targeting of birds of prey is concerned. It’s often said, though, that the first casualty of war is the truth. How serious are levels of wildlife crime and why is it such a fiercely contested issue? One person who knows all too well what is actually taking place in our countryside, particularly where wildlife crimes against birds of prey are concerned, is Ian Thomson, the Head of Investigations at RSPB Scotland. Charlie Moores spoke with Ian about his work to tackle raptor persecution on a visit to Scotland in February.

“We know that a number of these birds have vanished, and we know from the tags exactly where they’ve vanished – we know what the land use is on the ground where they’ve vanished – and what we’re basically doing here is putting pieces in the jigsaw and at the end of this project we’ll be able to look at it in its entirety and produce a scientific paper that shows exactly what has happened to our tagged harriers…”
The Hen Harrier, a protected species of bird of prey, routinely disappears in ‘suspicious circumstances’ around grouse moors – a pattern that’s becoming increasingly evident and impossible to dispute now that large numbers of Hen Harriers are being satellite-tagged, which means their movements can be accurately tracked. Charlie Moores talks with Mark Thomas, RSPB Investigations, and Dr Cathleen Thomas, the RSPB’s Hen Harrier Life Project Manager, about ‘disappearing’ Hen Harriers and the work the RSPB does to help the public understand more about these magnificent but hugely persecuted birds.

“The bizarre thing is that in Scotland these tags are twenty-five times more likely to fail suddenly and mysteriously than any other country in the world…” Wildlife persecution is a regrettable fact of life in parts of the countryside, particularly those areas managed for shooting. Much of it takes place just out of sight, but we can help tackle it if we know where to look and what to look out for.
In this podcast, recorded in Scotland in May 2018, Charlie Moores talks with Ian Thomson, Head of Investigations RSPB Scotland, about satellite-tags (used to monitor the movements of birds of prey), Fred (the young Golden Eagle that disappeared in highly suspicious circumstances in Edinburgh’s Pentland Hills), and tackling wildlife crime.

For many researchers and scientists interested in the breeding success of the Hen Harrier in England one government-backed ‘conservation’ solution has created more controversy than usual – the suggestion that some broods should be ‘managed’ or ‘meddled with on behalf of the grouse shooting industry’ as a wide tranche of conservationists might describe it.
Dr Mark Avery, one of the most influential conservationists and writers in the country, recently launched a fundraiser to bring about a judicial review of the licencing of hen harrier brood meddling. Charlie Moores went to see Mark to discuss why he’d gone down this track and just what the funds raised would be used for.

On the Frontline with Committee Against Bird Slaughter (February 2018)

“Is it far worse in the Lebanon? In really simple terms it’s like nothing I’ve ever seen in my life.”
Komitee gegen den Vogelmord (Committee Against Bird Slaughter as it’s known in English) – or CABS – is a German-based organisation founded to tackle illegal poaching and trapping of birds across Europe. Last year, working with SPNL, the Birdlife partner in Lebanon, CABS sent its first teams into the firing line to understand what was happening to migratory birds on a key part of the African-Eurasian Flyway. What they witnessed in Lebanon shook even experienced staff.
Charlie Moores talks with Axel Hirschfeld and Lloyd Scott about the origins of CABS and perhaps its greatest challenge yet. Photo credit James Hogg: Geraldine Mo, Axel Hirschfeld, and Lloyd Scott at Eghbe, Mount Lebanon with illegally shot birds of prey (used with permission)

How do you go from working at Battersea Dogs Home to doing a PhD in Madagascar on an endemic fish eagle? Or working at Heathrow Airport to wearing a Hen Harrier suit and writing for one of the most important blogs on raptor persecution (Raptor Persecution UK) on the internet?
Charlie Moores persuades one of his personal heroes to slow down long enough to tell him all.

In a series of short interviews recorded at Arne RSPB, during Hen Harrier Day 2017, Charlie Moores talks with Jeff Knott (Head of Nature Policy at the RSPB), Paul Morton (co-founder of the charity Birds of Poole Harbour), Gill Lewis (award-winning author whose books include ‘Skydancer’ and ‘Eagle Warrior’), Chris Packham (Naturalist and Presenter), and Mark Constantine (Lush co-founder and campaigner) about Hen Harriers and wildlife crime.

The Committee Against Bird Slaughter, or CABS, was founded in Berlin in 1975 by a small group of birders concerned by the scale of illegal bird trapping in and around the Mediterranean. The group’s strategy has developed over the years but has always focussed on being on the ground during peak migration periods and intervening wherever possible to save birds.
Charlie Moores talked with two members of CABS, Andrea Rutigliano (pictured above) and Craig Redmond, at the Lush Summit in February 2017 about the organisation and about the terrible situation on the popular tourist island of Cyprus where hundreds of thousands of birds are being illegally trapped every year.