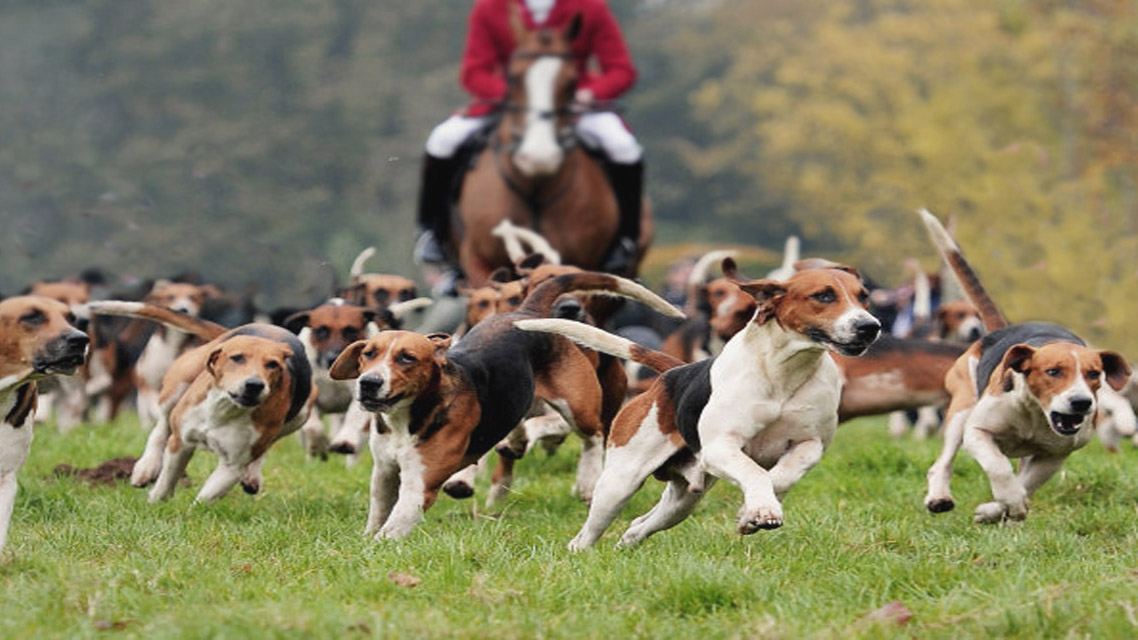 The hunting of wild mammals (including foxes, deer, hares, otters and mink) with hounds was made illegal in England and Wales by the passing of The Hunting Act 2004. The Act came into force on 18 February 2005. The pursuit of foxes with hounds, other than to flush out to be shot, had been banned in Scotland two years earlier by the Protection of Wild Mammals (Scotland) Act 2002. The Act does not apply in Northern Ireland. The Act does not cover the use of dogs in the process of flushing out an unidentified wild mammal, nor does it affect drag hunting, a legal and well-established activity where hounds follow an artificial scent.

Despite the passing of the Act, and overwhelming public support for it, fox hunting, in particular, has continued much as before, with hunts bypassing the law by claiming to follow ‘trails’ – scent-based trails based on fox urine. Monitors say that only in very rare cases are trails ever laid, and hunts are simply doing what they can as they wait for the Hunting Act to be repealed.

On the 19th of October 2019 the National Trust held its Annual General Meeting (or AGM) in Swindon in the west of England. Delegates arriving at the venue were met by (polite) protestors asking the Trust to look again at a highly controversial decision made at their AGM in 2017. A motion proposed that year to ban the licencing of ‘trail hunting’ on National Trust land had been endorsed by 28,629 votes with 27,525 against, but had been defeated after the addition of 3,460 proxy votes cast by the Trust’s chair who had effectively ruled in favour of the hunts. Under the Trust’s rules, a similar motion can not be brought to the AGM again for three years (so in 2020), but what is ‘trail hunting’ and why does it matter if the National Trust supports it anyway?

In the following podcast, campaigners and protestors (along with one anti-hunt and one pro-hunt National Trust delegate) talk about so-called ‘trail hunting’ and explain what is being done to put pressure on the Trust to stop issuing licences for it at its 2020 AGM.

Hunting with hounds was made illegal when the Hunting Act came into force in 2005. Which sadly doesn’t mean that hunting with hounds has gone away. There are still many active hunts who now claim to follow scent trails and only ‘accidentally’ kill. But it also means that groups have formed to monitor these hunts, groups usually made up of volunteers who for example film hunts, report their crimes, and liaise with both the police – where possible – and members of the public who don’t want hunts on their land.
Charlie Moores met up with Lesley, Neil, and Jack, members of the Cheshire Monitors, to discuss how the group started, their work monitoring the three main active hunts In Cheshire, their good relationship with – especially – two of Cheshire Police’s wildlife crime officers, and their thoughts on the future of illegal hunting in the county.

At its AGM in October last year, the National Trust, one of the largest conservation charities in the UK, narrowly voted to licence fox hunts to trail hunt on their land, much to the dismay of animal welfare groups.
Charlie Moores talks with Jack from the campaign group National Distrust and Cathy from West Midlands Hunt Saboteurs about the licencing of hunts and in particular the notorious Warwickshire Hunt which rides on National Trust land and has been given a licence to hunt despite numerous apparent breaches of the Hunting Act.

Every Boxing Day the rump of what remains of Britain’s fox hunts meet up with their horses and dogs and parade through country villages. Depending on your point of view, they’re either a thrilling sight in their scarlet or green uniforms or simply a nuisance that blocks narrow roads and disturbs what should be a pleasant Boxing Day walk. This gathering of the clans is, though, a statement of intent, because though chasing wild animals with dogs has been illegal for more than a decade many hunts haven’t yet given up on what they claim is a traditional and well-supported country sport. So what’s the reality – is fox hunting a well-supported sport or an anachronistic and illegal minority activity that serves no purpose in a modern country?
Charlie Moores asked Eduardo Goncalves, chief-executive of the League Against Cruel Sports, what he thinks about the Boxing Day Hunts.

The National Trust is one of the largest land owners in Britain and licences a very large number of ‘trail hunts’ on its land. ‘Trail hunts’ have been observed breaking the law on numerous occasions. An NT member will be asking the charity to ban this form of hunting on its land at the charity’s next AGM.
Charlie Moores talks with the grassroots organisation National Distrust and the charity League Against Cruel Sports to find out more.

Spurred on by myths and misconceptions about foxes and their behaviour, husband and wife duo Sue and Trevor Williams set up the Fox Project in Kent in 1991 as a wildlife information bureau and humane fox deterrent consultancy dedicated to the protection of the red fox.
25 years on, Sue talks to Charlie Moores about the organisation’s ongoing struggle to improve the public’s perception of the wild animal, as well as their work rescuing, rehabilitating and releasing approximately 700 foxes per year.