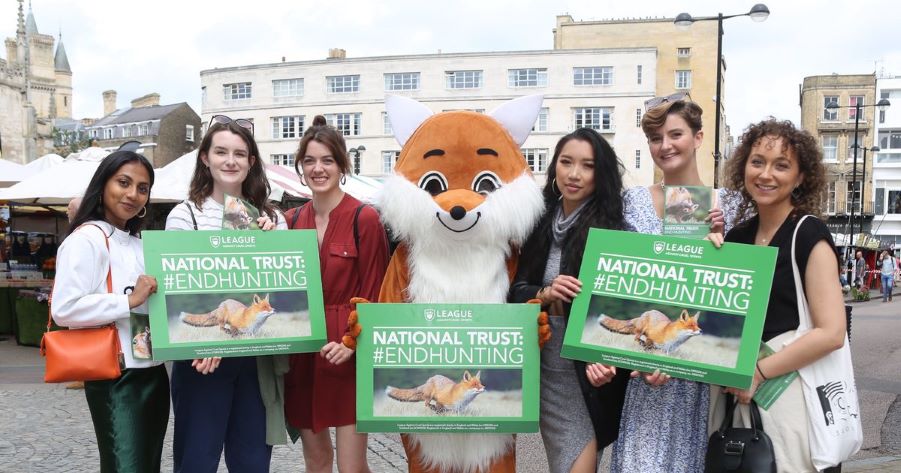 END_OF_DOCUMENT_TOKEN_TO_BE_REPLACED

There is no such thing as so-called ‘trail hunting’. It was invented by fox hunts after the passing of the Hunting Act 2004 (which banned hunting with hounds) and is a smokescreen for illegal fox hunting – even the Masters of Foxhounds Association seems to agree with that. Hunts up and down the country routinely break the law, cause chaos on main roads, use violence against monitors (who are only present to stop wildlife crime taking place), lose control of their hounds, and use terrier men to illegally block or interfere with badger setts. Hunting can sue us if it can prove otherwise – it can’t, and it won’t anyway because the last thing it wants is to have its filthy laundry dragged through the courts…So why does the National Trust, one of the nation’s most respected conservation charities and one of its largest landowners, allow so-called ‘trail hunting? Because its Chair (and soon to be former Chair) used proxy votes at the Trust’s AGM in 2017 to vote down a proposal that the National Trust should stop issuing licences to hunts to use their land. The Trust has been forced to explain its highly contrary position of protecting wildlife while facilitating hunting ever since, referring questions on social media to the disingenuous “Our position on Trail Hunting” page on its website.

END_OF_DOCUMENT_TOKEN_TO_BE_REPLACED

Literally every week more examples of poor snaring practice are highlighted in the media. Two such examples have been highlighted across social media this weekend by the Hunt Investigation Team and Moorland Monitors. In the first, a badger was found trapped in a snare which was “wrapped around its neck”. In the second, a dog was caught on in a snare set on Access Land on Kinder – National Trust land in the infamous wildlife crime hotspot of the Peak District ‘national park’. Incidents like this are understandably always upsetting for the owners of companion animals, but let’s also acknowledge that the snare was set to do exactly what it did: trap an animal. Dogs and foxes are closely related. they share the same capacity for sentience, for fear, for feeling pain. Unlike a pet that is (under most circumstances) fed and looked after by an owner, a wild animal has no choice but to hunt to feed itself and its family though. Countless thousands of foxes are being trapped and are suffering in snares like this every week, drawn to the overabundance of prey that shoots ‘provide’.

END_OF_DOCUMENT_TOKEN_TO_BE_REPLACED

The once seemingly impervious walls that fox hunting had built around itself with the invention of so-called ‘trail hunting’ are crumbling fast. Following on from the decision to suspend ‘trail hunting’ by Forestry England because of the secretly-recorded and leaked Hunting Office webinars, the National Trust has just announced that they too have paused ‘trail hunting’ on their land and will not be issuing any licences for the remainder of the season (which ends in March). This is another huge blow for illegal fox hunting. A highly respected charity has taken another look at ‘trail hunting’ and decided that – at the moment at least – it wants nothing at all to do with it.

END_OF_DOCUMENT_TOKEN_TO_BE_REPLACED

Warning – distressing image in this post:
Wiltshire Hunt Saboteurs yesterday witnessed a hunting hound used by the Mendip Farmers Hunt – whose website proclaims “We love to see visitors and children and we hunt Wednesday and Saturday in the season” – killed on the busy A39. Apart from the absurdity of even being able to state openly that they ‘hunt twice a week in the season’ (‘hunt’ not ‘trail’ or ‘drag’ hunt, and how is there even a season for this disgusting hobby?), apart from the chilling notion of involving children in bloodsports, how – all right-minded people will be asking – if hounds were following a laid-down scent as they were supposed to be, how could they have ended up on a main road dodging cars?

END_OF_DOCUMENT_TOKEN_TO_BE_REPLACED

It’s not that we’re deliberately looking for stories linking Yorkshire with wildlife crime, it’s more that they just keep turning up. When it’s not the region’s gamekeepers shooting or poisoning birds of prey, it seems that its so-called ‘trail hunting’ fox hunters can’t help breaking the law either. As a report in the Hull Daily Mail puts it rather prosaically, “Two men have been charged after allegedly allowing dogs to hunt a fox in East Yorkshire”.

END_OF_DOCUMENT_TOKEN_TO_BE_REPLACED

We’ve written many times about the National Trust (NT, one of the UK’s most important conservation charities) and its unfortunate affair with so-called ‘trail hunting’ (see a National Trust and Trail Hunting 101 for example). We’d rather not have to keep repeating ourselves, but so-called ‘trail hunting’ is a clear example of the war on wildlife, we exist to help tackle that war, and there is no good reason whatsoever for the NT to facilitate ‘trail hunting’ on its land. It’s not just us that thinks this of course: no-one outside of hunting thinks one of the country’s most respected charities should be allowing fox hunts to break the law on charity-owned land.

END_OF_DOCUMENT_TOKEN_TO_BE_REPLACED

The Guardian newspaper has a piece today about how wildlife has repopulated closed National Trust properties (the Trust is one of the largest landowners in the country, and with over 5 million members potentially one of its most influential). It says that “The National Trust is reporting that emboldened wildlife, from raptors and warblers to badgers, otters and even orcas, appear to be enjoying the disappearance of humans from its gardens, castles and waterways across the UK“. Is this the same NT that facilitates illegal fox hunting on its land? Indeed it is…