There is no such thing as so-called ‘trail hunting’. It was invented by fox hunts after the passing of the Hunting Act 2004 (which banned hunting with hounds) and is a smokescreen for illegal fox hunting – even the Masters of Foxhounds Association seems to agree with that. Hunts up and down the country routinely break the law, cause chaos on main roads, use violence against monitors (who are only present to stop wildlife crime taking place), lose control of their hounds, and use terrier men to illegally block or interfere with badger setts. Hunting can sue us if it can prove otherwise – it can’t, and it won’t anyway because the last thing it wants is to have its filthy laundry dragged through the courts…So why does the National Trust, one of the nation’s most respected conservation charities and one of its largest landowners, allow so-called ‘trail hunting? Because its Chair (and soon to be former Chair) used proxy votes at the Trust’s AGM in 2017 to vote down a proposal that the National Trust should stop issuing licences to hunts to use their land. The Trust has been forced to explain its highly contrary position of protecting wildlife while facilitating hunting ever since, referring questions on social media to the disingenuous “Our position on Trail Hunting” page on its website.

END_OF_DOCUMENT_TOKEN_TO_BE_REPLACED

Cheshire Monitors, the group that works to expose cruelty to wildlife in and around Cheshire and the North West, including fox and hare hunting, badger baiting and their related crimes, have launched a petition asking the Duke of Westminster to honour his late father’s wishes and ban so-called ‘trail hunting’ on his Cheshire estate. Cheshire Monitors write on their Facebook page that, “…in 2004, before the enactment of the Hunting Act, which banned the hunting of wild mammals with a pack of hounds, the then Duke of Westminster, who owned the 11,000 acre Eaton Estate in West Cheshire, vowed to stop hunts using his land if they broke the law: “I respect the law and if the law of the land comes in in February I will stick to it.” However, the current Duke of Westminster (Hugh Grosvenor) has continued to allow the Wynnstay, Cheshire Hounds and Cheshire Beagle hunts access to land at Eaton Estate.

END_OF_DOCUMENT_TOKEN_TO_BE_REPLACED

This is a tale of everyday countryside activities (at least, everyday when so-called ‘trail hunting’ is involved) but there is something here we all need to consider: one of these people – how can we put this politely, is being economical with the actualité. So, according to a report on the BBC, Teri White, an alpaca breeder in Northumberland, is claiming that hounds from the Tynedale Hunt had got on to her land near Hexham on three occasions, chasing “newly-weaned alpacas into a corner, terrifying them”. A hunt spokesperson, on the other hand, claim that “a few hounds did “drift” on to the land but did not chase or harm any animals”. Which are two very different things indeed. Hmm, it’s just so difficult to say who is the more believable, eh…

END_OF_DOCUMENT_TOKEN_TO_BE_REPLACED

Here’s a headline for all hunt supporters, all hunt apologists, for all hunt lobbyists and for all pro-hunt MPs who continue to tell us constituents that hunts only go ‘trail hunting’ – “Fitzwilliam Hunt apologises after funeral ceremony disturbed by “20 to 30″ hounds”. How the hell do you explain that away? In a year that has seen such tragedy, such loss of life, so many communities turned upside down and inside out, so many families separated, so much grief, how do you explain away the notorious Fitzwilliam Hunt (who have an open invitation to ‘Come Hunting’ on their homepage), losing control of their hounds and allowing them to run through a crematorium as mourners were trying to cope with the loss of a loved one? What possible excuse can you come up for this?

END_OF_DOCUMENT_TOKEN_TO_BE_REPLACED

A few days ago the National Anti Snaring Campaign released news of a Little Owl found dead in a fenn trap on the Queen’s Sandringham Estate. The trap had of course been laid by a gamekeeper to ‘protect’ pheasants – ‘protected’ until a royal shooting party wandered up and killed them of course. Much criticism was directed towards the Royals themselves. They have repeatedly been called out as hypocrites, purporting to be pro-conservation while being renowned for the huge number of birds of mammals they have shot or hunted on their various estates – Boxing Day still sees gatherings of royals of all sorts and all ages blowing birds out of the December skies – and on overseas trips. Prince Charles, president of the National Trust, notoriously called fox hunting ‘romantic’ in 2002 and was reportedly furious with Tony Blair for the Hunting Act. This isn’t an ‘anti-Royal’ rant incidentally (though it will be characterised as such): it’s much more a questioning of the ethical principles of charities that align with individuals connected so closely with – and so supportive of – shooting and hunting, royal or otherwise.

END_OF_DOCUMENT_TOKEN_TO_BE_REPLACED

As we noted yesterday, the reverberations from the secretly-recorded Hunting Office webinars released by the Hunt Saboteurs Association in November continue to be felt. In a landmark decision Peterborough Council supported a motion to ban so-called ‘trail hunting’ on its land, stating that “This Council resolves to do everything within its legal powers to prevent trail hunting, exempt hunting, hound exercise and hunt meets on its land”. And now Councillors at Cheshire West and Chester Council have backed a similar motion that paves the way for a ban, voting to devise a new policy reflecting the “damage” caused by so-called ‘trail hunting’

END_OF_DOCUMENT_TOKEN_TO_BE_REPLACED

As we (and everyone else interested in the demise of fox hunting – and yes, we know it’s illegal already but hundreds of hunts go out thousands of times a ‘season’ using the smokescreen of so-called ‘trail hunting’) reported last week, the so-called Hunting Office, which ‘runs’ fox hunting out of its HQ in Cirencester, was burnt badly when webinars discussing how to avoid being caught hunting were leaked by the Hunt Saboteurs Association. There has now been an interesting development, according to a series of tweets started by a well-known activist with the Twitter handle @herbieharry. A well-aimed tweet asking why no police action seems to have been taken was responded to by Paul Netherton OBE, Deputy Chief Constable for Devon & Cornwall Police and picked up by Hunt Watch UK.

END_OF_DOCUMENT_TOKEN_TO_BE_REPLACED 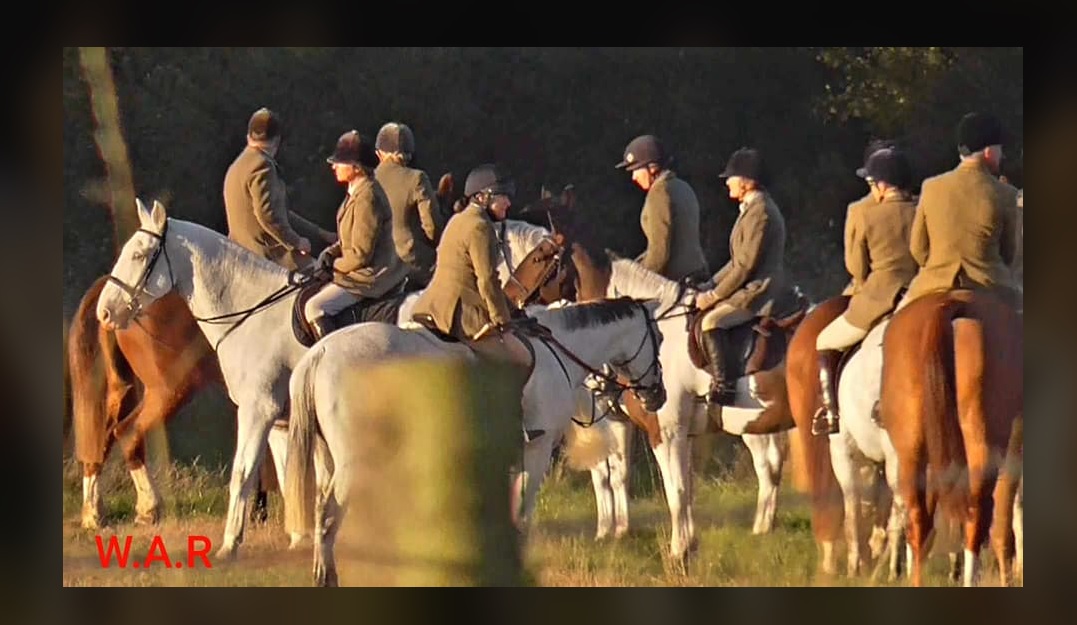